My three year old son is a regular Mass-goer. Aware of his very short attention span, we make sure to sit in the front each and every Sunday. He loves when there is singing, especially chant. He loves elaborate processions. He loves incense and stained glass. He loves churches.

But, it is the words that bore him. Through the eyes of my son, I have noticed how much of the Roman Rite requires an understanding of speech.

Music in the Roman Rite functions seemingly as an interlude to the actual work of liturgical praise. It's like, "Hey, it's getting wordy, let's sing something to give people a break. Now back to the reading. We're worshiping God!"

Last Sunday, we went to the Melkite Liturgy on campus. The entire liturgy, as anyone knows who has attended Eastern liturgies, is sung. Despite our son's lack of familiarity with the words on the page, he hummed along the entire time (sometimes even during the Eucharistic Prayer). With his slight speech delay, with his limited grasp of understanding of English, the chant allowed him to participate in the Eucharistic sacrifice in a way that he rarely experiences.

Not once did he ask to leave. Not once was he bored (though he did perform frequent prostrations and crossing of himself).

To this Catholic, we have to admit that music too often functions in our parishes as quaint interludes between the rationalism of speech. Our liturgies are wordy, sounding more like bad speeches than prayer. Why would anyone believe that we're participating in the very liturgy of heaven itself?

If this is heaven, perhaps, I do not want it. It seems really boring.

The chant of the Roman Missal should be normative in our parishes. Priests should learn to sing. We should chant the readings, the Psalm, the Creed, the Intercessions, the Eucharistic Prayer, the Pater Noster. Everything that can be chanted.

This isn't a matter of being conservative or liberal.

It's a matter of learning to offer that divine sacrifice of praise with the entirety of our bodies. To let our voices be taken up not simply in the reading of a book to a bored collection of spectators but in the Eucharistic sacrifice of heaven itself.

It is about letting children, who are natural singers, engage in the liturgy as they should: with the offering of their voices to God.

It is the simplicity of the chant tunes, their grounding in the human voice, that makes them so easy for children to learn.

Children understand this. My son gets this. It is the rest of the Church that needs to catch up.

The Liturgy Is for (Little) Kids

Timothy O'Malley, Director of the Notre Dame Center for Liturgy, on why we should encourage (little) kids in church. 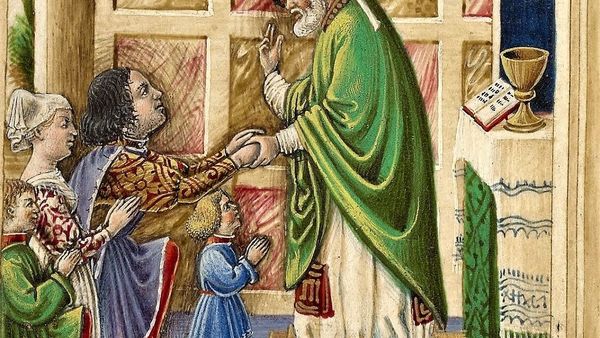