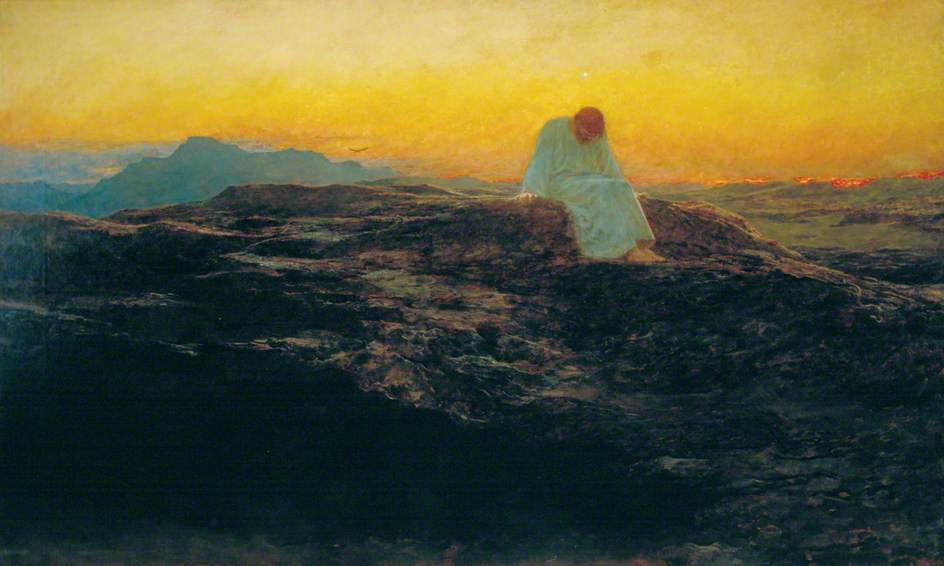 Parents of young children are aware of the pushing of boundaries that our children perform when beginning to exercise their newly discovered will. If a hungry or sleepy toddler is told not to throw their stainless steel train, it is very likely that said toddler will launch this toy across the room with maximum velocity. The child will then stare into the eyes of the exasperated parent, daring mom or dad to do something about the transgression. Of course, this childhood propensity to push boundaries does not disappear as we mature into adulthood. Human sin is a testing of God’s boundaries—a childish immaturity that desires our will to be done at all costs.

In the Gospel of Luke, we see that authentic sonship, real childhood, is a matter of loving obedience. The temptation narrative highlights the vulnerability of the beloved Son, who enters into the desolation of the desert.

The one whose birth was announced by angelic song manifests the fullness of his humanity, wanting to eat and thus be sated. Yet, the invitation to end this hunger is offered by the devil, the prince of disobedience. As John Milton notes in Paradise Lost, the devil is the figure who proclaims, “Better to reign in hell than to serve in heaven.”

The temptations in the Gospel of Luke are invitations by the father of lies for Jesus to exert his authority over God the Father, to create his own realm of self-reign. The invitation to transform stones into bread is not really about hunger but an offer for the Son to reject his status as a fellow citizen of men and women dependent upon the natural order. The proposition for Jesus to take power over the kingdoms of the earth is a way to convince the beloved Son that he could do infinite good for the world by one momentary act of idolatry. The request for Jesus to throw himself off the parapet of the Temple is an intentional perversion of the Son’s obedience in which he trusts the entirety of his will to the Father.

In each instance, Jesus responds by demonstrating what radical sonship consists of: not grasping, not seizing, and not testing, but the obedience of love.

During the season of Lent, we, too, enter into the desert to relearn the obedience of the Son. We often think this about this process as one of self-sacrifice, of self-abnegation—a denial that conforms us more to God’s will. But, the sacrifices of Lent are occasions of worship in which we remember our identity as beloved sons and daughters of the Father. Like Israel, we bring forth the first fruits (Dt 26:2) of our prayer, our almsgiving, and our fasting as a memorial offering of love to the Father, who liberated us from the slavery of sin and death.

Our sacrifice must not become a stoic exercise whereby we demonstrate to God that we are capable of controlling our passions, of avoiding all temptations. Instead, Lent is the time to practice the sonship of Jesus—an obedience that is born out of the fruit of love itself.

This kind of obedience to the Father is not about denying the gift of creation. Instead, we fast, we pray, and we give alms so that we might learn to live once again in radical dependence upon the Word of God. We do not live on the bread of power, of prestige, of self-reliance, and of independence, but on the Eucharistic bread that is God’s very love poured out for the world.

This article originally appeared in Our Sunday Visitor: Newsweekly on February 3, 2016 and is reproduced here with the permission of the publisher.

Featured Image: Briton Rivière, The Temptation in the Wilderness (1898); courtesy of Wikimedia Commons