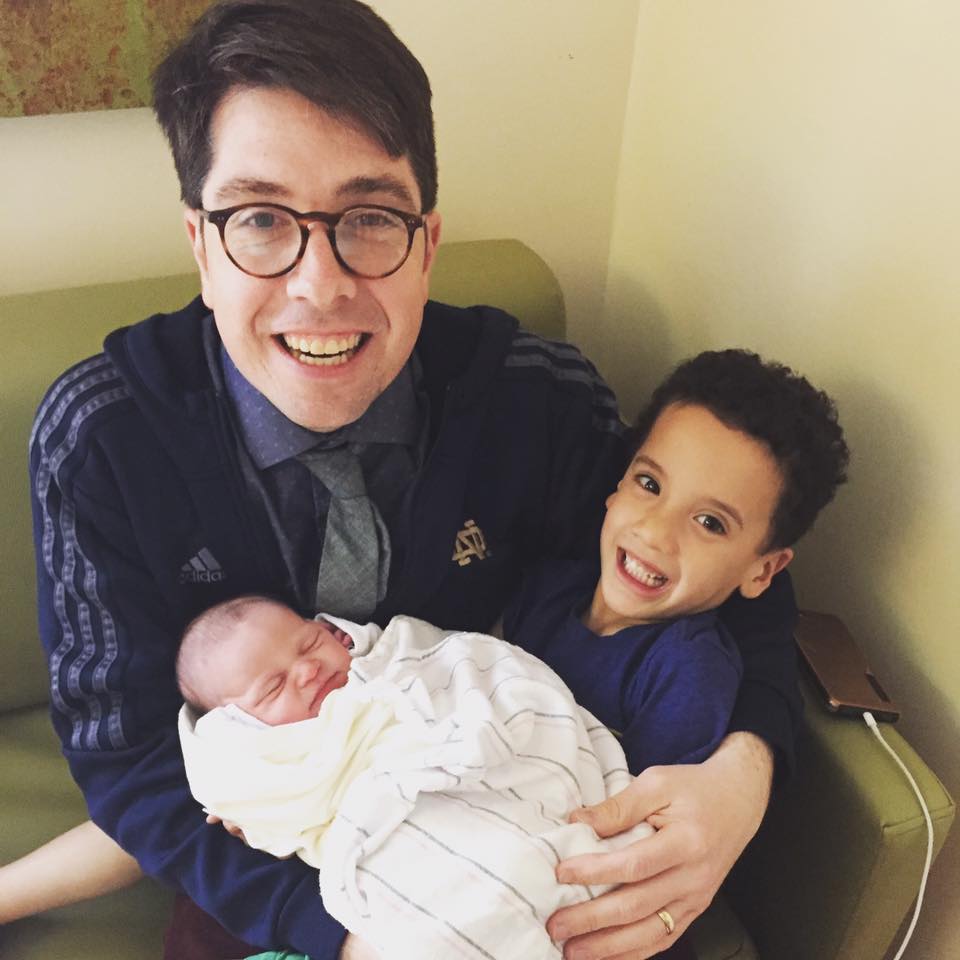 "I hope that you'll have one of your own one day."

Anyone who has adopted a child has heard this statement more than once. As an adopting parent of two children, I've learned to grit my teeth and smile, offering this gentle retort, "Well, I happen to see my children as my own. But thank you."

The simmering anger that normally accompanied my response has dissipated over the years. I've replaced the rage with a reasonable question: why is my well-intentioned questioner so concerned about having a child who is biologically one's own?

Biological parenthood, of course, is a good. The human race does need to be propagated. The wonder of sexual union (in addition to it often being fun) is the possibility of a new life coming into existence. From the mutual affection of man and woman, from self-gift, a child may be born. The child takes on characteristics from the mother and father, reflecting back to husband and wife the gift of their union. From the result of the love of two, a third is born.

And it is precisely the birth of this third that complicates the claim that the child is one's own. Of course, the child is one's own insofar as the child has genetic material from both mother and father. Legally, the parents are responsible for care of the child (hence the reason the state enters into legal claims regarding marriage in the first place).

But, in a certain sense, no child is strictly speaking the property of the parents. The child comes as gift, a being with a unique imagination, will, a sense of self that is not equivalent to either one's father or mother. In other words, the child is a person separate from both father and mother.

From the moment of conception, the developing baby acts in a way that neither father or mother can control. The child may share biological material with both mother and father. But, the language of "having your own child" is an illusion: the coming into existence of every child is a gift, the creation of a third that is not one's own. The father and mother, although there are evolutionary reasons to do so, must learn to love the child who is not equivalent to one's self. They must create a space of hospitality where the third, the new baby, can dwell.

But we do not live in a perfect world. And the act of adoption thus becomes a moment of hospitality that functions as an icon of parenting as a whole. To have a child means to welcome a creature into the world, to love someone who is not one's own. Adopting parents can testify that this act of hospitality is no more difficult than the virtue of hospitality that must infuse every act of parenting (biological or adoptive). To commit oneself to raising a child who does not share biological material with either parent is an act of love that bonds child and parent together. This bond, created through the hospitality of love, is ultimately what matters in parenting as a whole.

Adoption reminds us that every act of parenting is a moment of hospitality, a moment that allows love to flourish anew in the world. A love that is not reducible to the sharing of genetic material or the legal obligation to care for the child. But a love that always comes as gift.

It is fitting for this reason that the Scriptures speak of our own relationship with God as adoption. In Ephesians, we hear from St. Paul:

According as he hath chosen us in him before the foundation of the world, that we should be holy and without blame before him in love: Having predestined us unto the adoption of child by Jesus Christ to himself, according to the good pleasure of his will. (Eph. 1:4-5)

The creation of the world is the first act of divine hospitality, where creatures are made children of a God who is not involved in biological procreation. Who is not "needy" but creates from nothing, as an act of pure gift. It is this God who becomes flesh, who dwells among us in Christ, adopting the human condition as his own. We are adopted into the relationship that Christ has with the Father, a relationship that is not biological. For we are creatures not gods. Our relationship with God is one of pure gift. We become children of the living God not through genetics but through an act of love, an act of divine hospitality.

Adopting parents thus become sacramental icons of this divine hospitality. They manifest to the world a love that is not limited to obligation, to ties of kinship (no matter how important these ties are). They show the created order that the meaning of all love, all parenting, is found in the radical act of hospitality shown by God.

The goal of parenting in the end is not "to have one's own." Instead, it is to create a space where the child can experience a love that always comes as gift. A love that is not the result of obligation or requirement.

Editorial Note: Throughout the month of October Church Life Journal will explore the sanctity of life and the hospitable imagination. What we mean by the hospitable imagination is the ecclesial formation of a way of seeing the world that is more spacious and welcoming. It is a way of seeing that recognizes the inherent sanctity of life and seeks to heal the perceived division between life issues and social justice issues. Catholic Social Teaching teaches us that a radical hospitality for life at all its stages and solidarity with the weak is cruciform. As our authors explore the various dimensions of the hospitable imagination (please click the link for a list of the posts), we invite you to think along with us.