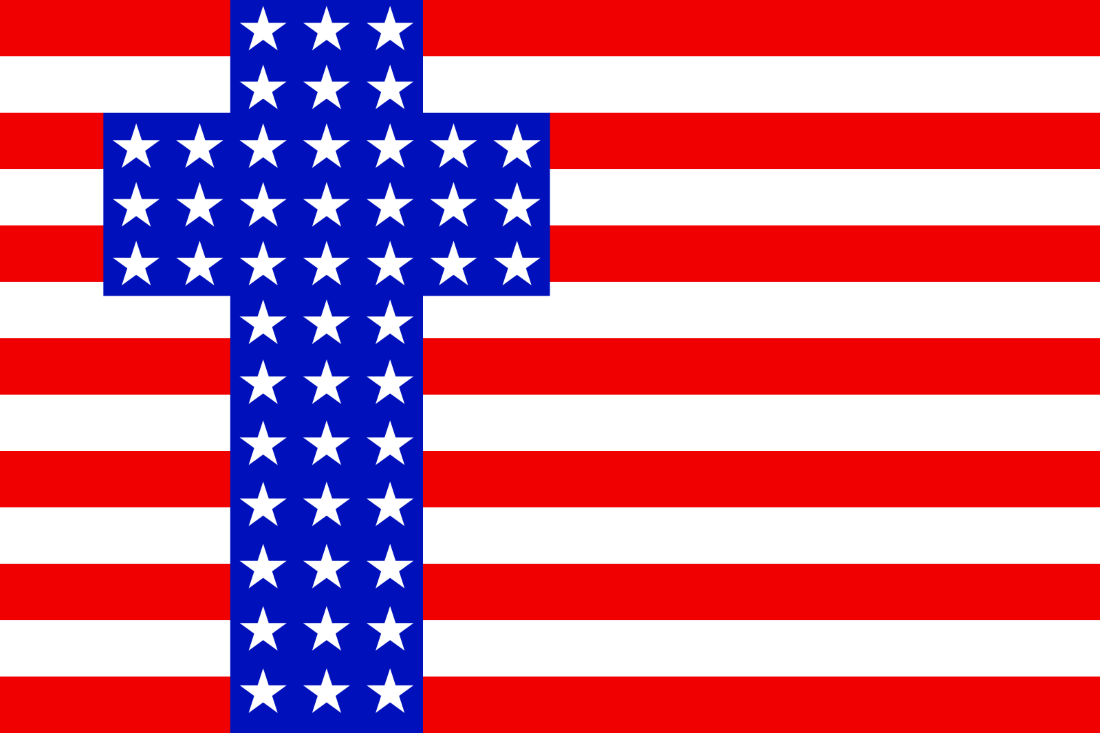 When Vice President Mike Pence delivered his speech at the Republican National Convention, it was like witnessing a Walker Percy satire. Pence remixed Hebrews 12:1-2 and 2 Corinthians 3:17, by replacing “Jesus” with “Old Glory,” the “saints” with “this land of heroes,” and even interjected his own biblical gloss—“that means freedom always wins.”

People rightly recoiled from Pence’s failed attempt at civic religion. How could the Vice President replace Jesus “the author and perfecter of our faith” with the American flag? Why would he substitute American heroes for the saints? And, what definition of freedom could Pence be using to conclude that “freedom always wins”? After all, the American sense of Scripture is not one of the classic senses of Scripture. Those would be the literal, allegorical, moral, and anagogical senses.

If you have read Percy’s Love in the Ruins, which is about—as the subtitle tells you—“The Adventures of a Bad Catholic at a Time Near the End of the World,” then Pence’s speech would sound strangely familiar. Published in 1971, the apocalyptic novel opens on July 4, Independence Day, in “the old violent beloved U.S.A.” with an antihero very much like Dante lost in the woods, waiting for the destruction of the world. The story rewinds to show readers how the character got to this point in time, to the seeming end of everything. Hearing Pence’s speech in 2020, the year of plague and protest and doomsdayers, I recalled Percy’s novel and the comic sermon of Monsignor Schleikopf, the parodic priest of the American Catholic Church.

In Love in the Ruins, the Roman Catholic Church has split into three groups, one of which is the American Catholic Church, whose new “Rome” is Cicero, Illinois. The protagonist Tom More attends church there with his mother to celebrate Property Rights Sunday, a major feast day for the church.

Unlike its forebear, the American Catholic Church “emphasizes property rights and the integrity of neighborhoods, retained the Latin Mass, and plays 'The Star-Spangled Banner' at the elevation.” As congregants are meant to reflect on the mystery of Christ’s dead but life-giving flesh in the Eucharist, the church listens to the victorious anthem. The irony is thick here. Christ was crucified by the Roman government, so, by all worldly accounts, he lost to the reigning earthly power; while “The Star-Spangled Banner” came to be because the flag still waved after the British attempted to siege Fort McHenry. In other words, the Americans celebrate their victory with this song, but the Eucharist calls us to accept worldly defeat for divine gain.

Pence spoke at Fort McHenry intentionally, with a wall of flags lined up behind his podium, so that the setting resonated with his triumphal words. Similarly, Percy’s character Dr. Tom More enters a church not decorated with icons of saints, painted windows that allow God’s light to permeate through crazed glass, or towering spires that point the sinner upwards. Rather, he notices a “blue banner beside the crucifix [that] shows Christ holding the American home, which has a picket fence, in his two hands.” More than Christian nationalism, this image replaces the ambition of the faithful for eternal things with “treasures on earth, where moth and rust destroy and thieves break in and steal” (Matthew 6:19). Although Monsignor Schleikopf preaches from the Gospel of Matthew, he does not account for Jesus’s sermon which rejects worldly treasures. Instead, he emphasizes the winners: “Joseph of Arimathea, a rich man, believed in Christ and gave him his tomb” and “Lazarus was not a poor man, that he lived comfortably with his sisters in a home that he owned.”

In the Sermon on the Mount, Jesus condemns hypocrites who pray loudly before all the people in order to be heard. He instructs people not to “babble,” not to use words meaninglessly that sound religious but lack substance. The whole sermon focuses on humility, lowliness, piety, the virtues needed to understand the sermon itself. While Jesus teaches on a mountain, he sits down before his disciples. Always Jesus exhibits Paul’s description of him in Philippians 2: “Existing in the form of God, [Christ Jesus] did not consider equality with God something to be grasped, but emptied Himself, taking the form of a servant.” In contrast, Monsignor Schleikopf picks the passages that suit his thesis. With his lens of wealth and American rights, the fictional priest argues, “Our Lord himself, remember, was not a social reformer, said nothing about freeing the slaves, nor are we obliged to.” He can alter the gospel to make his point.

What Monsignor Schleikopf demonstrates by bastardizing Scripture is the need for the aforementioned virtues—humility and piety—to interpret Scripture well. In Sanctified Vision: An Introduction to Early Christian Interpretation of the Bible, R.R. Reno and John J. O’Keefe examine Patristic interpretive lenses to draw examples for how we should read Scripture. Unlike modern biblical interpretation, which leans heavily on reading with reference to external sources, the intensive approach of the Church Fathers was to look within the whole book, to read within its totality. They saw exegesis as “a spiritual discipline” in which readers should “dwell in the clear teachings of Jesus” and “the great theological pronouncements of Paul” and struggle continuously “through the thickets and brambles of seeming contradiction, blank oceans and dry deserts of obscure and uncertain material.” This way of reading assumes the authority of the text, that the authors of these words are higher than the reader.

From politicians to priests to the seven-year-old child who advises her dad “not to provoke [his] children to wrath” (Ephesians 6:4), readers are guilty of interpreting Scripture with specific agenda and weaponizing it to our advantage. “Everybody has his filter,” writes Henri de Lubac; yet Joseph Gordon reminds us that Scripture “can provoke readers and hearers to check their filters” that we may be more read by the Word than impose our reading on it. In De Doctrina Christiana, St. Augustine distinguishes between use and enjoyment: “those only are the true objects of enjoyment which we have spoken of as eternal and unchangeable” (DDC I.22). Only God is to be enjoyed, the “rest are for use, that we may be able to arrive at the full enjoyment of the former.” When we declare changeable, perishable things as our end—victory for a nation, property rights, etc.—we will misuse the text.

If our interpretation of Scripture prioritizes our country, our gender, our race, or any of our personal goods over the love of all our neighbors, then we do not understand the Word of God. Augustine offers this concise rubric for correct interpretation:

Whoever, then, thinks that he understands the Holy Scriptures, or any part of them, but puts such an interpretation upon them as does not tend to build up this twofold love of God and our neighbor, does not yet understand them as he ought (DDC I.36).

Just as it is the end, love is also the means. Love is the primary virtue needed to interpret Scripture rightly. Lest you misinterpret even that sentence, I am not talking about the Beatles’ kind of all you need is love, but the love that the whiskey priest talks about in The Power and the Glory, the love “that might even look like hate. It would be enough to scare us—God’s love. It set fire to a bush in the desert, didn’t it, and smashed open graves and set the dead man walking in the dark. Oh,” the priest admits with a shudder, “a man like me would run a mile to get away if he found that love around.”

We should approach the Word of God with a love full of fear and trembling, and we should walk away from our reading in awe of its exalted mystery. As Gordon writes, Christian reading “requires one to have an openness to mystery, to transcendence, to perplexity and to suffering . . . one must lay down any desire to control God or God’s authority.” Christ-like, we sit down before the Scripture, acknowledging how high it is above us. Only this pose before the text assures that we will not pretend to speak on God’s behalf, to manipulate his words for our own gain. As Flannery O’Connor quips, “A God you understood would be less than yourself.” If we claim too much to know his meaning, we might find we have created a very small god, one that stands under us, so to speak, rather than the other way around.

If we do not submit ourselves to the authority of Scripture, we will imitate Monsignor Schleikopf, who finds no evidence in the scripture for social reform or freeing slaves. And, this priest is not Percy’s model: the man’s German name means “cunning,” a reference to the snake in the garden of Eden (or, according to Google translate, “clever dick”). Through Monsignor Schleikopf’s lens of interpretation, our God and our country become conflated. The novel ends on Christmas Eve with churchgoers exiting the building crying out, “Hurrah for Jesus Christ!” and “Hurrah for the United States!” in the same breath. You do not have to reach very far to imagine the world of August 26, 2020 where preachers thank the Vice President (or any number of Democrats as well) for showing them how we “can bend our knee to Christ in faith and stand for our flag in freedom.”

In response to Pence’s speech, some Christian leaders denounced his idolatry, a great start to warding off Percy’s “Christ-forgetting Christ-haunted death-dealing Western world.” However, if we want to avert the American apocalypse, we need better readers and thinkers of the Word. As Americans, we should prioritize reading well, learning what words mean, why context matters, and how to be comfortable with mystery. At some point, we need to recognize that humility is a more worthy virtue than the vice of pride and that freedom does not have to “win” to be worth fighting for. Instead of fixing our eyes on these things which will pass away, we should look further out and higher up. We should pledge allegiance first to the God under whom this nation stands.