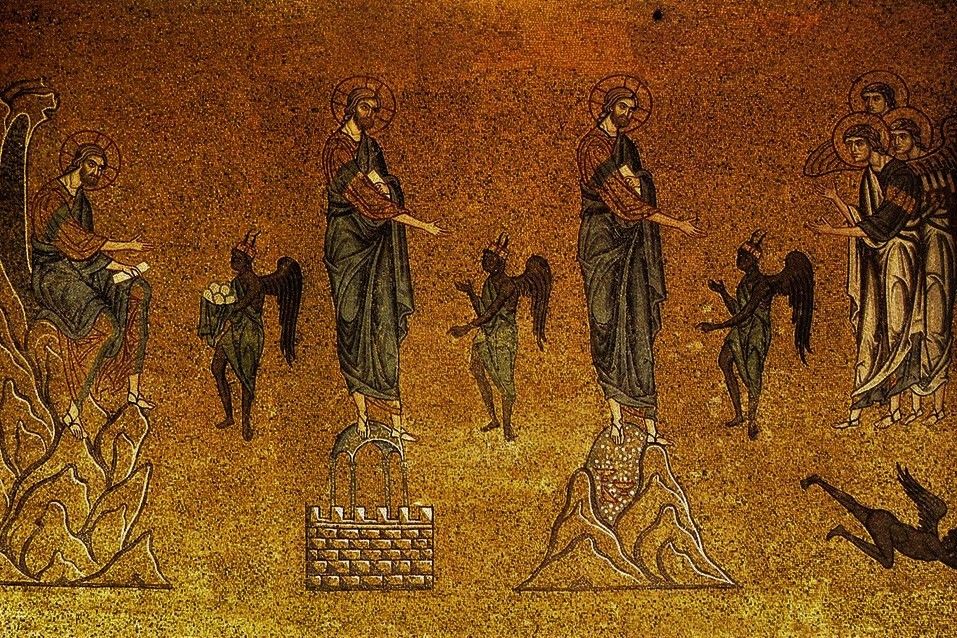 Next Wednesday commences the Church’s annual celebration of Lent. The feasting of Carnival season will give way to fasting, alms-giving, and prayer. The goal of this season is not merely to discipline ourselves for the festive celebration of Easter, as if “the best Lent ever” will give way to the “most excellent Easter.” Instead, during the season of Lent, we must come face-to-face with a fact about the human condition:

Something is wrong with us. And perhaps more importantly, we can’t fix it.

Christ’s temptation in the desert in both Matthew and Luke diagnoses our malaise. The Reformed philosopher, social scientist, and theologian Jacque Ellul provides an interpretation of this moment in Christ’s life, one that sees in these three temptations “the sum of the temptations that man can encounter.”[1] Jesus is first tempted to turn stones into bread, by the supposition that material needs are the most important dimension of human life. Christ’s responds to the Devil’s tempting by teaching that the divine word of obediential love is what is ultimately determinative of the human condition. Ellul writes:

What matters is that we realize that man’s attitude before God is one of waiting, of prayer, of hope, of supplication that a word of God will be granted, and with it all else. Man must not adopt the attitude of conquest, of seizure, of self-realization. He must not repeat the act of Adam and lay his hands on the forbidden fruit.[2]

Human flourishing is not the result of a process of self-creation. We cannot save ourselves through technological innovation or self-help manuals. Technology is not a benign tool for us to use that will answer every question that the human heart has. Self-help manuals, especially those disguised as religious books, presume that if only we carry out the strategy, we’ll be healed. Both assumptions lead one to conclude that we’re okay. But that’s not right. Only the act of divine obedience will heal us, giving our wills over to a word that is not our own.

The second temptation that Ellul addresses is the conquering of the kingdoms of the world. Such a temptation deals with the perils of power:

Whatever may be the means of power, whether money, personal authority, social status, economic structure, military force, politics, artifice, sentimental or material extortion, seduction, spirituality influence, what is proposed by Satan is power in any or every form.[3]

Jesus Christ rejects this power in the name of a radical service. He does not seize control over the kingdoms of the world but instead serves humankind through the politics of the cross. Such a political strategy does not conquer one’s opponent but instead loves unto the end. It does not mean that power disappears. Ellul is not naïve.

It means that those with power live as if they do not have it, emptying themselves of such influence.

Ellul points out that the abuse of power can infect the Church. Ecclesial leaders, especially the ordained, can play the game of power politics among the hierarchy rather than seek to transform the world in Eucharistic love. Dioceses and pastoral presses employ approaches to evangelization that influence not through the suasiveness of the cross but through slick marketing techniques.

The sexual abuse crisis, now a global phenomenon, functions as the idol (anti-icon) of such a grasping of power at all costs: the protection of those who abused the most vulnerable to protect the Church. This power is the temptation of each and every Christian who must be willing “to obey God, and thus to worship God alone . . . ”[4]

The last temptation that Christ encounters is to demonstrate proof that he is the Son of God. Ellul comments:

This is the temptation of all those who want to assert themselves, who want to be independent of God, who reject their situation as creatures, who think that alone and by themselves they can fulfill man’s vocation and find the key to life, or the meaning of their history within it, either in a universe of their own fabrication or gods of their own invention, in sum, in anything but the God of Jesus Christ.[5]

For Ellul, scholars, artists, the religious person, and the intellectual often fall prey to this temptation. The theologian in particular can imagine that only he or she can reconstruct the tradition in a way that allows men and women to encounter God. The pastoral minister can present a dizzying array of artificial requirements to participate in the sacramental life of the Church. In each case, one seeks to make oneself the source of divine life instead of remaining obedient to what is revealed by the Word made flesh.

The practices of Lent are thus medicines for men and women who imagine themselves to be the center of the cosmos. We fast so that every dimension of our desire, including our hunger, might be offered to God. We are not creatures who find total fulfillment simply in material existence but ultimately through orientation of our desires to God. We give alms because we do not operate according to the economy of scarcity that is the source of power in the world but the economy of gift that is the powerlessness of the Word made flesh. We pray because it is our very bodies, our whole selves that must be returned to God as a sacrificial offering of love.

The problem with men and women, with Church leaders and the baptized alike is that we have come to the conclusion that we are capable of seizing divine life by force. Lent annually heals us of this deadly folly. We are creatures not the Creator. And thus, we process into the desert with Christ to learn to hunger and thirst for God alone.