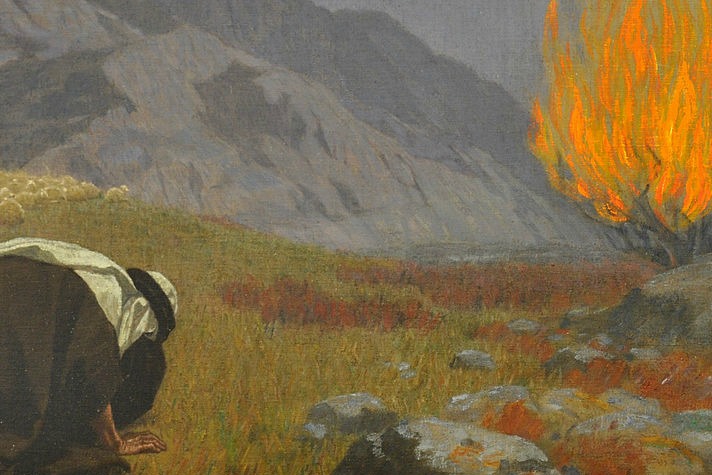 In the Sunday lectionary, there is often an obvious connection between the reading from the Old Testament and the Gospel. Yet, the third Sunday of Lent requires a bit of work from the reader to discern how the two texts are mutually illuminating.

In Exodus, Moses encounters the presence of the LORD in the burning bush on Horeb. God speaks to Moses, revealing that the presence of the LORD is in fact “the God of Abraham, the God of Isaac, the God of Jacob” (Ex 3:6). This God, who already has a long-standing relationship with the people of Israel, is responding to the cries of suffering that his beloved children have offered. This is a God who wants to rescue his beloved sons and daughters, bringing them into “a land flowing with milk and honey” (Ex 3:8).

Moses will be God’s steward in this liberating work but it will be the God of Abraham, Isaac, and Jacob who will reveal his might. Moses, though, wants to know a bit more. He asks God for a name that he might give to Israel so that the descendants of Joseph would know the precise deity who would be the source of their liberation. In asking for this name, Moses is also seeking to exercise some control over God insofar as to know someone’s name is to have power over them. Yet, God responds: “I am who am” (Ex 3:14).

Tradition has understood this name in a variety of ways. At one level, the name functions as a kind of veil in which the one who encounters God must recognize the inaccessibility of entering into God’s presence. Creation may exist. But, God is. The Hebrew letters (YHW) for this name were not spoken aloud or written because God’s name is holy.

At the same time, this inaccessible God has cast his lot with Israel: “This is what you shall tell the Israelites: I AM sent me to you” (Ex 3:14). The inaccessible name is nevertheless a name, revealing a God who has chosen to enter into a historical relationship with this particular group of people. A relationship in which Israel would often fail but God’s patience continually called Israel back to love anew.

The Gospel for the third Sunday of Lent provides an image of divine patience. The text begins with a dramatic motif, describing an otherwise unknown blood sacrifice of Galileans by Pontius Pilate. The mention of Pilate and blood already calls to mind Jesus’ own death at the hands of the Roman governor. The Gospel is calling our attention to the limitations of time itself, inviting the listener to repent anew: “If you do not repent, you will all perish as they did!” (Lk 13:5). If the Galileans do not have infinite time, if Jesus does not have infinite time, what about us?

But, God is patient. The barren fig tree, spared for a year by the gardener, is an image of all of Israel and thus of the Church. Though the tree has not yet produced fruit, God still tenderly cares for this relationship, hopeful that with one more year, the fig tree will blossom anew.

Each Lent, we begin the process of repenting again, of shaping our hearts to place God at the center of our own histories. And every year, the God of Abraham, of Isaac, and of Jacob waits with hopeful expectation for the renewal of our hearts. For the God who revealed his name in the burning bush, the God who revealed the fullness of his name as Jesus—this is our God of surprising patience and mercy.

This article originally appeared in Our Sunday Visitor: Newsweekly on February 17, 2016 and is reproduced here with the permission of the publisher.