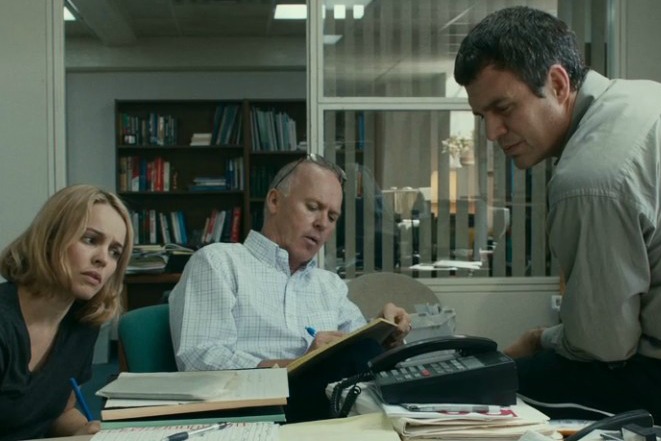 For Boston, For Church, For Conversion


As a Catholic who adopted Boston as home during graduate school, I found Spotlight a strange film to watch. At one level, the movie is a quintessential love story to that parochial city of Boston. There are the shots of Fenway Park, of south Boston, of autumn in the Common, and the full range of Bostonian accents. Yet, the film exposes the vices that are affiliated with the parochialism of a city in which the Church must be protected at all costs; in which loyalty to institutions is a supreme virtue and thus the folly of the human community. The opening scene sets the mood of the film as a lawyer arrives, ushered into a police station to offer a quiet settlement to a family whose children have recently been abused by Fr. John Geoghan. Not a historical event, this settlement already demonstrates the implicit theme of the film, later quoted by Mitchell Garabedian: “If it takes a village to raise a child, it takes a village to let a child be abused.”

While Boston is the setting for Spotlight, the film itself is a journalistic thriller, a John Grisham novel turned into a movie without the threat of constant violence looming over the protagonists. The new editor of the Globe, an outsider to Boston and the Church alike, asks his investigative journalism team to do a bit more research into sexual abuse charges against priests in the Archdiocese. The team quickly discovers that sexual abuse among Boston clergy is an epidemic, one that has been supported by Cardinal Law’s movement of sexual abuser from parish to parish.

In some ways, Spotlight is not that interesting of a movie. This is not to say that the acting isn’t excellent, or that the plot is insufficient to hold one’s attention. Rather, the movie is a love story to the kind of long-range investigatory journalism that seems impossible to conduct in the Internet era. The journalists pour over news clips to find evidence of priests who may be perennial offenders. They go to court to sue for access to documents that have been sealed by the Church which would prove that the Archdiocese has systematically settled and covered up these abuse cases. They interview survivors of abuse and a psychologist who worked at a treatment center for priests. They verify the names of the priests who committed this abuse. Though at one point the psychologist notes that the Church will do whatever it can to stop this investigation from proceeding, there is no Dan Brown-esque albino monk threatening the journalists with violence if they continue to uncover the scandal. The film is the representation of the banality of evil.

The source of this banal evil in the film is the Church as a powerful institution. There are times in which a Catholic wants to scream out during the movie, asking for a bit of fairness. When the writers of the film allow a scene to unfold in which clerical celibacy is blamed for the sexual abuse crisis. When the film concludes with a list of dioceses in which sexual abuse cases have been discovered without simultaneously recognizing the drastic changes that have taken place in the Church during the last ten years (with much more work to do in many dioceses and seminaries). As a Catholic, you want a bit of relief from the misery, and you’re given nothing.

In that sense, perhaps, the film is best viewed during the season of Lent. The sexual abuse scandal is indeed a failure of the Church’s deepest identity as a communion of divine love, meant to draw the entirety of humanity into the Eucharistic love of the triune God. The most powerful element of the film is listening to the survivors tell their stories. Because the “sexual abuse scandal” has become part and parcel of our language, one forgets that what we’re dealing with is not an abstract scandal but very specific wounds that the Church has inflicted upon those on the margins: the poor, those who have absentee fathers, those who turned to the Church in need and became victims of disordered power and desire.

But the movie doesn’t just blame the Church. Everyone gets their fair share of blame. The Boston Globe could have written the story sooner. The Archdiocese’s lawyers could have said something, anything to the Cardinal. It is the fault of the village. And the film highlights that there are those who said something, including then-auxiliary Bishop of Boston John D’Arcy, that beloved saint transferred to Fort Wayne-South Bend, who spoke up out of love for the victims. He challenged a system that forgot to love as Christ loved the world. In Bishop D’Arcy’s letter, one receives a glimpse of the kind of care that should have been offered by the Church but wasn’t.

Watching the film, therefore, is a necessary penance for those who call themselves Catholic. Hans Urs von Balthasar writes in his Life Out of Death:

Only today is the motto “Écrasez l’infâme” (Crush the infamous) fully carried out. This is a noble title, no matter how much the Church in her long history has admittedly called this nobility into question by persecuting others. Perhaps as the one persecuted, she must atone for many things for which she is responsible. She will need to remind herself of that in every age. (78)


No matter how much the movie gets wrong about clerical celibacy or about the Church’s response to the abuse crisis in the past decade, it is salutary to be reminded of the wounds that our beloved Church has inflicted upon the world. Somehow, a Church in Boston (and not just Boston as the last scene points out) began to think that it was God. A Church in Boston began to see the priesthood as a source of political and social power and not as a radical call to imitate Christ’s self-emptying love. The temptation for the Church to become a divine power play in the world is one that we can quickly forget. And when the Church does, she becomes an idol instead of an icon of divine love for the world. The Church is indeed Christ’s Body, but a body in the midst of being healed. Spotlight may be our medicine, our call to conversion.

There is a stunning scene toward the end in which the films’ writers, entirely unaware perhaps, offer a way forward for the Church in a post-scandal world. One of the journalists notes that he loved the Church when he was younger; but now, how could he come back to an institution that is so corrupt? An institution he imagined that he would again belong to . . . but can’t. In this, we have an image of those emerging adults who came of age in an era in which fundamental institutions failed them. The Church. The United States. The economic system. Who can be trusted?

The answer, of course, is not to leave behind all institutions. As embodied creatures, this is an impossibility. Instead, at the end of Spotlight, I became well aware that the Church is called to renew trust in all institutions, to form women and men who embody Christ’s sacrificial love in their ministry, in their teaching, in their administration, in their work in the world. To call the Church back to her truest identity as the beloved bride of a Bridegroom who calls us to love unto the end.

There is work that is still required to transform the Church in the United States from an institution concerned about self-survival to a missionary community of disciples called to the margins. Seminaries may provide far better formation into a healthy sexual life, but the desire for power and prestige can always lurk around the corner. The Church is therefore called to atone for our sins in the world, to stand as one who has nothing left to proclaim but Christ crucified. And to walk with all the victims of the world, learning again that our power is displayed in the weakness of love unto the end.

Spotlight probably won't win the Oscar for Best Picture. But, it's a film that's far more important for Catholics than that: it's an invitation to do penance for all that we have done and all that we have failed to do to protect the vulnerable among us. It's a hard and painful medicine to swallow. But, the best medicines often are. Spotlight is one such medicine for Boston, for the Church, for all of our conversions.