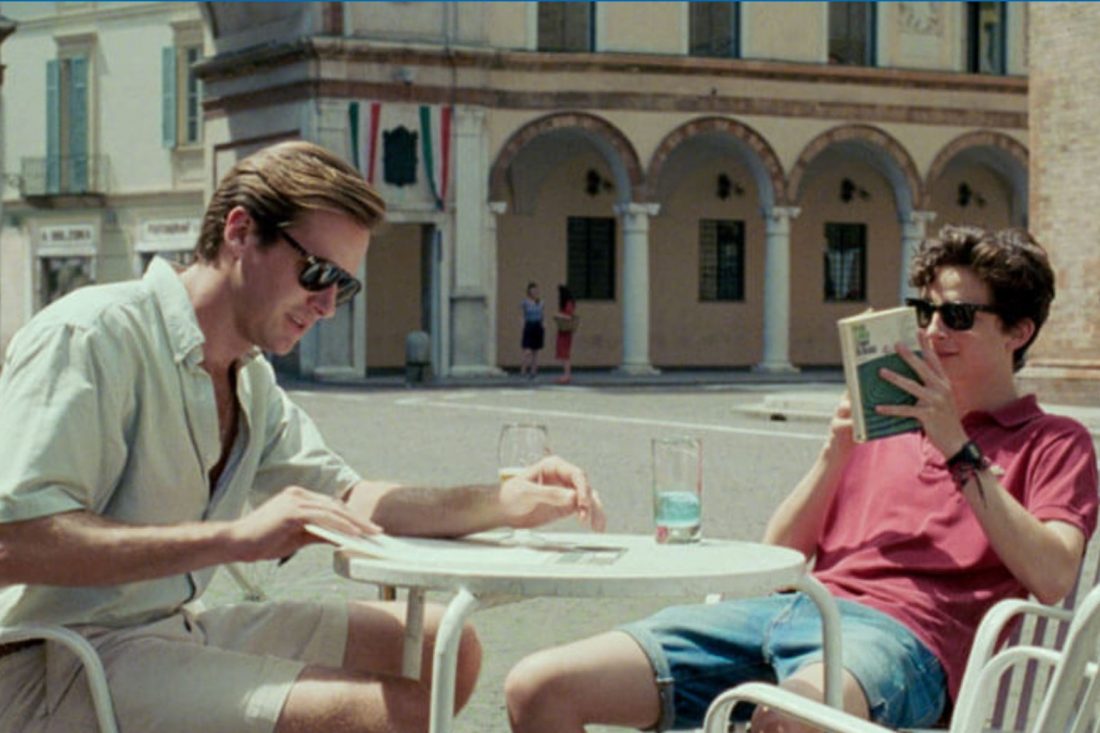 Is it a video? Call Me By Your Name’s final moment is an elegantly enigmatic yet unambiguously poignant shot of Elio (Best Actor nominee Timothée Chalamet) staring into a roaring winter fireplace, transfixed by the memories of his summer romance with Oliver. The long unbroken take as the credits roll over his face is accompanied by the repeated refrain of Sufjan Stevens’ “Visions of Gideon” murmuring its yearning question: “Is it a video? Is it a video?” This last moment crystallizes the course the film charts: the troubling ambiguity of falling in love (or not) with an Other.

Call Me By Your Name, based on André Aciman’s 2007 novel, is a tour-de-force portrait of desire which has prompted flurries of controversy concerning power imbalance, pedophilia, agency, and the depiction of queer romance on screen. This review will not attempt to enter those debates, but instead will attempt an explanation of why this film would necessarily raise those discussions.

The project of a theological sexual ethics is interested in reconciling the unbounded qualities of eros with the rightly-ordered self-giving of agape. It can be difficult for those concerned with a theological sexual ethics to watch a film which confuses or challenges that reconciliation. Admittedly, the film is totally ill-equipped to answer the question: “Should this kind of relationship happen?” But, what is undeniable is that what we see on screen does happen, in many different forms, in all our lives. The essential beauty of Call Me By Your Name lies in its close attentiveness to eros’ impact upon a person, creating an honest portrait of human encounter.

As the first chords of John Adams’s ebullient “Hallelujah Junction” shimmer beneath the opening titles, the film overwhelms the viewer with a joyful, disarming beauty. Opening the shutters of his windows, Elio reveals the arrival of the de-stabilizer of his peacefully dull Northern Italian summer vacation—Oliver (Armie Hammer)—the new summer house-guest slash graduate student assistant to Elio’s professor father. In spite of himself, the young Elio is instantly attracted to and soon overwhelmed by the confident, virile beauty Oliver radiates.

Call Me By Your Name captures, with insightful precision, a portrait of a person caught in desire—the small, breathless moments of delight and burning disappointment which constitute their daily existence. The soundtrack bursts with enchantingly eclectic sounds, but the real music of the film is the symphony of daily moments of charged encounter whose stinging barb is the saturation of meaning that rests behind each simple exchange or routine ritual. Director Luca Guadagnino paints a portrait of attraction through this kaleidoscopic mosaic of daily life lived in hyper-awareness of the other’s presence which anyone who has ever had a crush will recognize.

Whatever the age difference, the power imbalance I saw in the film is Oliver’s apparent knowledge, right from the get-go, that this meeting of minds, of souls, of bodies could potentially hurt Elio—“I don’t want to mess you up,” Oliver warns him. Oliver seems to recognize that Elio is susceptible to be hurt in a way he himself will not be. For the film’s bleeding Bildungsroman heart lies in Elio’s journey of learning how his own desires can simultaneously lead to heights of encounter formerly unknown, and depths of pain previously unplumbed. The film follows Elio’s—not Oliver’s—experience of finding himself at the mercy of his desire and discovering this overwhelming desire, which inundates him is not a neutral force. It can actually reshape and harm him.

Humans have an openness, a “plasticity” which allows them to enter into relationships that can actually transform their identity. A person has the ability to turn the Other into the organizing principle (the logos, if you will) of their life. Who we give our hearts to, and how we go about giving them, is the razor’s edge upon which we determine who we will become.

Such a sacred act of love, most intimately expressed in the physical union of sex, demands ritual—to protect it, to impress upon our thick minds its gravitas. Acts of love are acts of choice in which we determine our identity. Because the act of letting someone into our intimate interior has an objective sacredness, it has always been wrapped in a thick protective armor of mores, taboos, and religious rituals. Who we fall in love with, who we invite into the inner rooms of our hearts and beds, who we make the organizing principle of our lives, matters.

It matters because that Other does not just meet us, but also changes us. In fact, humans are all-too-capable of desiring a subject, of making someone the organizing principle of our lives who may not bring us to our full, authentic self, who could, potentially, harm us. Our cultural canon is full of stories of those in power desiring those they have power over, of those who have no power desiring the one who has power over them. Eros and boundaries can make for antagonistic bedfellows.

This is the truth reflected in the debates encircling the film: Is Oliver’s and Elio’s relationship moral? What is the difference in their ages? Who has the power in the relationship? What does it mean? This film’s perceptive and provocative depiction of desire and love naturally prompts these questions, because it resonates deeply with our own experiences of loving and desiring. Moral concerns about who and what we love follow close on the heels of any experience of love or desire.

Eros draws us to an Other, an act which precedes the question: ought I to desire this Other? Humans ask moral questions about love because the sacred event of encounter of the Other—love—is the core of who we are.

And tragically intertwined with this encounter is the extension of our ravenous ego out into the world, devouring others as objects—lust. Through these lusts and loves we find the power to discover our true being or to destroy it, and the distinction between the two is not always apparent, even to ourselves. The film recognizes this, I believe, and makes moves (of varying success) toward either softening the boundaries between these lovers or offering an apology for the validity of their love. But the truth that resounds in Elio’s story is that we humans are drawn by desire into an encounter with another almost in spite of ourselves, and, often, the results are inextricably interwoven wheat and tares sown deeply into our hearts.

In the film’s final shot, Elio wrestles with questions which are at the heart of the human experience: what to make of an encounter with an Other which has both wounded us and shaped us. Were we being used as objects for an Italian summer fling? Or were we actually encountering another in love?

Featured Image: Screen capture from the "gallery" section of the Call Me By Your Name official website, Fair Use.