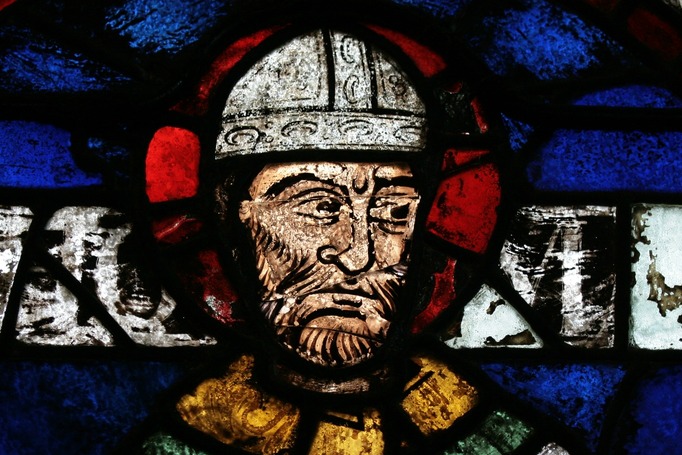 “I give my life

—Murder in the Cathedral, T.S. Eliot[i]

Thomas Becket, whose feast of martyrdom is observed today, is a highly celebrated figure of English Christianity, commemorated in painting, verse, and drama since his 12th century assassination.

The story of Thomas Becket’s unlikely rise to Archbishop of Canterbury is chronicled in Peter Glenville's film Becket (1964). Although it tells the story of Becket’s martyrdom, the heart of Glenville's tale is Becket’s friendship with Henry; he frames the film with scenes of Henry II at Becket’s tomb, addressing his deceased friend. Becket sets up a medieval buddy movie, which is ruined by God.

There is, of course, more to Thomas Becket’s story than simply his friendship with King Henry II. But the particular sacrifice of friendship, love, and loyalty that the film paints is a striking hue of Becket's portrait, and a touching testament to the singular witness that friendship plays in the life of faith.

The film starts with the puerile shenanigans of Becket and King Henry II, carousing throughout the night, making mincemeat of the clergy in the council chambers, and hunting (women) in every corner of merry old England.

Throughout these exploits, Henry barks out commands, shouting at peasants and courtiers alike, a petulant child and snarling lion. But this willful monarch acknowledges the quiet moral force that Becket exerts upon him. Reflecting on what Thomas has done to him, Henry muses that he was once, "a machine made for belching and whoring, and punching heads. What did you put in mine, Thomas, that stopped the machine?” Thomas’ witness has complicated Henry’s life, and transformed him.

Becket is content to pander to his king and protect the victimized citizens on the sly, until Henry appoints him Archbishop of Canterbury. "If the mitre is on his head, he will no longer be on your side,” says Becket, prophetically, of the role of bishop. In that mitre, the laconic, ironic Becket finds a deeper allegiance than to the crown, and a greater love. Becket declares in prayer, his new role is “like going on a holiday: I’ve never enjoyed so much in my whole life.” He has found a God who is not "a sad God after all,” but who has filled him with a joy lacking in his debaucherous escapades with Henry.

In serving God, Becket finds he can no longer be a slave to his friend's every whim, but can only bend to the will of the earthly king when it aligns with that of the Heavenly King's. When Henry opposes the Church, Becket must ever be a challenge to Henry. This is a surprise to Henry. He appointed Becket archbishop specifically to have a friend in the role of that crucial clerical ally. The sting of Becket’s betrayal is not just that of another clergymen opposing Henry’s agenda, it is the bitter betrayal of the friend who is always in your corner suddenly squaring off against you in the ring.

Becket’s conversion—turning away from Henry and towards God—is a bitter medicine for Henry to swallow. “No one on this earth have ever loved me, except Becket!” he roars, pacing about in his chambers like a caged lion. He feels the absence of Becket's friendship and companionship keenly, and duly seeks to make Becket feel it as well. He cannot forgive Becket for “preferring God to him." But, even in his rage, his love for his friend continues. “I’d give my life away, laughing, for you, Thomas,” cries Henry, pained, because he cannot see why Becket will not do the same (or, rather than giving his life away, simply giving Henry his way).

Think, then, of the power that these friends have when they contradict us. Expecting to embark on another conversation of mutual agreement, I launch into a complaint about a co-worker (he’s so dramatic!! This thing she did was absolutely uncalled for; any reasonable person could see this!!) and am instead greeted with a defense of the offending person, and a reminder of the broader truth of their humanity. When a bosom friend takes the side of a perceived enemy, when they call us to charity in the midst of our self-absorption, their words have immense power. The supportive friend who denies you affirmation of your opinion, and instead offers a challenge is a Becket.

The friends who challenge our pre-conceived notions, who push us to examine the world more deeply, who pose an obstacle to our comfortable clinging to our habits of being are Beckets. These are the friends who offer us an opportunity to encounter the great Other-ness of God, who are proof positive Truth is broader than our own experiences. Conversation with God is not always a conversation of congenial agreement, but often an encountering of contradictions. A friend like Becket forces us to confront the fact that God is not simply a convenient buttress to our pet opinions, or a pillar to support our own worldview. A friend can mirror the action of God, as a stone thrown at our edifice of self, crumbling our carefully constructed ramparts with the inconvenient force of Truth.

"The martyr," writes a successor of Becket’s, Rowan Williams, "dies in the affirmation of God’s lordship—the affirmation that God is the ultimate value to be loved and served."[ii]

And who can remind us better of this truth, whose witness sings the loudest, than the holy rebellion of those we consider most intimate to us? When those most loyal to us show their true allegiance lies elsewhere, it causes us to question who we ultimately serve. Am I God’s good servant above all else, or am I affirming no one’s lordship but my own?

A friend who is a fellow pilgrim on the road to God is dear, and a friend who is a sometimes-stumbling block on the easy, blind road of self-absorption is doubly dear. The witness of friends like Becket prompts us to examine whose law we live by, and whose love impels us to die to self.