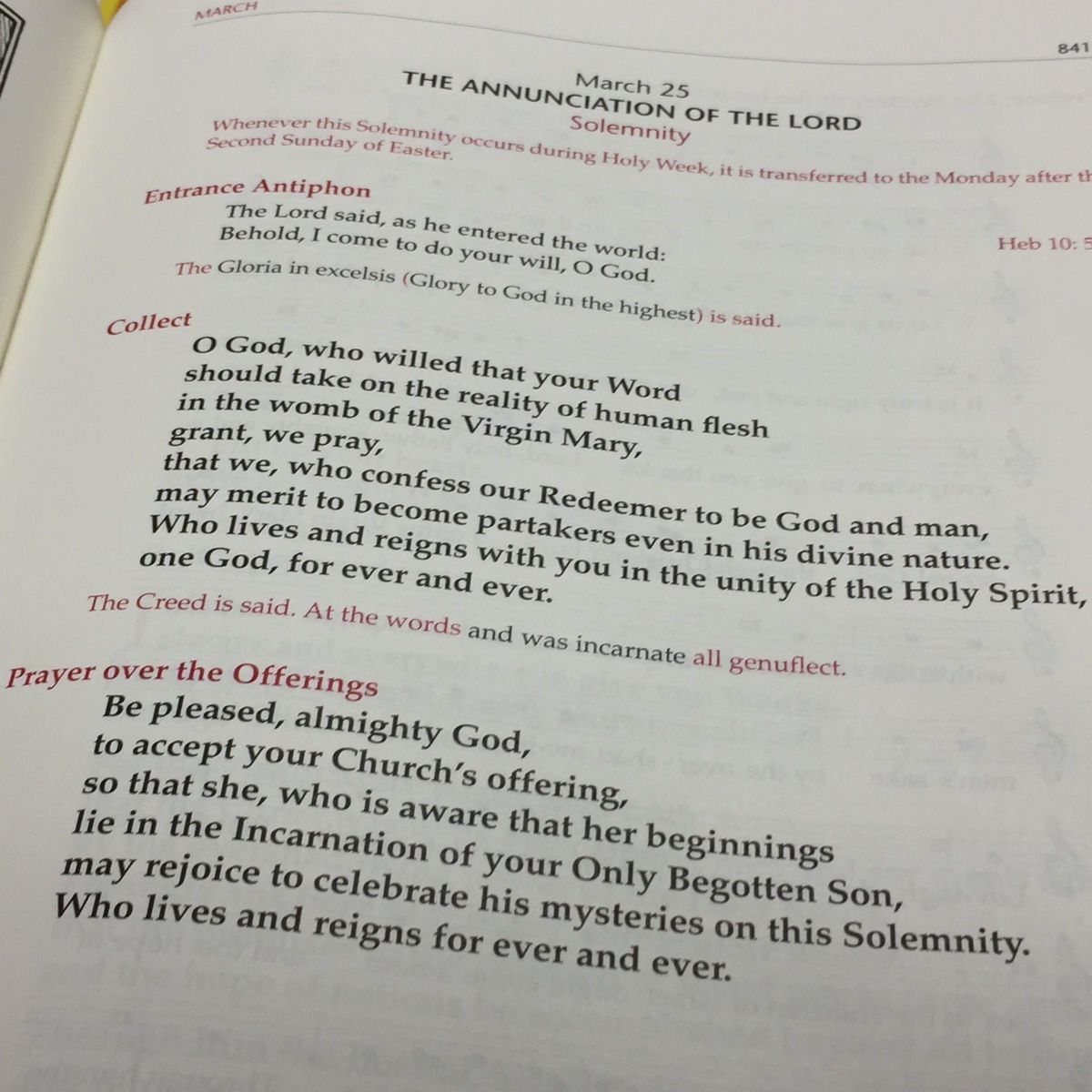 After the angelic song of the Gloria concludes, in which heaven and earth kiss, silence descends upon the assembly. The priest says, "Let us pray," and then a series of words follow that (if you're me holding a toddler performing acrobatics), you rarely listen to.

The priest says, "Let us pray." This invitation to prayer is not simply an announcement that the priest is finally to begin praying. This is the opening collect prayer, that which is intended to draw together the individual prayers of the assembly into a single voice before the Father.

Of course, you rarely get the sense that one is praying in the actual practice of the liturgy. The silence that is meant to follow the invitation to pray only lasts as long as it takes for the presbyter to find the words on the page. The text itself, somewhat complex in structure, is too often read by the priest like a middling actor in a school play.

But the prayer is meant to be begin in silence. This is the pregnant silence that proceeds an announcement of the most wonderful news. That God has acted in history through Jesus Christ; and God still acts among us. It is a real moment in which we as the assembly are lifted up in prayer.

This opening prayer has a structure. A structure best described as 1) God 2)Who 3) Do 4)Through. Let's use the opening prayer for the feast of the Annunciation as an example:

O God, who willed that your Word

should take on the reality of human flesh

in the womb of the Virgin Mary,

that we, who confess our Redeemer to be God and man,

may merit to become partakers even in his divine nature,

Who lives and reigns with you in the unity of the Holy Spirit,

one God, forever and ever.


God: In every one of these prayers, the Church addresses herself to God, the Father. All liturgical prayer is ultimately to the Father through the Son in the Spirit. This does not mean that we pray to God as a man (or as a woman for that matter). Rather, God is Father because God begets a Son. God begets a Son out of all time and space, because God is love. We are baptized into the name of this Son, and therefore, our entire lives unfold in light of this love. We become children of the living God, brothers and sisters of the Word made flesh. #nobigdeal

Who: The Mass is a prayer about history, about God's involvement in the unfolding of the world once upon a time and even now. On the feast of the Annunciation, we remember that the Word became flesh and dwelt among us. The Word entered a womb. The Word became vulnerable, became one of us. Assumed our identity, our flesh, our mortality. We go to Mass to remember this fact along with his life, his death, his resurrection, and his future coming in glory. The collect prayer always invites us to remember the wondrous deeds of the living God.

Do: But Christians don't remember what took place in Christ as a mere past event. Rather, what Christ has accomplished, what God has done, is still unfolding. When the Word became flesh, the Word stayed flesh. The Word died in the flesh. Rose in the flesh. Ascended in the flesh. Is glorified in the flesh. And we too are now invited to become partakers of this divine nature, of our flesh transfigured. Our resurrected flesh sits at the right hand of the Father. The embodied Jesus like us in all things but sin. The wounded and gloried Lord who knows our pains, our sorrows, and our sufferings. The risen Christ who knows our joys, our delights, our surprises. It is through this fleshy existence, this bodily life, that we will be saved. That God will invite us women and men to become divine. In our jobs. In our parenthood. In our marriage. In our priesthood. We are saved through the body. In the collect prayer, we are invited to long for the future of a world, of our world, of our very selves in light of what the Father has accomplished already through the risen Lord and his Spirit redeeming creation.

Through: The last "doxology" is mention of the Trinity. This is not simply "pro forma." It's because we have the confidence that our prayers are heard by the Father through the Son in the unity of the Holy Spirit. God hears us, because God is love. God longs for us to delight in God's self-giving love. For when we do, we are prepared to receive the Body and Blood of our Lord and to become this love for the world.

After the collect prayer, we sit in silence. Awaiting a deeper immersion into the saving memory of redemption in the Scriptures.