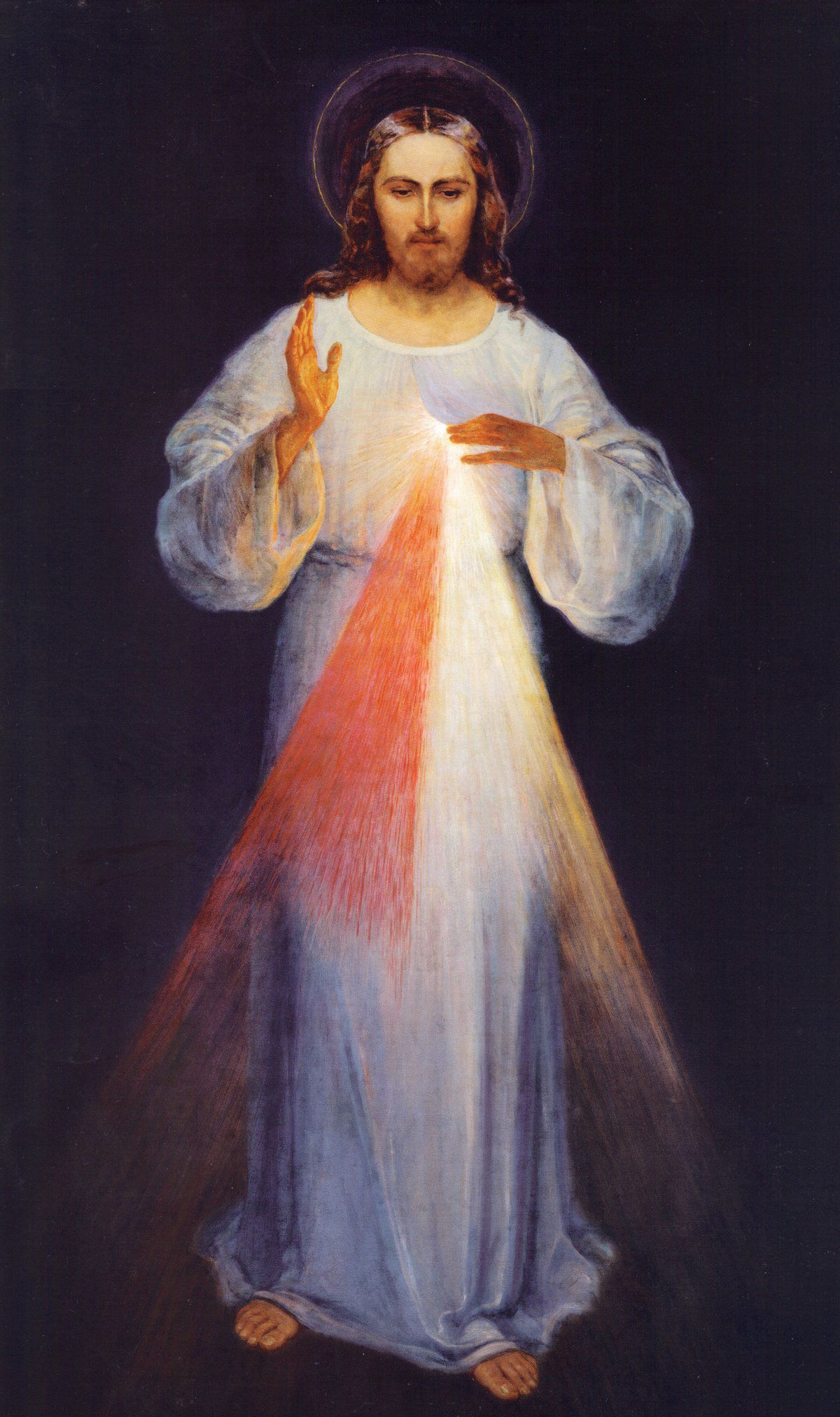 In March of this year the University of Notre Dame was honored to host Archbishop Gintaras Grusas of Vilnius, Lithuania and to screen the new documentary film “The Original Image of Divine Mercy”.[1]  Within Vilnius itself is the actual original image of Divine Mercy that was painted in 1933 by artist Eugene Kazimierowski under the direction of St. Faustina who received inner locutions and apparitions of Our Lord who directed her to paint the image that it might be publicly venerated and souls might come to know God’s mercy.

In the evening, when I was in my cell, I saw the Lord Jesus clothed in a white garment. One hand [was] raised in the gesture of blessing, the other was touching the garment at the breast. From beneath the garment, slightly drawn aside at the breast, there were emanating two large rays, one red, the other pale. In silence I kept my gaze fixed on the Lord; my soul was struck with awe, but also with great joy. After a while, Jesus said to me, “Paint an image according to the pattern you see, with the signature: Jesus, I trust in You. I desire that this image be venerated, first in your chapel, and [then] throughout the world. I promise that the soul that will venerate this image will not perish. I also promise victory over [its] enemies already here on earth, especially at the hour of death. I Myself will defend it as My own glory.”[2]

Because of German and then Soviet occupations and the ruthless tyranny of those regimes over religious expression, the original painting from 1933 was lost only to be rediscovered decades later. In that period of time hundreds of versions of the image were painted but of them all the original image is faithful to the particular vision given to St. Faustina. There exist hundreds of different artistic versions of the image of Our Lady of Guadalupe, but there is only one prized original with unique significance. Similarly, though different in nature, the original 1933 image of Divine Mercy holds unique significance insofar as it is the most faithful of all the Divine Mercy versions to the mandate given to St. Faustina.

The original image itself contains particular liturgical elements which we can first identify and then recognize those elements as cultural appropriations by a God who became flesh. Some of these elements are pointed out in the documentary film but here we wish to elucidate upon them further.

First, Our Lord's eyes are downcast while blessing.  St. Faustina was told that His gaze is as though from the cross and so His gaze is downward. The rubrics for the Mass as celebrated in the 1930s, what today is called the Extraordinary Form, direct the priest to look toward the ground at particular moments of the Mass including while blessing.[3]

Second, His right hand is raised in blessing and the hand’s height does not extend up past the shoulders nor does it extend further out from the right shoulder.  This too imitates the directives of the Mass pertaining to both the blessing of people and the orans position.

Third, Our Lord is wearing a garment, what we can consider an alb which is cinctured as would a priest.  Normally, while blessing, a priest wears a stole.  Here, of course, Our Lord does not wear a stole.  A stole is a sign of office and authority, but Christ Himself is the office of the priesthood, He Himself is the authority.

Fourth, the model for the painting was a priest, Fr. Michael Sopocko, and appropriately so.  A priest stands in a privileged way as Christ the Divine Mercy, particularly in the sacrament of reconciliation and generally when blessing.  The priest serves as alter Christus: in the sacrament, in the painting.

So, here we have cultural appropriation.  These four liturgical elements are not foreign to us nor unintelligible to the human mind. Cultural appropriation is a common element in divine appearances whether they be of Our Lord or of Our Lady.  For example, Our Lady of Guadalupe appears on the tilma of St. Juan Diego with the same skin color and facial structure as a mestiza woman.  Also, Our Lady of Lourdes spoke to St. Bernadette in her native French language, as did Our Lord to St. Margaret Mary Alacoque when revealing His Most Sacred Heart.  With the Divine Mercy interlocutions and the painted image which resulted, Our Lord adopted a posture that would be recognizable to those familiar with priestly blessings.

It could be pointed out that these liturgical aspects of the painting are there precisely because Sopocko – a trained priest - served as a model for the painter Kazimierowski! Surely this is the case. And yet the vision received by St. Faustina, the critiques and directions she gave to the painter, and the manner by which Fr. Sopocko served as a model all compliment one another and do not conflict. Thus the claim can still be made that the Divine Mercy image is yet another example of divine appropriation of cultural markers, including liturgical ones.

In fact, we can add a fifth liturgical element: Divine Mercy Sunday which is itself an extension of the painting and its message.

My image already is in your soul. I desire that there be a Feast of Mercy. I want this image, which you will paint with a brush, to be solemnly blessed on the first Sunday after Easter; that Sunday is to be the Feast of Mercy. I desire that priests proclaim this great mercy of Mine towards souls of sinners. Let the sinner not be afraid to approach Me. The flames of mercy are burning Me – clamoring to be spent; I want to pour them out upon these souls.[4]