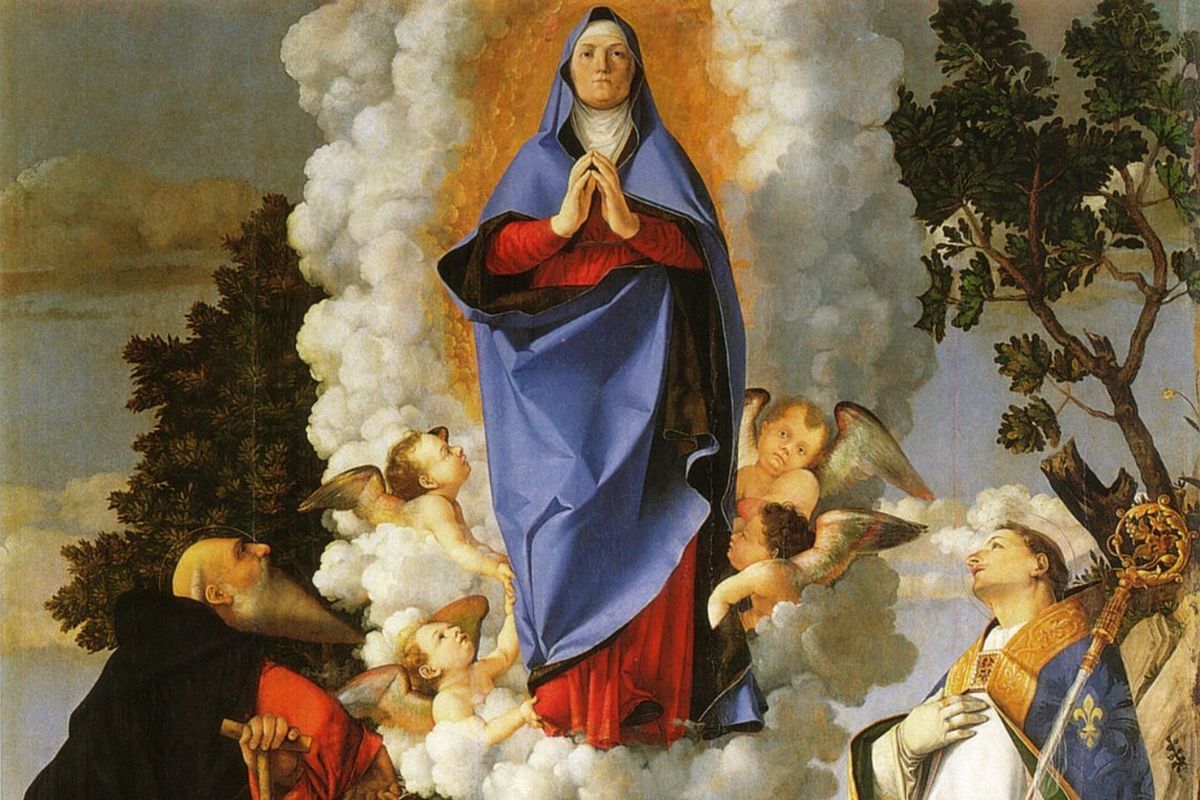 On November 1, 1950, Venerable Pope Pius XII in His Apostolic Constitution, Munificentissimus Deus (The Most Generous God) solemnly defined and decreed the dogma of the Assumption of the Blessed Virgin Mary. This is the teaching that Mary−because she was preserved from the stain of Original Sin inherited by the Fall of our first parents—did not undergo the corruption of the body at the end of her earthly life, but was lifted body and soul into Heaven. It is really an incredibly bold dogma, and one which can even scandalize our separated Protestant brothers and sisters, but it is very reasonable and meaningful, and is in need of particular attention in today’s world.

It is important to realize that this dogma was not invented in the 1950’s. As Pope Pius XII’s encyclical points out, this tradition is found in the ancient liturgical books of both East and West. It is also attested to by St. Sergius I, Pope in the late 17th century, who even prescribed a litany to be prayed on the feast. But this feast−although solidly grounded in the tradition−is also more than that. It reveals the wisdom of God and the importance of masculinity and femininity in the plan of creation. Every celebration of the Church does not just celebrate a random act of God, but a thoroughly intentional act, an action that means something. All of God’s actions in history reveal something about his design, and about us, his creatures. The Assumption reveals something to us about the central role played by relationality in creation.

God’s plan of assuming the Mother of God into heaven becomes intelligible when we reflect on Jesus Christ as the New Adam, and the Blessed Virgin Mary as the New Eve. St. Paul wrote, “For since death came through man, the resurrection of the dead came also through man” (1 Cor 15.21). This is true, but death did not come exclusively from Adam’s decision, but involved the cooperation of Eve, and indirectly came through her; both are responsible, of course, even as each played a different part.

Likewise, the resurrection of the dead came through Jesus Christ, but not directly, rather it was by way of Mary’s cooperation in God’s plan to become the Mother of God that led to the resurrection. God wanted the free cooperation of a woman, whom he preordained to be his Mother, to give him his human body and human personality in order to redeem the world. He did not force himself on the world, but ever so subtly entered into our history through the “yes” of one woman.

What this reveals is that humanity is essentially male and female, creation is essentially marital.  What it means to be human cannot adequately be expressed without both sexes, and just as at the beginning God’s relationship with our first parents was a relationship between him and a couple (both a male and a female) so now God redeems the world through the relationship between one man and one woman (not a married couple, but nevertheless one man and one woman working together). Christ saves as male only in union with a female, and what Adam and Eve were supposed to do together (but failed together), now Jesus and his Mother redeem together.

To clarify: Christ, the God-Man redeems us by his blood. It is his sacrifice that merits our salvation. He is the one mediator between God and man, but his human nature (his human body, soul, heart, and mind) came through Mary and were even dependent upon Mary. God chose to depend upon a woman to provide the body (the matter, the nature) through which he would redeem the world. It is good to remember that Jesus Christ not only is a reflection of the Eternal Father through the fact that he is the Son of God, but also reflects the image of his Mother as the son of Mary. He would have looked like his mother, the only one from whom he was born since he had no earthly father.

Mary is that important. The Son of God chose to be biologically, genetically, related to her. If the marital covenant is at the center of reality, then we are restored to being in the image of God through a male and a female in their union. Mary is the one with Jesus who fashions this new covenant between God and man.

This is a clear indication that gender is significant and not arbitrary in God’s design. Just as we use words to express things, so God uses things (things that he creates with an intention) to express a deeper meaning: things mean something for God, just like our words mean something for us. Audible words are not the only things that communicate meaning. Being a woman means something significant and reveals something about God, just as being a man does. Discovering what they mean can only be understood in relation, not in isolation.

This is something, the relationship between men and women, that Satan is constantly trying to destroy and divide, because it is the original and fundamental relationship in revealing and symbolizing God’s purpose and plan for reality, which is love. And love is ultimately the union of differences. Furthermore, the differences between men and women are not fundamentally oppressive but complementary; together they show the full picture of what it means to be human.

During a time of great confusion and frustration on the part of many men and women regarding the issue of gender it is important to look more deeply at the Solemnity of the Assumption. There is not only a King in heaven, but also a Queen. We do not have only a man in heaven but also a woman, both body and soul.

There is a certain completeness to God’s plan because the New Eve is now joined body and soul with the New Adam. Jesus Christ himself has chosen her as Queen and therefore as co-governor of history in a singular way.

All of us, to some degree participate in God’s guidance of history by our free will and cooperation, but Our Lady in a preeminent degree, even to a higher degree than all of the other saints and angels, for she is with her son physically in Heaven, entrusted with the task of nurturing souls back to God.

This solemnity should increase our devotion and trust in Our Mother, who with Jesus desires our presence in Heaven. Furthermore, this feast gives us a deeper insight into the meaning of masculinity and femininity in the creation and redemption by God.

Perhaps the way to receive the contemplative richness of this celebration is to meditate on the 4th Glorious Mystery of the Holy Rosary, the Assumption, and on the marvelous plan of God, who redeemed all of humanity in a perfectly human way: by one man, through one woman.

James Waalkes is a transitional deacon for the Diocese of Arlington, Virginia, and a student at Mount St Mary’s Seminary, Emmitsburg, Maryland.