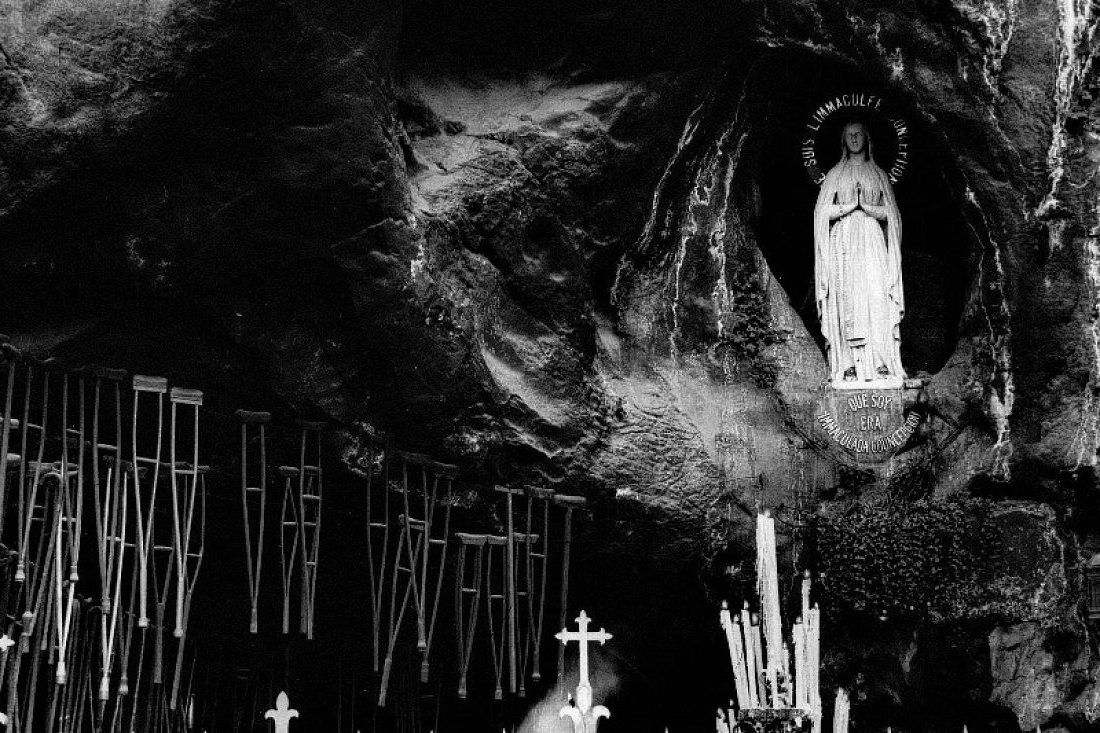 I don't promise you happiness in this life, but in the next.
—Marian apparition at Massabielle to St. Bernadette

The meaninglessness of suffering is a self-evident modern axiom. Who wants to suffer from pain? What is there to learn from pain other than learning what medications will treat it? Is it not normal to want to avoid pain and suffering at all costs? It seems perverse and backwards to suggest otherwise. The community of those who insist on pain’s therapeutic worth and intelligibility, who refuse to stop suffering, are pushed into margins of what is acceptable to modernity.

Yet, Pope Saint John Paul II made nonetheless the Catholic case for suffering against this tide of incomprehension in the Apostolic Letter, Salvifici Doloris. The pope’s reflections are a commentary on the following passage from Colossians: “I am now happy in the suffering that I endure for you” (1:24). John Paul II grounds his argument (delivered “on the liturgical Memorial of Our Lady of Lourdes, 11 February 1984”) in the foundations of Christian anthropology:

The joy comes from the discovery of the meaning of suffering . . . What we express with the word “suffering” seems to be particularly essential to the nature of man . . . Suffering seems to belong to Man's transcendence: it is one of those points in which man is in a certain sense “destined” to go beyond himself, and he is called to this in a mysterious way . . . The mystery of the Redemption of the world is in an amazing way rooted in suffering, and this suffering in turn finds in the mystery of the Redemption its supreme and surest point of reference.

All of this makes perfect sense for a theology historically rooted in the Cross, but it is in conflict with our worldview, which emerged around the same time as the Lourdes visions that occasioned the letter.

Sam Quinones, in Dreamland: The True Tale of America’s Opioid Epidemic, suggests how deep this conflict is. His award-winning reportage from the drug war trenches relates how pharmaceutical companies honed their marketing upon the modern rejection of pain to market their powerful pain-relieving drugs. The author convincingly argues that this successful campaign to stigmatize all pain as unacceptable inadvertently laid the foundations for the opioid epidemic ravaging America. The market-driven strategy to escape pain ironically caused incalculable pain in the end.

The longue durée history of this contemporary crisis goes back nearly two centuries, a decade or two before Bernadette’s visions of Mary’s message of redemptive suffering and healing in 1858. Beyond the Pyrenean village of Lourdes, a worldwide revolution in the application of anesthetics, chiefly ether and chloroform, began in the 1840’s (see: anesthetic history timeline). This seems like a rather mundane thing, but only because we can no longer imagine life without any palliatives. Ariel Glucklich’s Sacred Pain summarizes just how much this innovation shifted the self-understanding of much of humanity:

With the invention of anesthetics pain became strictly a medical problem and a matter that pertains to the body rather than the entire person. The individual in pain evolved in a patient, which is a juridical and ethical category—a possessor of rights over one's body and a temporary resident of a medical institution (the hospital). This replaced the premodern person in pain, who was first and foremost a member of a true community, and whose pain meant something far more significant than tissue damage (179).

Even after this astounding anesthetic revolution not all pain could be cured, nor, even more confusingly, could all cures be attributed to scientifically identifiable causes. That is one of the main reasons why Lourdes became the epicenter of a movement of resistance to the new paradigm—attracting worldwide attention, sometimes unwisely mocking, even openly flogging, the medical conventions of modernity.

Ruth Harris’s Lourdes: Body and Spirit in the Secular Age documents the unsurprising fact that the scientific community did not take to well to the mocking. It fell into excesses of its own. The leading 19th century men of science, and they were nearly all men, attacked the feminine upsurge from Lourdes, which consisted of Marian piety inspired by a young woman whose visionary experiences led to a communitarian movement of women caring for the sick and dying, and praying for miraculous cures. Freud’s future teacher—the neurologist and pathological anatomist Jean-Martin Charcot—developed the concept of “hysteria” (from the Greek: ὑστέρα, uterus) to cover what he deemed psychological symptoms of ungovernable emotional excess—supposedly endemic in women. Charcot, along with the realist novelist Emile Zola, then wasted several decades on writing unbalanced polemics that explained away everything at Lourdes as mass hysteria that could remedied with the right medications or institutionalization.

Miraculously, this episode ended in victories for both science and Catholicism. The end of the 19th century saw increasingly rigorous series of investigative medical bureaus organized at the shrine, most notably under Gustave Boissaire (active 1891-1914). Boissaire helped establish the current Lourdes Medical Bureau in response to Pope Pius X’s 1905 request that all claims of miraculous cures be submitted to a proper process. Ruth Harris argues that by the early 20th century Lourdes undermined reductionist philosophical models by both adopting stringent medical methodologies and outlining the limits of science by documenting cases that escape explication. This development led to a rapprochement between science and religion. It is represented by still widely-read thinkers such as William James and Henri Bergson.

This leaves us—if we use Cyril O’Regan’s helpful typology of modernity—with the history of Lourdes classifiable not as one of weeping (anti-modern), nor cheering (pro-modern), but as shadow-seeing. In other words, the protagonists of Lourdes assimilated, criticized, and developed modernity with premodern sources.

But where does it leave the overwhelming majority of people who were not cured at Lourdes? Furthermore, what about those whose sufferings might be caused, rather than alleviated by, medicine?

These cases would require the development of a critical ressourcement of the premodern theodicy ably sketched out by Eleonore Stump’s Wandering in Darkness:

She explains the rationale for this medieval reversal of modern commonplaces with a passage from Gregory the Great’s commentary on Job:

Since the human mind is hemmed in by the thick fog of its uncertainty among the divine judgments, when holy people see the prosperity of this world coming to them, they are troubled with a frightening suspicion. For they are afraid that they might receive the fruits of their labors here; they are afraid that divine justice detects a secret wound in them and, heaping external rewards on them, drives them away from internal ones . . . Consequently, holy people are more fearful of prosperity in this world than of adversity.

This ancient saying teaches us that skepticism is not native to modern science and philosophy: theology and doubt are no strangers to each other. It is also a lesson about the limits of trusting our conceptions of flourishing. Theologically, it is a reminder that the resurrection always goes through Calvary. But after the anesthetic revolution it still leaves us with the problem of limits only partially addressed by the debates surrounding Lourdes.

There is no going back to a world without our sophisticated palliatives, so the task remains of discerning what the limits of medicine. At what point do they impinge upon what John Paul II called what is “essential to the nature of man”? These questions remain unthought for over a 150 years. That does not mean that the questions about the meaning of pain and suffering are not being answered, but that they are being answered badly and for the wrong reasons, like during the opioid crisis.

What are the boundaries of humane and inhumane suffering? These are questions that only theology can answer; minimally, because nobody has taken up the questions rigorously in a comprehensive anthropological register; maximally, because this is what theology is supposed to do.

Lourdes from the Perspective of a Wheelchair

Catherine Sims Kuiper, Postdoctoral Fellow at Notre Dame’s Kaneb Center, relates what it's like to visit Lourdes as a deeply ill pilgrim. 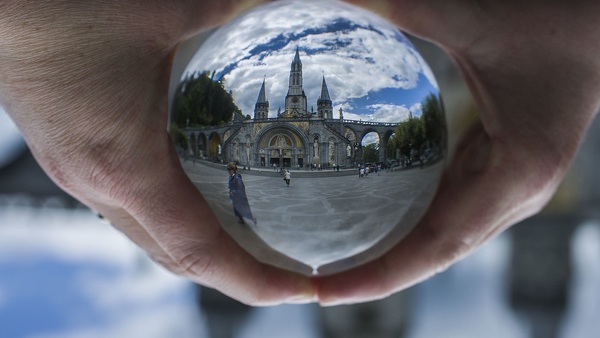