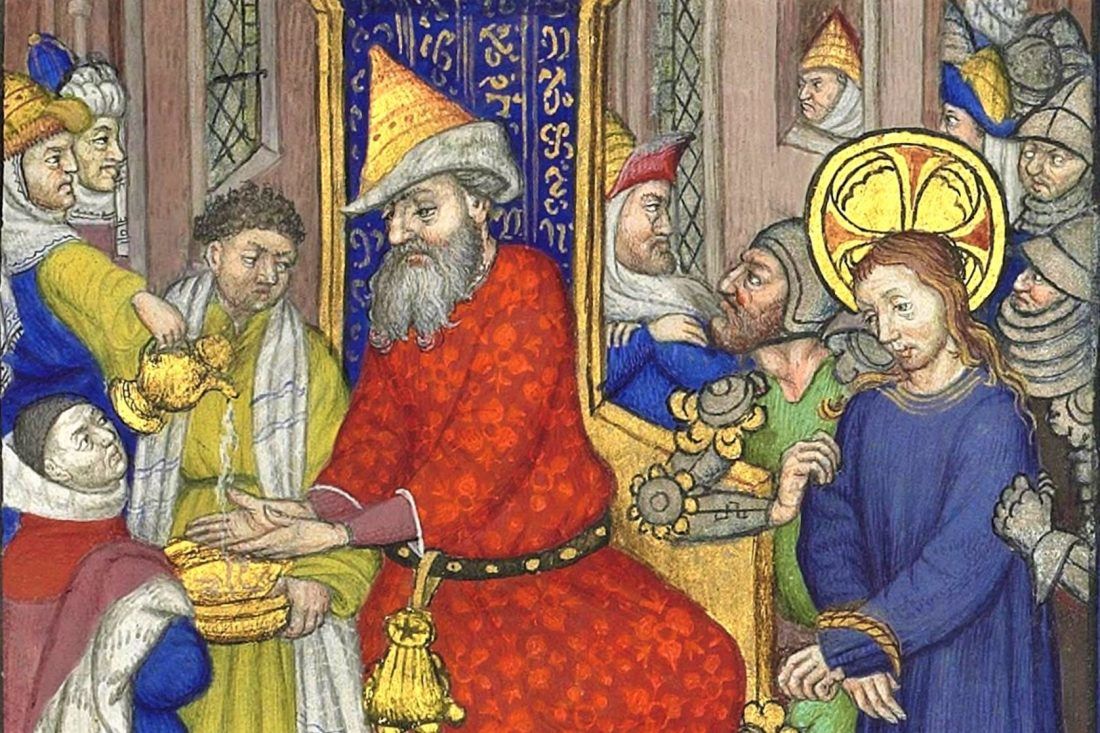 Editorial Note: Throughout this Holy Week, we will be sharing a series of poetic meditations on the Stations of the Cross by Malcom Guite. An Anglican priest-poet currently serving as Chaplain of Girton College at the University of Cambridge, Guite has published eight books of his poetry, with two more forthcoming. His collection Sounding the Seasons comprises sonnets composed for various feasts and seasons throughout the liturgical year, including this series. We are grateful for Guite’s kind permission to share these sonnets on Church Life Journal.


The sonnet is a form of poetry undoubtedly familiar to anyone who studied Shakespeare in high school English class. The Shakespearean or Elizabethan sonnet structure consists of fourteen lines broken into three quatrains and a couplet, usually written in iambic pentameter (five accented syllables per line following a weak-strong pattern of emphasis) and using the rhyme scheme abab-cdcd-efef-gg. The parameters of the sonnet form are quite stringent, and to compose a successful sonnet is a difficult task under the best of circumstances. In this series, however, Guite has imposed an additional challenge for himself by carrying over one line from one sonnet to the next, creating a beautiful dovetail effect from one Station of the Cross to the next. For example, in these first two sonnets, the line “He gives himself again with all his gifts” signifies Christ’s submission to Pilate in the first station, and our returning Christ’s gift of self with the gift of the Cross in the second. In this second station, Guite’s language poignantly recalls that of the Reproaches, prayed during the Adoration of the Holy Cross every Good Friday, and John Sanders’ musical setting of these texts provides an apt accompaniment for contemplating the mystery of Christ’s Passion and Death.


I.  Jesus is condemned to death

The very air that Pilate breathes, the voice
With which he speaks in judgment, all his powers
Of perception and discrimination, choice,
Decision, all his years, his days and hours,
His consciousness of self, his every sense,
Are given by this prisoner, freely given.
The man who stands there making no defence,
Is God. His hands are tied, His heart is open.
And he bears Pilate’s heart in his and feels
That crushing weight of wasted life. He lifts
It up in silent love. He lifts and heals.
He gives himself again with all his gifts
Into our hands. As Pilate turns away
A door swings open. This is judgment day.

II.  Jesus is given his cross

He gives himself again with all his gifts
And now we give him something in return.
He gave the earth that bears, the air that lifts,
Water to cleanse and cool, fire to burn,
And from these elements he forged the iron,
From strands of life he wove the growing wood,
He made the stones that pave the roads of Zion,
He saw it all and saw that it is good.
We took his iron to edge an axe’s blade,
We took the axe and laid it to the true,
We made a cross of all that he has made,
And laid on it the one who made us free.
Now he receives again and lifts on high
The gifts he gave and we have turned awry.