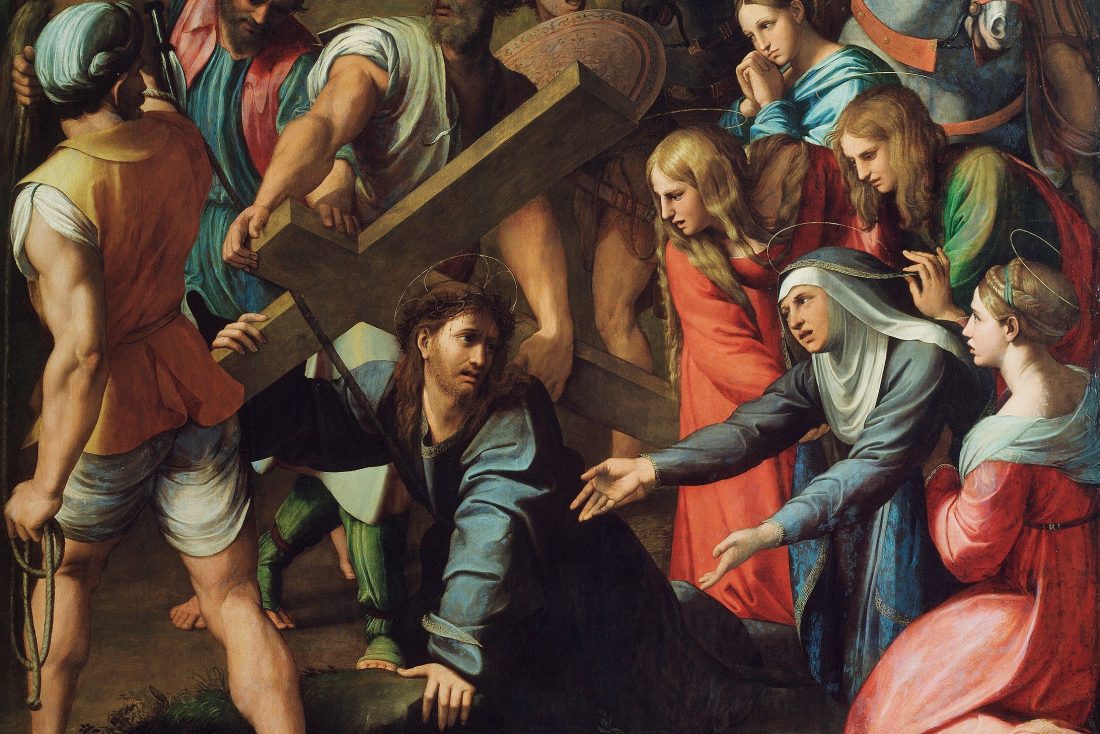 Throughout this Holy Week, we will be sharing a series of poetic meditations on the Stations of the Cross by Malcom Guite. An Anglican priest-poet currently serving as Chaplain of Girton College at the University of Cambridge, Guite has published eight books of his poetry, with two more forthcoming. His collection Sounding the Seasons comprises sonnets composed for various feasts and seasons throughout the liturgical year, including this series. We are grateful for Guite’s kind permission to share these sonnets on Church Life Journal.


Continuing along the Via Dolorosa with Malcom Guite’s sonnets on the Stations of the Cross, the vividness of the poet’s imagery comes to the fore, along with the lyrical quality of the diction, particularly the alliteration in the third station with words like flesh and flinch and flint, and in the fourth with mars and maiden making. Unlike prose, poetry bids the reader pause: at the end of each line, at each comma, we take a beat and take a breath and take a fleeting moment to contemplate the "gravity and grace" of what we are encountering. We see in our mind’s eye the bruised Christ; we behold the devastating look that passes between Mother and Son; we consider the anguished depths of love Christ has for each of us that in turn propel each one of his agonized steps on the Way of the Cross. We hear in the musical selection chosen to accompany these two Stations the voice of Mary as she contemplates her Son’s great hour, and we place ourselves, sorrowful for our sins, alongside our Sorrowful Mother as we both mourn and give thanks for this Death in all its awful glory—this Death by which our death is defeated.

He made the stones that pave the roads of Zion
And well he knows the path we make him tread;
He met the devil as a roaring lion
And still refused to turn these stones to bread,
Choosing instead, as love will always choose,
This darker path into the heart of pain.
And now he falls upon the stones that bruise
The flesh, that break and scrape the tender skin.
He and the earth he made were never closer,
Divinity and dust come face to face,
We flinch back from his via dolorosa,
He sets his face like flint and takes our place,
Staggers beneath the black weight of us all
And falls with us that he might break our fall.

This darker path into the heart of pain
Was also hers whose love enfolded him
In flesh and wove him in her womb. Again
The sword is piercing. She, who cradled him
And gentled and protected her young son,
Must stand and watch the cruelty that mars
Her maiden making. Waves of pain that stun
And sicken pass across his face and hers
As their eyes meet. Now she enfolds the world
He loves in prayer; the mothers of the disappeared
Who know her pain, all bodies bowed and curled
In desperation on this road of tears,
All the grief-stricken in their last despair,
Are folded in the mantle of her prayer.