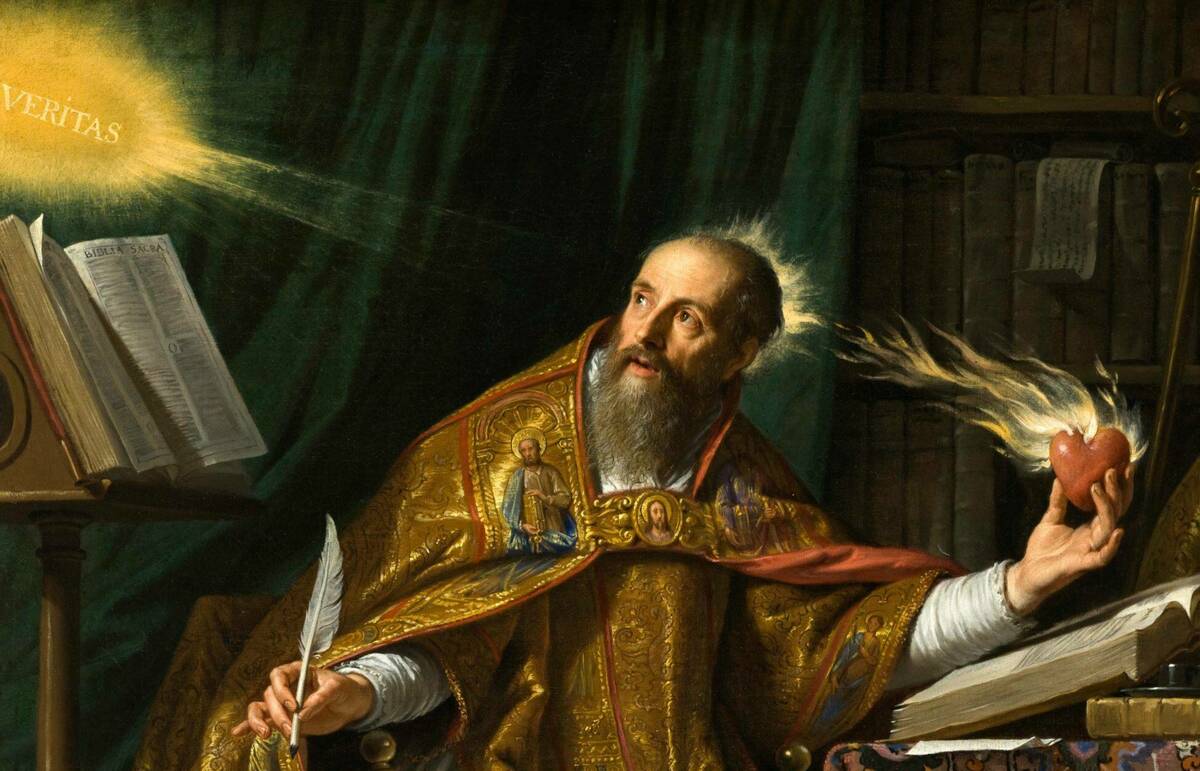 As a young adult of nineteen—just a few years older than the high school students I teach—Augustine had his first conversion on his pilgrimage towards Christianity. As Augustine recounts in his Confessions, the catalyst for his first conversion was, famously, his reading of Cicero’s Hortensius.

A pagan’s apologia for philosophy is admittedly not the most obvious source of Christian conversion. However, as Augustine makes clear in his recollection, the relationship between pagan literature and Christian revelation was obvious—but only from the perspective of a Christian. A Christian sees time as a unity, drawn together and made intelligible by the Eternal God. As all time is united in God, so too, Augustine argues, is “the entire life of an individual person, where all actions are parts of a whole, and of the total history of the sons of men [hoc in toto saeculo filiorum hominum] where all human lives are but parts.” A pagan writer is one part of the total history of the world, a history ordered by and towards God.

In Augustine’s vision of integral Christian humanism, pagan philosophy—so long as it genuinely seeks the truth, and not merely to make the weaker argument the stronger—reveals something true about God, who is Truth. Such is the nature of Augustine’s reflection on his reading of Hortensius. He writes that “the book, in truth, changed my affections, and turned my prayers to Yourself, O Lord, and made me have other hopes and desires” (Conf. 3.4.7).

Note that for Augustine, reading Hortensius did not merely spark an interest in critical thinking or classroom dialectic. Rather, the encounter filled him with compunction, for through Cicero, “worthless suddenly became every vain hope to me; and, with an incredible warmth of heart, I yearned for an immortality of wisdom, and began now to arise that I might return to You” (ibid.). Hortensius sparked in Augustine a genuine love of wisdom, philosophia, which in turn made him attuned to his innate desire for God. It transformed not merely his mind, but his will; not merely his thoughts, but his prayers.

While it took some time for Augustine to recognize Scripture as the highest source of wisdom (in the chapter following his reading of Hortensius, Augustine recounts his dismissal of Scripture as too simplistic), the compunction which pierced his heart in reading Hortensius was a wound which could be healed only by the salve of Scripture. Though separated by years, the pilgrimage towards Wisdom which began with Cicero was fulfilled by St. Paul.

Augustine’s reading of Cicero offers a model of reading in the humanities, whereby the reader is attentive to the presence of God in all literature, secular and divine. This form of reading, in which the reader seeks out and is receptive to an encounter with the Logos in the words of the page, has lectio divina as its archetype. Lectio divina, which, in Michael Casey’s O.C.S.O. definition, “is a school in which we learn Christ," develops in the reader an Incarnational imagination.

At its core, lectio divina teaches us to encounter Christ in Scripture: through reading and meditation, lectio divina teaches us to search for the truth about Christ that is hidden beneath the surface of the Scriptural text; and through prayer and contemplation, that truth then speaks to our hearts, awakening our souls to our fundamental need and desire for God. Lectio divina provides a space for true contemplation, where the whole self is open and receptive to the reality of Christ the Logos who speaks directly to each one of us.

While lectio divina is practiced in relationship to Scripture, the Incarnational imagination which it cultivates cannot help but affect the way in which the Christian encounters all of literature. Like Augustine reading Hortensius, the line that separates secular and divine literature is blurred precisely because the Incarnation reconfigures the distinction between time and eternity. This type of Incarnational reading was refined in the monasteries during the centuries following Augustine, where classical literature was read alongside the lectio divina of the Scriptures and the Church Fathers.

Monastic education inherited from the Church Fathers (including Augustine and monk-pope, St. Gregory the Great) the belief that reading Scripture and reading secular literature are engaged in the same fundamental act, albeit the former more perfectly than the latter. As Jean Leclercq observes in The Love of Learning and The Desire for God,

The medieval monks could not come into contact with classical tradition without profiting from its accumulation of wisdom and truth . . . They came upon examples of true greatness and were not afraid to find inspiration in hem, once they had transposed them—they did so spontaneously—to the plane of Christian virtue.

All that is beautiful, true, and good in humanity’s past should be put at the service of the lives of the members of the Church. To allow the pagans in this way to bring beauty into our lives and to render us service, is that not a way of giving them a means for survival in us in the light of Christ?

As in monastic education, applying the Incarnational perspective of lectio divina to the humanities allows the reader to (1) encounter the hidden Christ—the Logos, Wisdom itself—throughout literature; and (2) be awakened to the innate desire for God which is then fully satisfied through an encounter with Christ in Scripture. Just as Scripture ought to lead us to an encounter with Christ, Leclercq argues that so too does monastic education demonstrate that literature "can—in no insignificant sense—lead to God.” This “eschatological humanism,” as Leclercq calls it, allows the reader to orient literature—including those texts not divine in nature—towards their proper end: Christ.

The Church today—particularly Catholic schools—can recover this tradition of monastic education through the integration of lectio divina and the intentional development of a humanities curriculum which benefits from the fruits of lectio divina. As a literary endeavor, lectio divina is well-suited to a Catholic school environment, where the intellect is engaged not purely in the acquisition of knowledge, but in pursuit of Divine Wisdom.

Encouraging students to practice lectio divina allows them to encounter Scripture in a new mode. No longer are they simply working on the text. Rather, the text—in this case, the Word of God—works on them.

The contemplative attitude practiced in lectio divina can then be nurtured in the classroom. In his Meditations, St. Anselm encourages the Christian to “bite the honeycomb of the words that tell of [salvation], suck their savour pleasant above honey, swallow their health-giving sweetness. Think, and so bite them; understand, and so suck them; love and rejoice, and so swallow them.” So too should a teacher encourage this process of biting, or reading and meditation; savoring, or contemplation; and finally, swallowing, or integration. Opening up this meditative and contemplative space for the student involves several steps of preparation on the part of the teacher.

First, Scripture ought to be the foundation of the Catholic humanities curriculum. The most effective way for this to occur is by beginning the course with a Scriptural text—the Letter to the Romans, or the Gospel of John work especially well in the classroom. With a Scriptural foundation, all literature, which serve as moments of revelation, can be read in light of Divine Revelation itself.

Second, non-Scriptural literature ought to be read not merely as isolated great books, but, as Hortensius is for Augustine, hidden moments of Christological revelation. Integrating questions which encourage a Christological meditation on the text tills the spiritual ground and moves the soul from meditation to contemplation, from active preparation to passive reception. How does the Aeneid prefigure Christ and the Church? In what ways does Freud reveal something true about the interior conflict of the soul, a conflict resolved in St. Paul’s meditations on Christ? How does Marxist communism represent an attempt to imitate the vitality of Christian communion?

Finally, the student should be invited to contemplate the text in the manner one would contemplate Scripture in lectio divina: by putting the mind at rest and allowing the text to reveal its meaning. This can be encouraged through activities like florilegia, that great monastic literary genre, in which excerpts and phrases from literature are collected in a journal without commentary or analysis, and over time committed to memory more like a lyric from a song than a text to be studied. Through receptive contemplation, literature becomes a means by which the Holy Spirit moves the student to the love and apprehension of wisdom, thereby integrating what one reads with how one lives. For, as Augustine demonstrates, the object of literature is not merely information or even formation, but transformation.

Like Ambrose teaching Augustine, teachers who are attuned to the movement of the Holy Spirit throughout divine and secular literature can help reveal to their students the patterns of God’s grace in history, in literature, and ultimately, in their lives. Such a recovery would help the Church to elevate schools as communities of Incarnational and eschatological culture, in which the entire school community—teachers, students, and parents—become aware of the reality that all things are made for God and find their end in God.

Christopher Fisher is executive director of the Portsmouth Institute for Faith and Culture at Portsmouth Abbey and Saint Louis Abbey, and teaches in the Department of Humanities at Portsmouth Abbey School. He is the editor of A Benedictine Education, a volume of essays by John Henry Newman.

Jessica Hooten Wilson on René Girard, Augustine, and the great art of imitation. 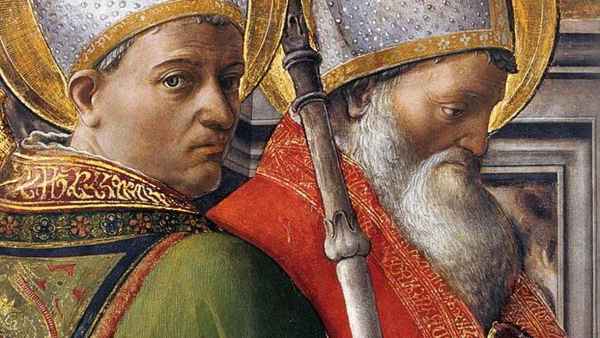