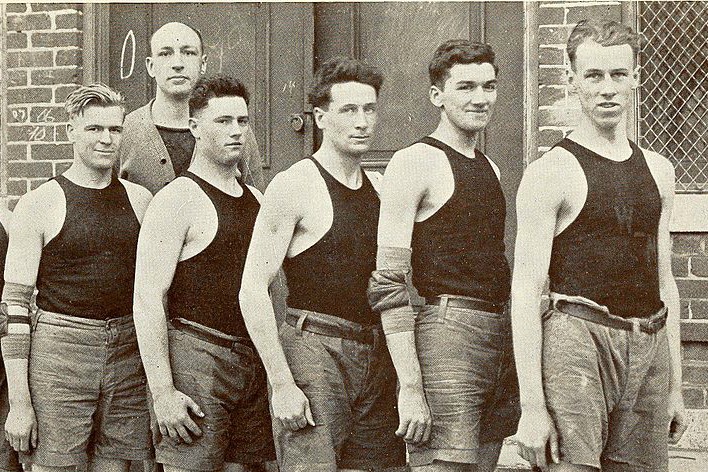 This week, in honor of the Edith Stein Conference taking place at Notre Dame, Church Life is focusing on themes related to gender and human sexuality.


In our editorial meetings leading up to this issue, we determined that something that was absent from our discussion of gender and human sexuality is the question of masculinity. Frequently, the Church hosts events about the future of women in ecclesial leadership. But because the Church ordains men alone, it is presumed that men are flourishing in the Church.

But anyone who pays attention to statistics relative to participation in the Church should notice that it is often men who are increasingly absent from the pews. A 2016 Pew Study noted that women are 13% more likely to see religion as important to their daily life. Women are also 17% more likely to pray daily and 8% more likely to attend religious services once a week.

Men are not simply absent today from the Church. They are also increasingly under-represented in higher education, a point of concern for Catholics, who see higher education as part of a complete formation of the human person. The U.S. Census Bureau reported that in 2014, among Americans of 25 to 34 years old, 37.5% of women have completed a bachelor's degree versus 29.5% of men. While certainly every women who wants to should be attending college, we should also be worried that there is this gap between college educated men and women.

Of course, we don't need statistical data to wonder about the present state of men in society. As an instructor in the college classroom, I have often noticed that my best students are consistently women.

As someone who has talked to college-aged men and women about their faith, I discover women who have sophisticated questions about their religious identity, and men who seem marginally connected to the religious tradition of their upbringing.

I often encounter men who are unable to act as adults in society. They seem frozen in a state of perpetual discernment, incapacitated to make a decision or commitment beyond what is immediately in front of them (I also encounter women like this, but many, many more men).

Although they're interested in marriage, they speak about putting it off for another five or six years. In his book Guyland, Michael Kimmel writes:

. . . many of these young men, poised between adolescence and adulthood, are more likely to feel anxious and uncertain. In college, they party hard but are soft on studying. They slip through the academic cracks, another face in a large lecture hall, getting by with little effort and less commitment. After graduation, they drift aimlessly from one dead-end job to another, spend more time online playing video games and gambling than they do on dates (and probably spend more money too), 'hook up' occasionally with a 'friend with benefits,' go out with their buddies, drink too much, and save too little. After college, they perpetuate that experience and move home or live in group apartments in major cities, with several other guys from their dorm or fraternity. They watch a lot of sports. They have grandiose visions for their futures and not a clue how to get from here to there. When they do try and articulate this amorphous uncertainty, they're likely to paper over it with a simple 'it's all good.' (Michael Kimmel, Guyland, 3)


If grace builds upon nature, then the Church is dealing with a problem relative to the nature of masculinity in late modernity. Men are not assuming the kind of maturity required of them until late in life. By then, they may already be experiencing significant problems with pornographic addictions, the wounds of sexual expectations that were never met, as well as a lack of communication and commitment to sustain a sacramental marriage or vocation to the priesthood.

So what to do? On the one hand, there are evangelization programs directed toward men. But, these often rely upon an attenuated view of masculinity. Men like sports. Men don't like to talk about their feelings. Men like conversion stories about prisoners and sports stars. In the worst case scenario, these programs may end up blaming the "feminization" of the Church for the lack of men participating in ecclesial life. They equate a "feminine" liturgy with a bad one, revealing a hidden misogyny that needs dealt with.

On the other hand, there is an equally problematic trend that tends to view masculinity itself as the problem. Wandering around Notre Dame's campus, I often encounter posters speaking against the perils of hypermasculinity. Hypermasculinity is a term that refers to an exaggerated sense of certain characteristics that are found to be stereotypically male. These include sexual desire, a love of danger and aggression, and a propensity toward violence. These dimensions of male identity are understood as nothing more than social constructs, which can be erased by asking a man (in essence) to become "less male."

While there is something true about this approach (it is certainly not a good thing to fight or to be sexually aggressive at a dorm party), hypermasculinity tends to treat gender as exclusively a social construct along a continuum. Is there nothing about male identity that is at the level of nature? Does not biology determine some aspect of our existence, our experience of the world itself?

Perhaps, these "stereotypical" dimensions of masculinity actually contain some truth. Men could be more violent, more sexually aggressive than women.

It is Camille Paglia, in particular, who notes this problem with "educating" men out of this desire for power (particularly in sexuality). For men's sexuality is always, in some sense, hypermasculine. She writes in her Sexual Personae:

Women's eroticism is defused throughout her body. Her desire for foreplay remains a notorious area of miscommunication between the sexes. Man's genital concentration is a reduction but also an intensification. He is a victim of unruly ups and downs. Male sexuality is inherently manic-depressive. Estrogen tranquilizes, but androgen agitates. Men are in a constant state of sexual anxiety, living on the pins and needles of their hormones. In sex as in life they are driven beyond—beyond the self, beyond the body . . . Men know they are sexual exiles. They wander the earth seeking satisfaction, craving and despising, never content. There is nothing in that anguished motion for women to envy. (19)


For the Church, this account of sexuality is insufficient. Of course, it is not enough to accept men as sexual vagabonds, who are fundamentally interested in power and violence. We think about the human person as fallen but as capable of more.

At the same time, we cannot pretend that masculinity and femininity do not exist (and that these biological realities have nothing to do with the way that we abide in the world). Nor for that matter can we pretend that our fallen identities can be reformed simply through better education.

This ignoring of the existence of distinctions between men and women is a problem for the Church. Over the last fifty years, we have attempted to adopt a one-size-fits-all pastoral strategy for working with men and women that has fundamentally failed.

For example, I taught a group of seventh graders once in a religious education program in Boston. It was in a co-ed classroom with about equal numbers. The men were exceedingly violent, constantly attempting to throw things out second story windows (including each other). It was like watching some bizarre mating ritual, where men for the first time discovered their sexuality, and thought that the proper way to flirt was to show women how aggressive they could be. It was a disaster (but at least no one fell out of the window).

The next year, I asked for a class only consisting of men. The tenor of the classroom was transformed. I invited two high school men to serve as assistants for the class, sharing their understanding of Catholic faith with their younger peers. I taught these men about what it means to be a husband, a father (something I was still thinking about myself). I taught them to pray, I addressed some of their tendencies to respond to violence with violence. I taught them the self-giving love of the Cross, which is transformation of our identities, which heals our natures.

It was the best experience I've had in a religious education setting. We did not create a space where women were absent because we sought to exclude them. Rather, it was the particularity of their identities that I sought to teach at the time.

This Platonic approach to gender confuses common human virtues with what it means to relate to one another as man and woman. This is a faulty and radically deficient view of complementarity, often employed by those who popularize John Paul II's Theology of the Body but don't quite have the philosophical bona fides to understand it.

Rather, we must embrace an integral complementarity that sees difference but at the same time a common humanity. We form men and women in this common humanity (their identity as created in the image and likeness of God), aware of the particularities of the human self that necessitate distinct approaches to formation.

As Sr. Prudence Allen notes in her third and final volume of The Concept of Woman:

What would this formation into authentic masculinity consist of? At Notre Dame, for example, men are often formed into a fallen form of masculinity related to violence, alcohol consumption, a lack of commitment, and sexual exploitation. This is partially because Notre Dame fails at a fundamental level to remind these men of their potential future as a husband and as a father.

A formation into masculinity within the dorm wouldn't hold pig roasts and teach men to smoke cigars (though it may involve this, because both could lead to more interesting conversations than your average retreat's small group . . . and many women would rightfully agree with this).

Instead, it would think concretely about it means to be a husband. It would deal with pornography as a way of denaturing authentic human sexuality, especially among men. It would take up a discussion of the violence of male sexuality, which is fallen. It would seek to hold up a standard of what authentic alcohol consumption looks like. It would form men into the spiritual practices that will sustain them in their work as husband and as a father. It will take seriously the intellectual vocation of being a man. It will invite them into practices that foster a culture of dating, where men learn to teach women with respect, not as objects to be seized upon. It would actually consider the ultimate vocation of masculinity as fulfilled not in career but in the self-gift of fatherhood or in a celibate vocation.

None of this is exclusive, per se, to the men's dorm. Women would also need to be formed in similar ways. Such a formation, necessarily, must avoid a Platonic view of complementarity where women represent one series of virtues, while men represent another.

But as long as we see masculinity as the source of the problem, we will continue to discover that the pastoral and educational ministry of the Church will not (in the end) function with men.

The Church needs to form men to express their identity precisely as men redeemed in Christ. Rather than to see salvation as a reduction of masculinity for the sake of a genderless society where we end up denying an integral dimension of what it means to be human.