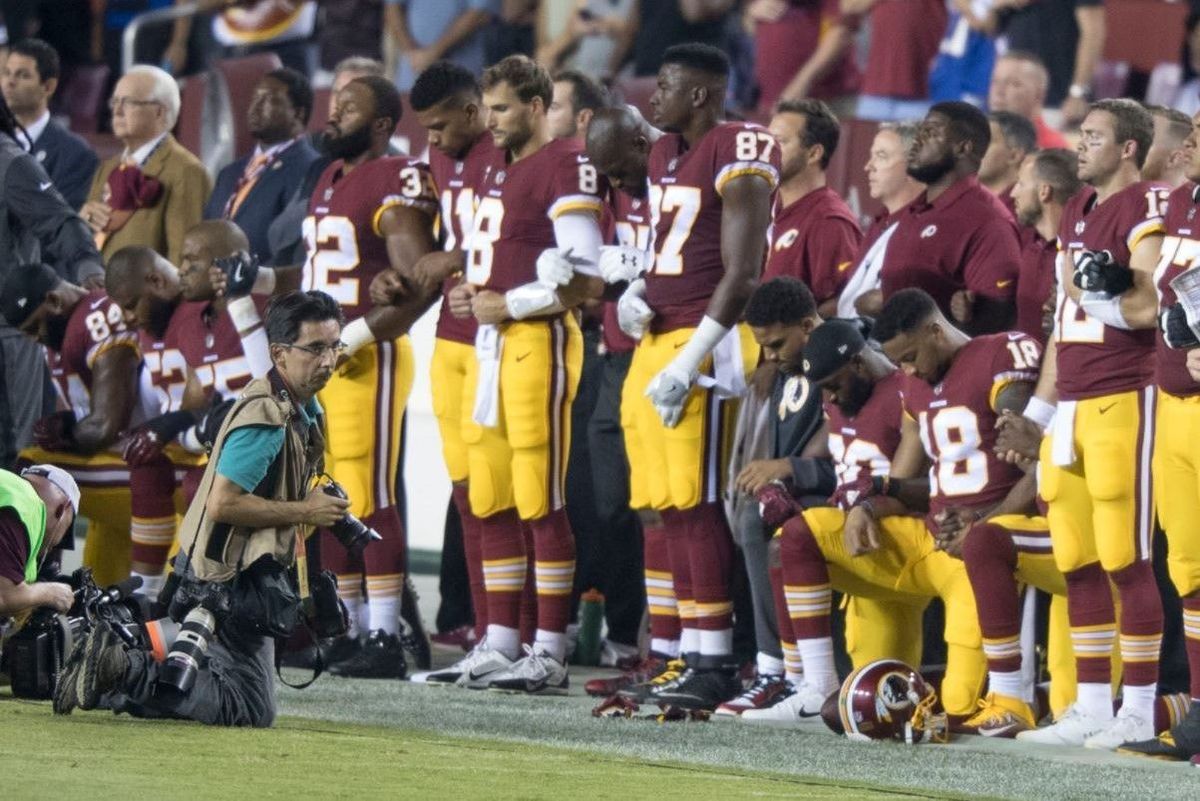 This essay should be understood as a preliminary[1] exegesis, reading the recent events surrounding the phenomenon of “taking a knee” at football games as texts, mining them for meaning. Why has the response of many Americans been so negative? And how might we, as liturgically formed Christians, apply a kind of hospitable imagination to our reading as we seek to live out a consistent and holistic ethic of life?

They’re not only free to earn millions of dollars every year, but they're also free from the worry of being shot in the head for taking the knee like they would be if they were in North Korea.
—Commentator on Fox Cable News

You think black Americans are free from the worry of being shot by agents of the state? That's the whole thing that they’re protesting in the first place.
—Trevor Noah, from the Daily Show

The renowned theorist René Girard posits an overarching theory of human culture that begins with what he calls mimetic desire. Human desires “are not innate or autonomous,” but instead learned and copied.[2] These desires are also triangular since a relationship forms between the (1) subject, the (2) other who desires, and the (3) object that is now desired by both. Triangulation leads to a kind of enclosed, all-encompassing rivalry. The more people desire something, the harder it is to obtain it. And the more rare the object, the more others want it. Girard says this rivalry leads to violence, which leads to the crumbling of social groups.

Enter the scapegoat, the second half of his basic theory. Behind the founding of every society there is at least one real human scapegoat. The scapegoat, often an outsider of some kind, is sacrificed to satiate the need for social violence and likely recast in the culture’s myths as hero. The communal violence, the sacrifice of a victim, becomes the founding event for society.

After developing his theory Girard returned to his own Christian heritage when he discovered that the Judeo-Christian tradition critiqued this repeating cycle of substitutiary violence by unveiling it. The Hebrew and Christian Bibles no longer hid society’s violent origins and founding murder, but instead laid it bare, making the victims the true subjects of the narrative: first, in the history of the Israelites, the Lord God’s chosen people, and then in Jesus of Nazareth. By upending the constant human story of desire, violence, and sacrifice these traditions forever made it more difficult—though certainly not impossible—for the cycle to go unnoticed. Scholars from many fields mine Girard’s theory, finding ways in which it illuminates many nuanced aspects of human cultures.

Girard might offer that the thinly-veiled violence of football, the great American war game, satiates a deeply rooted violent impulse in the same ways that Roman gladiators did for ancient Rome. Taking at face value that human beings are attracted to violence, our current culture’s love of American football makes it reasonable to assume that football players are our contemporary gladiators. Even our stadiums and the spectacle of football games evoke an age-old memory of times past.

I propose that these secular rituals, and others like them, attempt to feed our need for violence and sacrifice, playing an essential role in the social economy that holds these American state together. Football players become gladiators and mythic heroes. Their role is not unlike that of a priest (and a scapegoat), standing between the gods and the people, offering up themselves through sport, paying homage to the overwhelming powers of oblivion. All of this is for the edification of the citizenry.

What happens if those athlete-officiants insert, into this highly ritualized exercise in substitutionary violence and socially sanctioned mimetic rivalry, their own set of symbolic actions that draw attention to a major societal problem that in the moment seems irrelevant to the liturgy of the American civic religion? Anger, even rage.

Almost 70% of the all NFL players are black men. They are an elite, sometimes very wealthy, group of black professionals with high profile jobs. Many would agree that there is a chronic and deadly problem: America continues to be particularly inhospitable to black human life.

The irony that marks their place in society is both tragic and comic. Black professional football players, some of the largest and most physically imposing men in the nation, have (more than most) a visceral sense of how their embodiment carries a kind of mark. At the same time they can be demonized in the collective American imagination. The powerful, deft, beautiful, imposing, and sometimes adored bodies of black athletes evoke memory of their own ancestors whose bodies were deemed physiologically predestined, legislatively mandated, and theologically ordained for ontological servitude. Enslaved Africans were one of this nation’s prime objects of scapegoating violence. But according to Girard, scapegoats are often ambivalent symbols simultaneously demonic and salvific. Demonization permits violence and deification. It both veils and absolves. The scapegoat is both seen as the source of disorder and his or her murder is what finally brings the community together.

These men, who one could say are in the business of selling their bodies[3] (and their athletic expertise is so reminiscent of combat) for the entertainment of the masses, are well aware that the scapegoating of black bodies is now more visible in American society than it ever has been—even though the demonization of blackness has been with us since before the founding of the nation. According to our culture, black bodies are worth only what they can do for others.

When I Fall On My Knees

One professional athlete, Colin Kaepernick, sought to find a way to communicate frustration with his country about apparent police immunity when exacting deadly violence on the bodies of countless African Americans. He chose to sit when common ritual practice calls for standing. He caused an uproar. Nate Boyer, a white male army veteran, was at first offended because of his own devotion to the flag and anthem as symbols of military sacrifice. After becoming a genuine dialogue partner with Kaepernick, Boyer suggested that instead of sitting he might consider kneeling (see video below). The reaction has been fierce and athletes who followed suit have been accused of being ungrateful for their high paying jobs and the civic freedoms they enjoy. Many commentators took offense to kneeling as causing division and maligning the national tradition of reverencing the American flag and what it represents.

But since when has kneeling ever been an irreverent posture? Kneeling, whether this is fully intended or not, always exposes the kneeler (and the viewer) to something reverent, significant, and sacred. It is always an act of humility.

Kneeling disposes Christians to memory. It invokes the Kyrie, eleison that begins our liturgies. Even before we receive the word of God in proclamation and preaching, we call out to the Lord, he who is the one-true-sacrifice, for mercy and pardon. Kneeling does not negate the memorials we perform for dead soldiers who heroically chose to risk life and limb to ensure freedom. The kneeling of black athletes and their allies can remind us of their bodily association with Americans who lose their lives when we play out familiar scripts that convince everyone, sometimes even young black women and men themselves, that they are threats to civil society.

Trayvon Martin, Tamir Rice, Andy Lopez, and Aiyana Stanley-Jones are but a few names. Our tradition asks that we consider that their deaths might be caught up in the cruciform, salvific death of the Lord Jesus.

The civic rituals that punctuate our common life also reinforce American identity.  They help to make us American. Fourth of July parades, grade school assemblies, state funerals, presidential inaugurations, and perhaps more ubiquitous than any other, high school, college, and professional sporting events. These rituals often include the raising of the flag, the singing of the national anthem, and the presence of a military color guard. They provide for us a common experience on which to base our common identity. They reinforce the values of individual achievement, equality, toughness, and tenacity. They reinforce narratives about the greatness of competition and free enterprise and encourage young people to dream big and achieve bigger. These civic rituals, especially in a society that claims separation between church and state, play a virtually religious role in their capacity to shape the systems of meaning and value that make Americans American.

A hospitable imagination would be open to renewing those rituals that form and reinforce our collective identity. Human lives depend on our capacity to imagine our world as genuinely a place where black lives matter. Not because they matter more than others, but because they have historically been and continue to be marginalized with attitudes and actions that range from indifference to active hostility. The gospel of Jesus never stops directing us to return to those who live at the margins and join them. Jesus arrests the cycle of mimetic rivalry and unveils the scapegoats.

What if at every national game we not only remembered fallen soldiers, but paused to recognize the ways in which we, the American people, have failed to live up to our own values? What if we recast the substitutionary violence that football enacts as symbolic action that builds in us greater perseverance to become a more perfect union? What if kneeling during the anthem became an opportunity for a collective examination of conscience that attempted recognize our collective complicity in social violence and scapegoating? What if when celebrating the liturgies of football, instead of ending with desperate “Hail, Mary,” we began with an honest “Lord, have mercy”?

[1] It is preliminary because the topic and the moment is so rich that it cannot be sufficiently covered in one article.

[3] The ethical implications of this assertion need to be explored, but are beyond the direct scope of this essay. At this time I simply wish to evoke in the reader a palatable connection between body focused nature of college and professional sports and the memory of slavery.