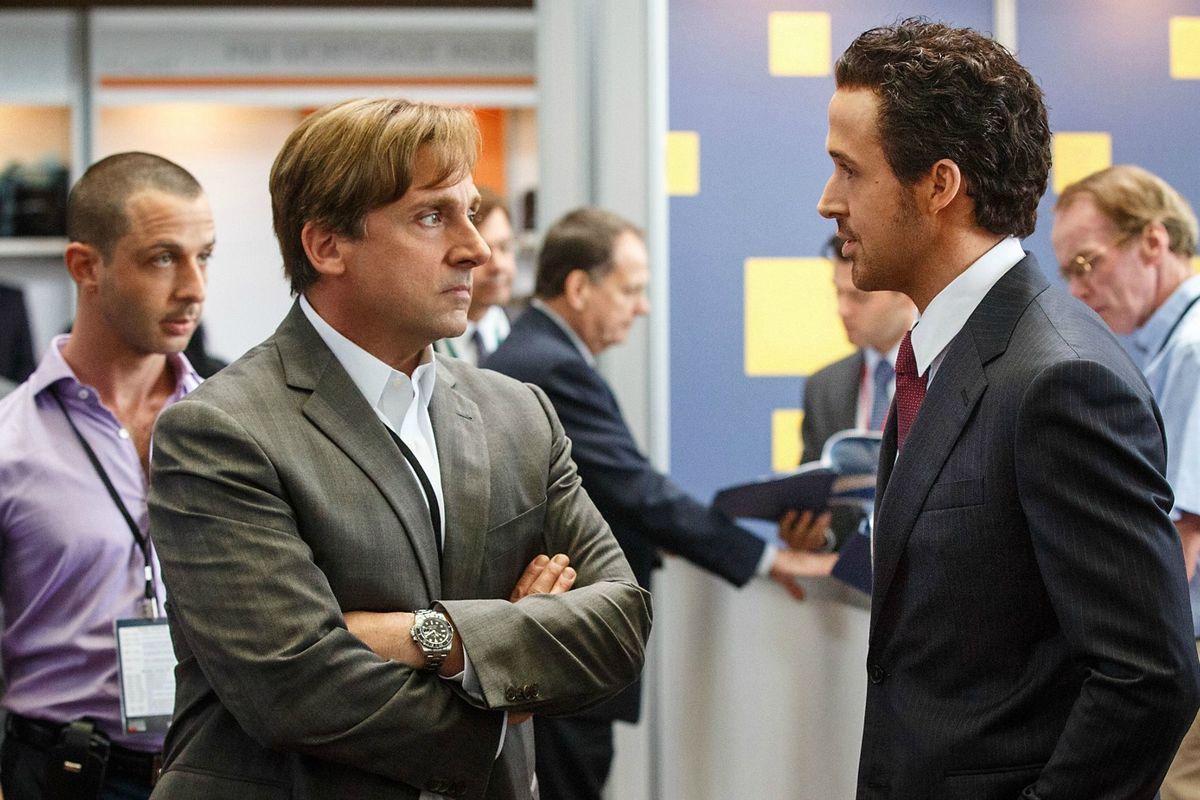 Editors’ Note: In anticipation of the 88th Academy Awards on February 28,
we present a series exploring the philosophical and theological elements in each of the eight films nominated for Best Picture. This post contains no spoilers . . . because everyone pretty much knows the story on this one.

If you found the American economic collapse of 2007–2008 overwhelmingly convoluted and complex, you may not be initially drawn to The Big Short. I invite you to take another look at this brilliant film on the crisis, which will both entertain you with its wit and drama, and bring things into sharp focus. Phrases like “credit default swap” and “collateralized debt obligations” and “subprime loans” may still seem a bit hazy by the end of the film, but you will be crystal clear on the societal and personal sins committed at every economic level that caused the implosion, and you will be sickened by the gross apathy and greed that seemed to be taken for granted among leaders of the financial world. As the credits roll, you will shake your head in disbelief that those in power could knowingly allow something of this magnitude to occur right under their noses in America, and that, according to the final commentary flashing across the screen, it is occurring again. And then you’ll realize that this movie tells an age-old tale that was first told in a garden long, long ago, and that is retold in every generation, in every land, with different characters and disguises. You’ll also laugh a lot and wish you could live on an orchard with Brad Pitt.

This star-studded semi-documentary (yet most certainly comedy-drama) is taken from the non-fiction book of the same title by Michael Lewis. Lewis also authored Moneyball, a similar work investigating the big money behind baseball that was also made into a highly acclaimed Best Picture nominee (Brad Pitt produced and starred in both). Like Moneyball, The Big Short is fast-paced and smart, almost too smart if you aren’t paying close attention to the heady economic jargon being thrown around by the many insider Wall Street players. Thankfully, the script is light on its feet and intended for a lay audience: there are many zoom-out moments in which a comedic celebrity type uses humorous metaphors to explain an opaque financial term from settings like a fancy restaurant, a card table, or even a bubble bath. Trust me, if I can get it, you can get it.

The story opens in 2005 with eccentric ex-neuro surgeon now hedge fund manager Michael Burry (Christian Bale) discovering some massive fault lines in the bedrock of the U.S. economy that are just a few years from a major, destructive earthquake. He is certain that the numbers all point to a gross failure in the U.S. housing market in the second quarter of 2007, due to highly unstable mortgages being packaged and sold by greedy lenders and banks to unfit buyers by the thousands. He figures out a way to essentially bet against the housing market (or “short” the banks). Everyone thinks he’s crazy, but he forges ahead with over a billion dollars of his investors’ money, confident in his calculations. Oh, and he doesn’t wear shoes to work and plays really really loud rock music in his office. He’s . . . different.

Several other outliers connected to Wall Street catch wind of Burry’s outlandish scheme, mostly by accident, and they realize that he may be right. Trader Jared Vennet (Ryan Gosling) teams up with hedge fund manager Mark Baum (Steve Carrell) to similarly capitalize—“the banks got greedy and we can profit from their stupidity”—and they realize that others are perpetuating the fraud by a string of increasingly large bets on the faulty loans, making collapse inevitable. Baum is essentially a John the Baptist figure, crying out in the wilderness of Wall Street (and Vegas) against the depravity of the situation to anyone who will listen, but he, too, is branded as crazy. I’m not saying Burry and Baum are saints, but there is something remarkably Old Testament about these ‘prophets’ who know that the entire nation is headed toward disaster and cannot get the world to wake up to it. Or rather, as Baum reflects after the crash: “They knew, but they just didn’t care.”

Then there’s Ben Rickert (Brad Pitt), the reclusive ex-Wall Street tycoon who agrees to get some of his young, eager prodigies a slice of the economic-collapse-pie, though he himself has dissociated from banking and finds the conniving greed deplorable. Rickert acts as something of Tiresias figure—removed from the world of money lending and acquisition, yet offering some of the film’s most poignant reflections on the moral impact the corrupt system has on ordinary people. “Every one percent unemployment goes up, 40,000 people die . . . did you know that?” he questions his dancing mentees who make millions from the crisis. No, they didn’t, and they stop celebrating. The rest of the movie has a somber shadow cast over the actual demise of the economy, as it becomes clearer and clearer that nobody wins when so many have sold their souls for money.

The Big Short is an image of Sodom and Gomorrah present at every level of the American economy, but also in the hearts of each character. The prophets who cry out against the social sin of this despicable crisis are mocked and ostracized, yet they too wrestle with their own greed and complicity. There is little redemption, yet in the end, it is difficult to cast blame. A scene early on in Baum’s investigation reveals a Latino father and husband being preyed upon: by the corrupt landlord who gave his dog’s name on the mortgage; by the young, slick banker not verifying his credit line; by the big bank buying his mortgages and packaging them. The list goes on and on, up to the top of the system, where it is clear that the government, too, is complicit in allowing the corruption and in bailing out the wealthy banks at the taxpayers’ expense. Nearly every character in this film must examine his own heart and admit that he too is greedy and blame casting. “You know what the saddest thing is?” asks Baum. “In two years they’ll be blaming immigrants and poor people.”

Best Supporting Actor nominee Christian Bale leaves us with our ears ringing at the conclusion of the film. As Michael Burry, his striking honesty bookends the madness with calm objectivity, and now, simply put, he experiences his own conversion: “This business kills the part of life that is essential, the part that has nothing to do with business.”