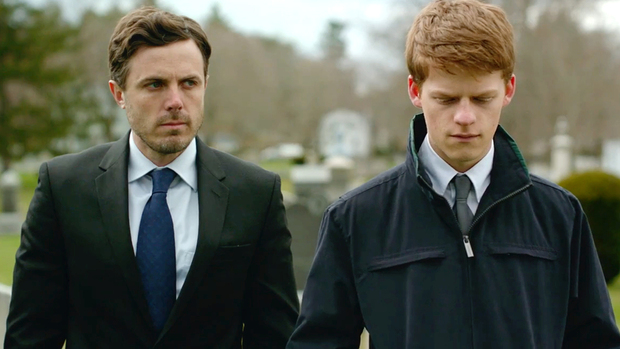 Editors’ Note: In anticipation of the 89th Academy Awards on February 26, we present a series exploring the philosophical and theological elements in each of the nine films nominated for Best Picture. Caveat: this review contains spoilers.

When life is defined by the worst mistake you’ve ever made, how do you go on living?

Writer-director Kenneth Lonergan poses this heart-wrenching question and several others like it in Manchester By the Sea, the story of Lee Chandler (Casey Affleck), an isolated janitor living in Boston who must return to his hometown after his beloved brother Joe (Kyle Chandler) passes away unexpectedly, and, even more unexpectedly, names Lee the legal guardian of sixteen-year-old Patrick (Lucas Hedges), Joe’s only son and Lee’s only nephew. When Lee learns that Joe has not only named him Patrick’s guardian but has also provided funds for him to return to Manchester permanently, he recoils, making every attempt to find another way to provide for his nephew’s care. At first, this seems like the reaction of a selfish, irresponsible man who doesn’t want to be saddled with the burden of an unexpected, unasked-for dependent; however, it soon becomes clear that Lee’s crippling reluctance to move home stems not from selfishness, but from the inability to overcome the demons from his former life there that continue to haunt him. As he is forced to confront his tragic past, Lee—and we ourselves—are brought face to face with difficult questions of frailty and forgiveness, despair and hope.

In many ways, this film offers a kind of inversion on the parable of the Good Samaritan: Lee is utterly broken by his mistake. He lies on the side of the road, alone and isolated, bleeding internally from a broken heart to the point of death. As time passes by, so too do Lee’s family members and friends; however, unlike the priest and the Levite of the parable who ignore the dying man, those closest to Lee reach out to him, offering the possibility of mercy and reconciliation—the chance to come home and be made whole, to become once again a part of the family and the Manchester community.

This mercy begins with Joe, whose last act of love for Lee is to name him as Patrick’s guardian without first asking his brother’s permission. Joe knows that Lee would never agree to such an arrangement because it would mean coming back to Manchester and confronting the past. Joe realizes that Lee has come to see himself as beyond the pale, as unworthy of forgiveness and being welcomed back by those whom his actions have hurt most. As Lee explains to Joe’s estate lawyer, he sees himself as nothing more than a “back-up,” a placeholder ultimately incapable of fulfilling the role of Patrick’s father in any real sense. And yet, Joe’s actions indicate his hope that, out of his own death, a new life for his brother will be possible.

The mercy continues with Lee’s ex-wife Randi (Michele Williams), whose own heart has also been utterly broken by Lee’s actions, but who has somehow managed to arrive at a point where she is able to offer him forgiveness for what he has done. In one of the film’s most powerful scenes, Randi tells Lee through tears that she loves him, and that she’s sorry for the horrible things she said to him in the aftermath of the tragedy that ruined their life as a married couple. This moment has the capacity to be the turning point of the film, when love wholly unmerited and freely offered might save this poor man lying half-dead by the side of the road, but in his despair, Lee is unable to receive Randi’s offer of love and forgiveness, as he tells her through tears that “there’s nothing there”—there’s nothing there that can be forgiven, that can receive forgiveness; all is lost.

Even after Lee’s tragic self-assessment that he is beyond saving, mercy is offered him one last time, as Patty pleads with his uncle to stay in Manchester. He acknowledges the desolation that continues to plague Lee, but expresses hope that Lee will one day be able to emerge from the darkness of his past, if only to the extent that it would allow him to stay in Manchester and begin the arduous, painful, but ultimately redemptive process of rebuilding the life he lost. It’s clear that, despite everything, Patrick loves his uncle, and more importantly, Lee loves his nephew and wants desperately to be the man Patrick is begging him to be, but in the end, Lee’s past proves too much for him, and he tells Patty, “I can’t do it. I can’t beat it. I can’t beat it.”

In the end, Lee relinquishes his guardianship over Patrick and transfers it to a close family friend who will be able to care for his nephew in the ways Lee feels he cannot, leaving the viewer to wonder whether Lee’s decision could actually be an act of mercy itself. Lee despairs of the possibility of overcoming his demons, but his love for Patrick prompts him to ensure that Joe’s death will not become the tragedy that ruins his nephew’s life in the same way that Lee's personal tragedy ruined his own. Inasmuch as he is capable, Lee does what he can to preserve Patrick’s life in the wake of Joe’s death. In so doing, he demonstrates that even the man lying half-dead on the side of the road can still offer love and mercy to others, which leaves viewer with the hope that, one day, Lee will be able to receive from others what he has offered to them out of his brokenness.

As devastating as its story is, this is a stunning film: Casey Affleck, Lucas Hedges, and Michele Williams all turn in remarkable, vulnerable performances of the caliber that make you forget that these people are in fact actors and that these events aren’t actually taking place. But the very things that make this such a stunning film are also what make it so difficult to watch: its unflinching veracity and heart-breaking authenticity—its stubborn realness—these are stark reminders that there are real-life people in the world like Lee Chandler who have made real-life mistakes with real-life consequences, and who perhaps find themselves unable to receive the forgiveness and love being offered them by others and by God because they cannot even allow for the possibility of extending it to themselves. The world is filled with deeply wounded souls like Lee, and the hope of the Christian message—that no one is beyond the reach of God’s mercy—can and often does fall on ears not ready to receive it. Yet hope is a stubborn mystery as well, and as long as the Christian refuses to give up on the brother or sister who desperately gropes for a way out of their darkness, as long as the gentle offer of mercy is continuously extended, there is always hope that God’s grace will pierce the hardened shell of despair and flood the darkened heart with the light of love.