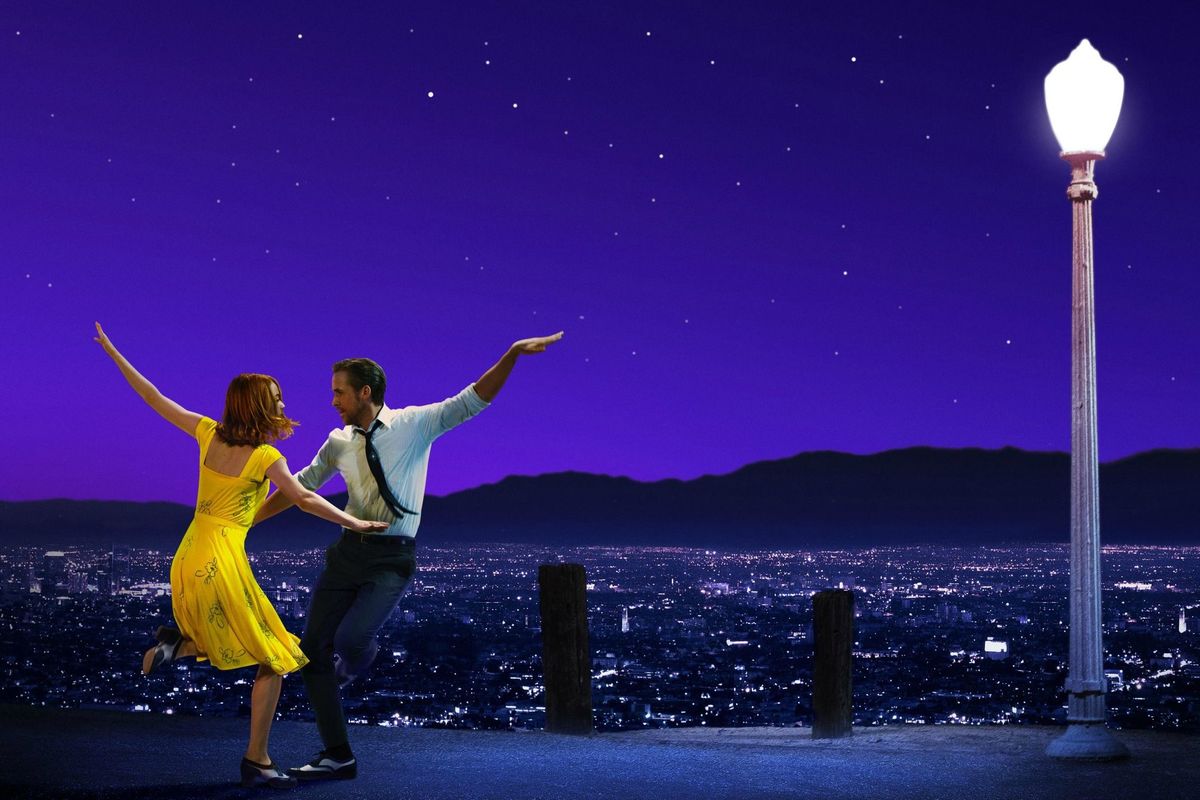 I grew up on movie musicals. The Wizard of Oz. Singin’ in the Rain. The Sound of Music. The Music Man. Some of my earliest memories are of watching these iconic films and singing along. As I grew up and started performing in musicals myself, I discovered other greats like An American in Paris and West Side Story, and more recently, I’ve reveled in modern movie musicals like Newsies and Once and Enchanted as well as film adaptations of Broadway shows like Chicago and Into the Woods. So when I heard about La La Land, I was instantly intrigued. The buzz lauded it as a glorious throwback to the glittering extravaganzas filmed in Technicolor and Cinemascope, as writer-director Damien Chazelle’s effort to create an homage, really a valentine, to the Golden Age of the movie musical. And visually, he succeeds, literally with flying colors—the gorgeously saturated primary palette and fabulously retro costumes create a look of whimsical nostalgia, as the swelling orchestral score seeks to sweep us off our feet and carry us to a world where people dance and sing without any trace of irony or self-consciousness.

There’s just one big difference between La La Land and the Golden Age musicals. The classics that La La Land desires so strongly (and rightly) to emulate featured once-in-a-generation stars like Judy Garland and Gene Kelly and Julie Andrews and, of course, the late great Debbie Reynolds. These ridiculously talented men and women were true triple threats who spent years honing their craft as singers and dancers and actors. Thanks in no small part to the dissolution of the studio system that cultivated the aforementioned stars, La La Land and its ilk fall into another category of movie musical. Instead of the song-and-dance veterans, modern musicals often feature leading men and ladies who learned to sing or dance in an intense period of weeks or months in preparation for their role (see Renée Zellweger in 2002’s Chicago, Russell Crowe in 2012’s Les Misèrables, and Johnny Depp in 2007’s Sweeney Todd and 2014’s Into the Woods). Trying to perform like this is kind of like cramming for an exam. You might know the material, you might even know it really really well, but only rarely do you ever really embody it.* So watching Emma Stone and Ryan Gosling step-ball-change their way through La La Land feels a little bit like watching high school students try to emulate the greats of the Golden Age. They’re cute, they even have their moments of brilliance (Ryan Gosling’s piano playing was definitely impressive), but they just don’t carry us away.

Part of this has to do with a slow-moving story and underdeveloped caricatures characters—Sebastian is a typical curmudgeonly artiste who feels compelled to mansplain to Mia why she’s so wrong about jazz and who never quite supports her career to the same degree that she supports his. Meanwhile, Mia is the bland-ish cliché—an aspiring actress whose love of old movies causes her to fall for Sebastian’s vintage romantic charm. Their meet cute is something we’ve seen before: boy meets girl, boy and girl dislike each other, boy and girl meet again and something shifts and they realize, oh, I like you. Even the central plot is familiar—watching aspiring artists trying to balance achieving their dreams and sustaining their relationship may remind viewers of the Judy Garland classic A Star is Born (1954) or Jason Robert Brown’s more recent The Last 5 Years (2014).

Such familiarity isn’t necessarily a problem, though; rather, it's nostalgic—everything in this film originates from a desire to create a link to the past, a desire which has resonated with audience in a thoroughly positive way. People love that this film is a throwback to the glory days. But what we’re missing with La La Land is the technical brilliance of two top-notch performers. As much as I want to love Ryan Gosling and Emma Stone, and as clear as it is that they’ve poured themselves into these roles, Gene Kelly and Debbie Reynolds they just ain’t.

Because here’s what La La Land does offer: it offers viewers a world in which it’s okay to be romantic, even unabashedly sentimental, and to remember with fondness things that were good and joyous and beautiful. Let’s face it, there have been an awful lot of post-apocalyptic themes running through movies and television lately, and with the surreality of the present political climate, people seem to be looking for sincerity, earnestness, goodness, even magic. This is nothing new. The movie musicals of the past were forged in the crucible of two world wars and their aftermath. Watching Dorothy Gale follow the yellow brick road or swooning over Don Lockwood crooning to Kathy Selden before the two dance on air together, movie-goers in the 1940s and 1950s could be reminded that there was still good in the world, there were still reasons to hope and to celebrate, there was still a chance of falling in love. It seems we need to be reminded of these things today, too.

In the end, the real gift of La La Land is that it embodies Mia’s words to Sebastian: “People love what other people are passionate about. You remind people of what they’ve forgotten.” In this case, it’s Damien Chazelle’s infectious passion for the great movie musicals of the past that either reminds us viewers of the classics we may have loved and forgotten about, or it introduces those classics to us for the first time.

So if, like me, you like the idea of watching Ryan Gosling and Emma Stone twirl across a screen glittering with stars, say hello to Fred Astaire and Ginger Rogers. Or Vera Ellen and Danny Kaye. Or Gene Kelly and Leslie Caron. If you long for a world in which it’s perfectly acceptable—even normal—to serenade your beloved with an unabashedly romantic ballad, meet Julie Andrews and Christopher Plummer. Or Robert Preston and Shirley Jones. And if you just want a good old-fashioned chorus number where a seemingly disparate group of people randomly comes together and everyone inexplicably knows every step, just seize the day—take a walk through Central Park or attend a local barn dance, but whatever you do, just get cool, boy (or girl), and enjoy La La Land for the invitation that it is: an invitation to (re)discover the glories of the Golden Age of the movie musical and an invitation to remember the truly good things in life—the things that are worth singing and dancing about.

* Even Debbie Reynolds had to have her newly-learned tap dancing dubbed over by Gene Kelly in post-production for Singin’ in the Rain!