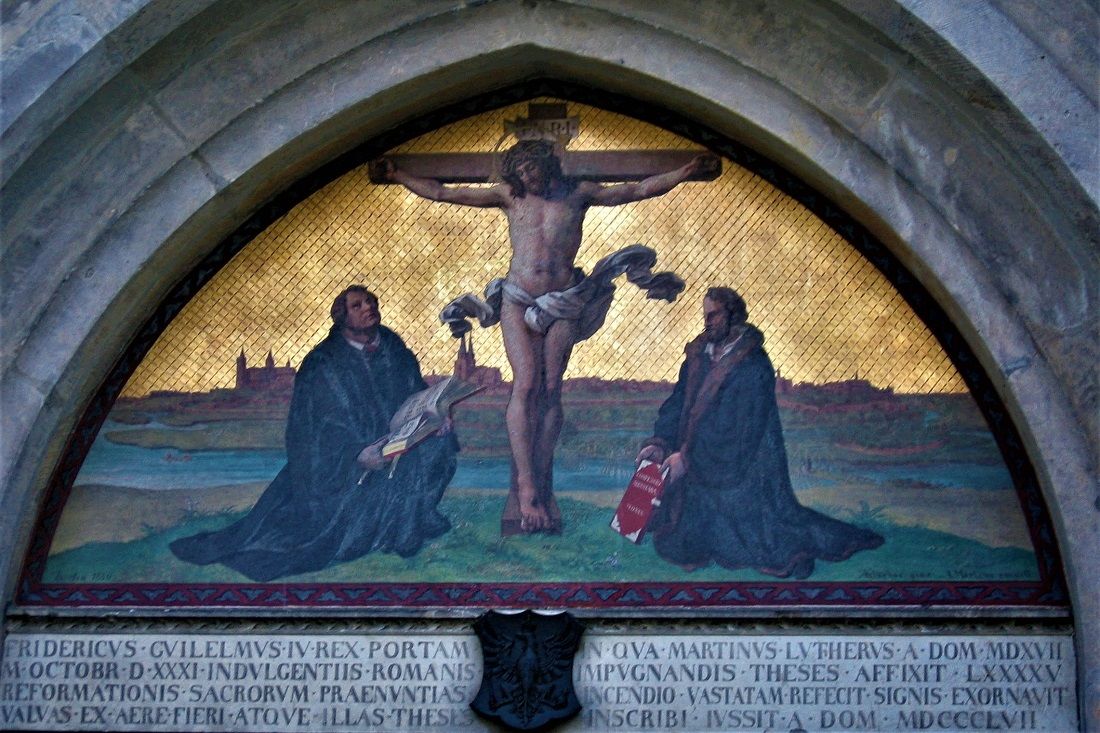 14What is the profit, my brothers, if someone claims to have faith but does not have works? Is faith able to save him? 15If a brother or a sister are [sic] naked or lacking in daily food, 16And one of you says to them, “Go in peace, be warm and sated,” but you do not give them the body’s necessities, what is the profit? 17So also faith by itself, if it does not have works, is dead. 18Yet someone will say, “You have faith and I have works.” You show me your faith without the works, and I will show you faith by my works. 19You have faith that God is one? You are doing well. Even the daemonic beings have that faith, and they tremble. 20But are you willing to recognize, O you inane man, that faith without works yields nothing? 21Was not our father Abraham made righteous [or: proved righteous] by works, offering up his own son Isaac on the sacrificial altar? 22You see that faith cooperated with his works, and by the works the faith was brought to completion, 23And the scripture was fulfilled: “And Abraham had faith in God, and it was accounted to righteousness on his part,” and he was called a friend of God. 24You see that a human being is made righteous [proved righteous] by works, and not by faith alone. 25And, likewise, was not Rahab the prostitute also made righteous [proved righteous] by works, sheltering the messengers and sending them forth by a different path? 26For just as the body without spirit [breath] is dead, so also faith without works is dead.

James refers to his hearers’ “profit” and “salvation” in verse 14 (“What is the profit, my brothers, if someone claims to have faith but does not have works? Is faith able to save him?”). His pointed questions indicate that it is his readers’ actions that should garner either praise or blame, not merely the conceptual content of their beliefs. If the world is to see the hope of salvation made manifest, it can only see it embodied in the actions of the disciple-community. It is in their works where the truth and the life of their belief are seen to be real. And if the disciple-community truly desires and proclaims salvation for others, it can only do this convincingly by enacting Christ’s law of love before the watching eyes of the peoples among whom it dwells. James makes no bones about it—salvation is active love, and there will be no profit from one’s faith unless that is the visible standard by which it lives.

Verses 17 and 26 stress this expectation by making the startling assertion that faith without works of love (i.e., the moral law) is dead. The verses that come between these two “bookend” verses flesh out the claim, but James gives us an image here that should linger in our minds. Faith, he says, is like a human body. It can be alive and well, or it can be sick and languishing (which might describe the spiritual state of those he addresses), or it can be completely dead and in the process of decaying. In the Law of Moses, a lifeless corpse was considered unclean, and so was anybody who came into contact with it or whatever it had touched:

James knows that his comparison of a lifeless “faith” (one without “spirit” or “breath”) to a lifeless body implies that the former is impure or unclean. Again, we are reminded that he has already advocated “pure and undefiled religion” (1:27), so his likening of a dead “faith” to an impure and contaminating corpse is particularly scathing. If faith is to be alive—that is to say, if it is to be real—it must be vibrant with activity and health. It must breathe and possess spirit. And the proof that it is in fact alive is that it works.

Verses 18 and 19, therefore, rebuke those who would divide faith and works, putting asunder two aspects of what is essentially a single, indivisible reality (and one cannot divide the breath from the body without death being the result). For James, faith is works and works are the revealing of faith. Verse 18 is clumsily written, perhaps, but its meaning is obvious: real faith can’t exist apart from works. Works alone “show” faith’s actuality. Verse 19, then, ridicules a “faith” (that is to say, “belief ” in the sense of acknowledging a conceptual truth—James cites as an example of this a merely intellectual assent to the formula that “God is one”) that even demons share. The sharpness of James’s thrust is that one can be thoroughly evil and yet possess a cerebral, but fruitless, “faith.” And whatever demons may be, apparently they are not theologically clueless, and so they have the good sense to “tremble” before the reality they must begrudgingly confess. But James implies that those who would presume to separate faith and works haven’t even the good sense demons possess. Just as “God is one,” so faith and works are one. To drive a wedge of abstract theory between them is an aberration of the gospel, and to oppose one against the other is to disregard the teachings of Christ.

The choice of Rahab as an illustration is a suggestive one, not because she was a woman, but—more to the point—because she was a gentile. James may be going out of his way here to include his gentile readers by way of drawing on an instance of gentile heroism. Otherwise, Rahab could be considered an odd choice and James’s example somewhat strained, equating as it does an act of deception on Rahab’s part with the works of charity to the disadvantaged that James has been keen to stress above (1:27; 2:15-16). Rahab, of course, is also presented as an example (of faith, as it happens) in Hebrews 11:31, but in that chapter she is just one in a long list of worthies, and so she doesn’t receive the same focused attention as James gives her. Here she is complementing the example of the patriarch, Abraham. In a similar vein, when we come to chapter five, we will see James holding up another gentile—in this case, Job—as an example to his readers of endurance (5:11), followed by the example of Elijah regarding prayerfulness (5:17). It is just possible, then, that James chose three non-Jews among his four exemplary biblical figures because he was sensitive to the fact that a significant number of his readers were themselves gentile converts.

Abraham, James’s primary example, stands above the Jewish-gentile divide. He was the father of the Hebrew people, but a Chaldean himself. James’s choice of Abraham as an example of “works” may be a pointed one, since he was used by Paul as an example of “faith apart from works” (Rom. 4; Gal. 3:6-29, 4:21-31). And, in fact, Paul quotes Genesis 15:6—“And Abraham had faith in God, and it was accounted to uprightness on his part”—just as James does above in verse 23. To simplify Paul’s argument to its barest essentials, Abraham was “accounted righteous” before he was ever circumcised (one of the “works” of the Law that Paul regards as unnecessary for gentile believers), and it was his trust in God without such works that made him “righteous” in God’s eyes. Thus, says Paul, following Abraham’s example, gentiles do not need to be circumcised or submit to the Law’s ceremonial observances (“works”) in order to be liberated from slavery to sin and made righteous.

James’s point, in contradistinction to Paul’s, is that Abraham’s saving “faith was brought to completion” through his “work” of obeying God in the matter of Isaac’s “sacrifice.” Again, as we have noted, by “works” James means the moral Law, not external observances such as circumcision. And as with his example of Rahab, the example of Abraham may also seem strained. After all, James’s chief concern is really the essential place of loving works in Christian religion, but Abraham’s willingness to offer up the life of his son could well appear to us to be anything but a loving work. And yet that supposition on our part would perhaps be to misunderstand the significance of this story within the larger tradition. Hebrews 11:17–19 reflects something of the importance “the binding of Isaac” had for early followers of Jesus, as well as for Judaism in general, emphasizing that it was a test of Abraham’s obedience (and his faith, it should be noted, is said to have been so strong that he trusted that God could resurrect Isaac, even if the sacrifice had been completed). Similarly, James’s emphasis is on obedience to what God and God’s servant, Jesus the Anointed, commands. Abraham’s initial faith could only be made evident by his subsequent willingness to obey God, which meant doing the difficult and painful thing he was commanded to do. The disciples’ faith can likewise only be made evident by obeying the teachings of Christ—a commitment which is not always easy to maintain—to love, forgive, renounce all condemnation of others, perform good works for those in need, and so on.

Whether or not we find the “test” of Abraham’s faith in Genesis 22 morally compelling in our day and age, we should not lose sight of James’s essential meaning: “You see that a human being is made righteous by works, and not by faith alone” (vs. 24). And “works” in James’s mind refers not to any morally dubious demand for sacrifice like the one in his scriptural analogy, but to active obedience to the lovingly moral demands of Jesus. That, in turn, is nothing else than purified obedience to God’s moral Law, which is what makes faith real, living, and attractive—a viable and visible alternative kingdom to the dominant kingdoms of “the cosmos.” “So let your light shine out before men, so that they may see your good works and may glorify your Father in the heavens” (Matt 5:16).

Editorial Note: This excerpt is adapted from Addison Hodges Hart, The Letter of James: A Pastoral Commentary (Eugene, Oregon: Cascade, 2018), 70-71 (translation of James 2:14-26, by David Bentley Hart); 75-78. Reprinted by permission of  Cascade Books. 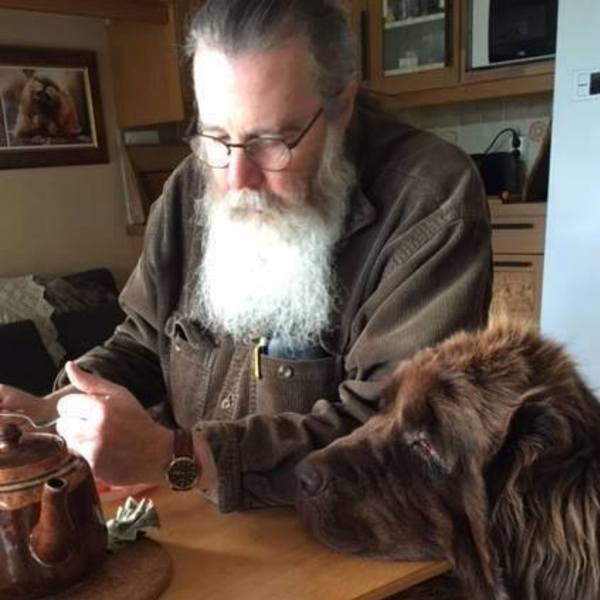 Addison Hodges Hart is the author of six previous books on the topics of scripture, spirituality, interfaith dialogue, and doctrine. His two most recent books are Strangers and Pilgrims Once More: Being Disciples of Jesus in a Post-Christendom World (2014) and The Woman, the Hour, and the Garden: A Study of Imagery in the Gospel of John (2016), and, most recently, The Letter of James: A Pastoral Commentary. He is a former university chaplain and priest, now residing in Norway with his wife.