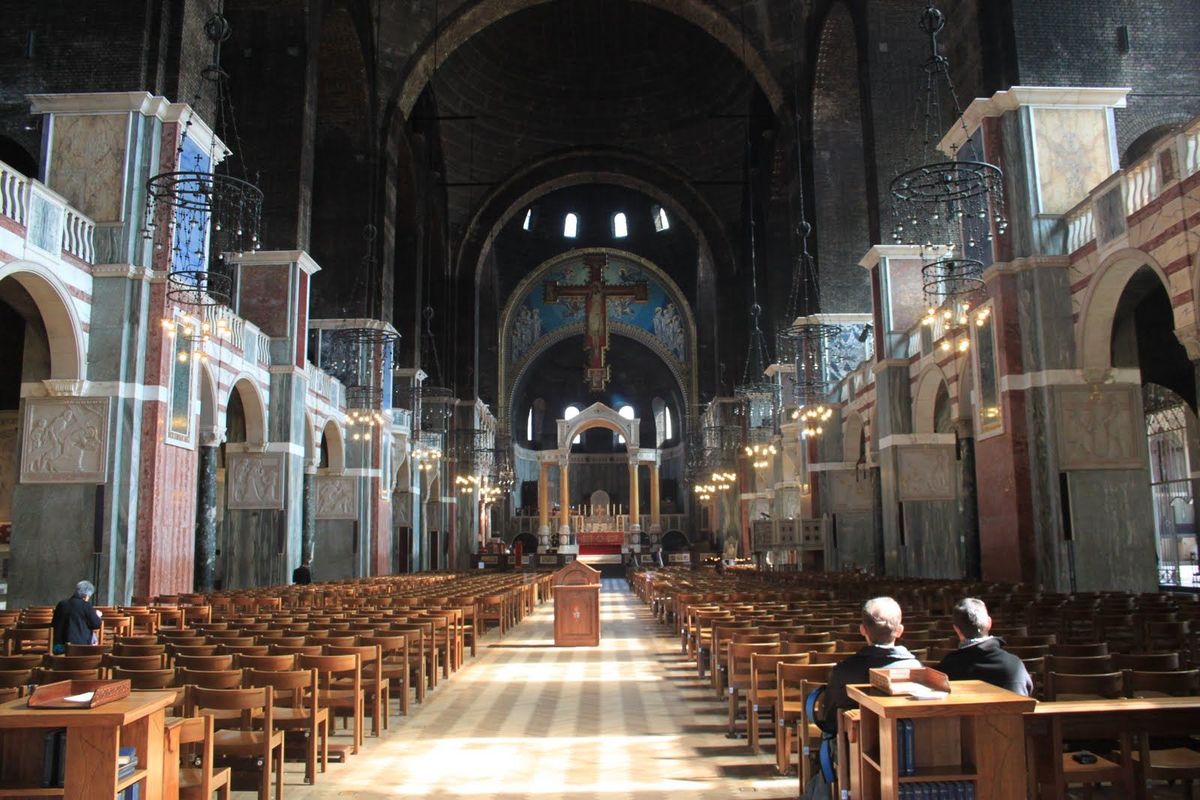 Editor's Note: This week, the director of the Notre Dame Center for Liturgy and the editor of Church Life is visiting the United Kingdom to give a series of talks on liturgy and secularization. He is also beginning an inter-disciplinary research project related to this topic. He will be blogging about his trip over the next seven days.

After a rather dreadful travel delay, I arrived in London early Sunday morning. When my cross-examination by British custom agents was complete (an inquiry in which I had to emphasize that I liked my job and was not trying to secure a rogue faculty position in the UK), I found my way to my hotel in central London. Checked in and no longer smelling like I had been on a plane for 10 hours, it was time to get to Mass at Westminster Cathedral for the 2nd Sunday of Lent.

From my hotel, I wandered down toward Buckingham Palace. Since it was nearing noon, the streets were full of tourists longing to get a sight of the queen (and then make their way to Big Ben), runners completing their Sunday morning rites, and a fair number of men looking to set up shop in a pub for the afternoon. The crowds thinned as I got closer to Westminster Cathedral, the bells ringing out of the massive, neo-Byzantine (and still incomplete) building.

I've always been partial to churches in urban areas. Entering Westminster, you find yourself escaping the hustle of the city, joining with countless unknown worshippers of all races, of all languages, of all levels of religious engagement. Entering the church removes oneself from the saeculum, the ordinariness of city life.

Yet this removal is not a matter of "escaping the world." For urban churches in Europe, especially large cathedrals, continue to serve a variety of purposes even while Mass is unfolding. Crowds of people continued to enter the Cathedral, escaping to one of the side chapels to light a candle. Throughout the liturgy, there was never really a moment of total silence. A low level din of activity continued throughout Mass as the men and women of the city of London (and really the world) offered themselves to the living God in nearly every way possible.

This constant activity, nonetheless, was not due to a lack of reverence. Men and women kneeled in Eucharistic devotion during the Mass. They kissed the feet of Our Lady of Westminster, a late medieval statue that escaped the tragic iconoclasm of the English Reformation. They prayed novenas in side chapels, asking that God act here and now in their lives. The activity in the Cathedral was not frenetic, not a matter of mere movement, but of deep devotion to God that could not be limited to a single form of piety.

There was something especially poignant about this rich devotional tapestry in the context of an incomplete cathedral, in a country where Catholics once had to practice their faith in secret. If you've ever been to Westminster Cathedral, you know that the luminous mosaics of the space give way to dark brick. The apse is still incomplete (and perhaps may always be). Yet in this cathedral-on-the-way, one discovers a rich practice of faith. You almost forget that the space in not finished.

Westminster Cathedral, including its incompleteness, functions as a symbol of the state of Catholicism in late modernity. Of Catholicism in a secular age. The church was packed with visitors, with those who simply want to see the architecture of the space, with worshippers, with families trying to pray, with homeless men and women escaping the rain outside. It was a space that attracted men and women of all kinds, taking them up into the Eucharistic love of God (whether they were there for that reason or not).

It is an unpretentious Catholicism that exists in the midst of a city whose cultural memory of its religious past has declined. But this space fights against this forgetfulness, reminding men and women that they are created for divine worship.

It was not a Catholicism that was to be rigidly imposed. There was a freedom of practice that you often fail to find in American Catholicism either on the right or on the left. The Mass itself was sung and included English hymnody and music from Taize. The priest wore a fiddleback chasuble and used copious amounts of incense. All the prayers of the Mass were chanted in English. No one minded that Mass was "interrupted" with devotional practice taking place in side chapels. Every way that you could be Catholic...the Cathedral allowed it.

But Westminster Cathedral isn't a program. It isn't a bureaucracy or a best practice. It's not an idea or an ideology.

It's a space where divine love is made present for the person. It's a space where one can freely adore the living God (or fall asleep or wander around). It is an incarnation of Catholic faith in a particular place, an embodiment that makes it impossible for England to forget that God is love. That there are people throughout the world who are not secular. Who still organize their entire lives around the Word made flesh.

Spaces and places matter in Christianity precisely because of the Incarnation. Human history, including my own, is to be taken up into the narrative of divine love that is the Church.

Westminster Cathedral, and the many spaces like it throughout the world, may be the best medicine against the secular that we have.