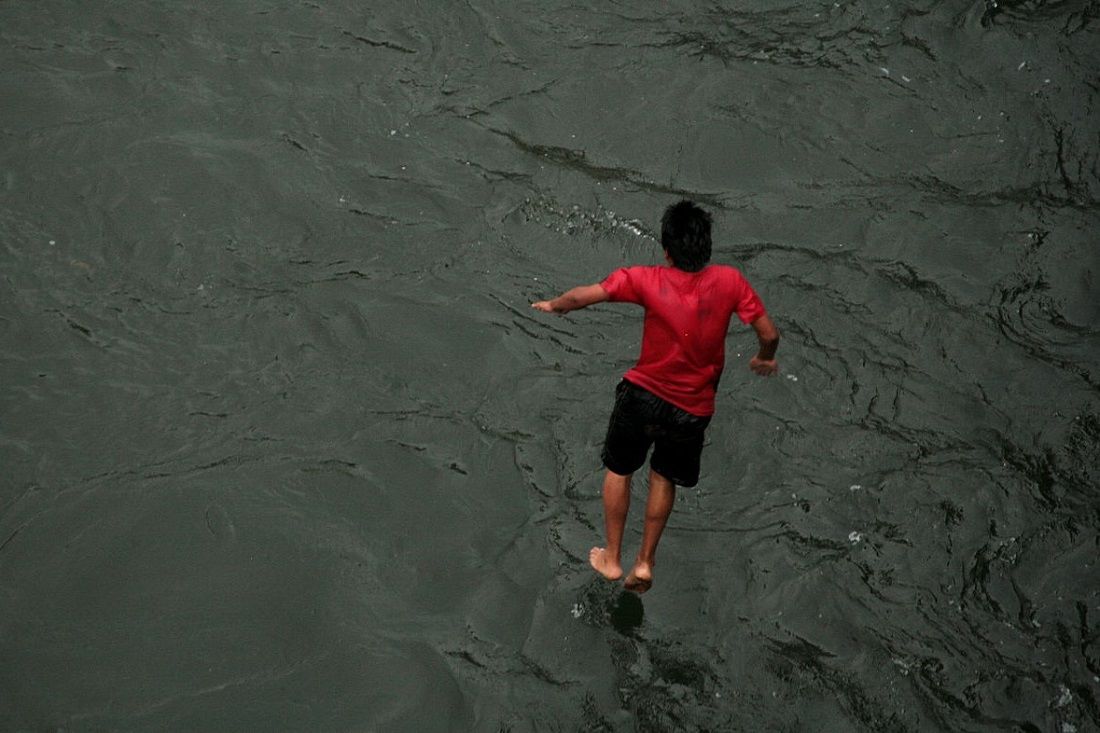 After Jesus feeds the five thousand in a desolate place, he puts his disciples in a boat to cross the sea (Matt 14:22-36). They begin to founder. Matthew says they are “afflicted,” a word that connotes “torture” (14:24), but Jesus appears out of nowhere and brings them to safety.

This is an Exodus story. While the disciples struggle to avoid capsizing, Jesus is on a mountain, alone, just as Moses went to the mountain alone to pray. Jesus comes to them in the “fourth watch of the night”—in Roman time reckoning, towards daybreak (14:25), just as Yahweh confused Pharaoh’s chariots and divided the sea at the “morning watch” (Exod 14:24).

Jesus’s words reinforce the exodus character of the event. When he appears on the sea, he assures his disciples with “It is I” (14:27). We recall Isaiah, where Yahweh assures Israel they will survive and return to the land by saying, repeatedly, “It is I. It is I” (Isa 41:4; 43:10). Jesus’s statement is a variation on “Yahweh,” the name revealed to Moses by the Burning Bush on Mount Sinai. As the incarnate Yahweh, Jesus is the one who is with the disciples, the ever-present, the ever-faithful, the ever-attentive, the “I am.”

In the Old Testament, Yahweh and Yahweh alone has power over the sea. The sea’s tumult is baffling and threatening, especially to a land-based people like Israel. It represents the surging flood of Gentiles that needs to be held back from their land. As Saint Augustine said (On Genesis, Against the Manichees, I.37), “the nations . . . are aptly signified by the name of sea, unstable in their errors and tossed about by doctrinal futilities of idolatry as if by all the winds of heaven.” Sometimes, the nations surge and overwhelm the land, carrying Israel to the corners of the earth.

Threatening as the sea is to Israel, it is not a threat to Yahweh, who strides across the waves as if they were dry land. He stretches the heavens and “tramples down the waves of the sea” (Job 9:8). At the Red Sea, his “way was in the sea” and his “paths in the mighty waters” (Psalm 77:19). When Yahweh comes in judgment, he tramples the sea with his horses “on the surge of many waters” (Hab 3:16). Creation is a hydraulics operation, and the Creator retains his mastery of the waters.

Jesus possesses the same power over the waves, the same authority to walk on the sea and to calm the affliction. What manner of many is this? Truly He is God’s son, King of the sea and of the nations it signifies (Matt 14:33).

Startling as that may be, Matthew draws our attention to something even more startling. For the first time in the Gospel, Peter takes a lead role. He becomes the chief apostle, representative and spokesman for the rest. As Jesus is a new Elisha, Peter is often a Gehazi, Elisha’s ambiguous, bumbling servant.

Some interpreters think Peter presumptuous and impetuous for jumping out of the boat before Jesus arrives. I disagree. After all, Peter can walk on the sea. Though he does not get very far—frightened as he is by the waves and storm—he does walk for a few moments He shares Jesus’s, and Yahweh’s, sovereignty over the sea. With only a “little faith,” Peter can do what Jesus did. What will happen when his faith grows? Then Peter will uproot mountains and toss them into the sea.

Throughout the Old Testament, Israel’s leaders train as shepherds. They care for sheep and goats as they prepare to shepherd Yahweh’s flock. As soon as the New Testament begins, the scenery changes. The Gospels do not take place in remote pasturelands but on the shores of Tiberius. Jesus does not choose shepherds but fisherman.

That scene change symbolizes the dawn of a new covenant, when the Lord’s work will no longer be focused on a small plot of land on the eastern Mediterranean, but will expand to encompass the sea of Gentiles. Launching out from the land of Judea, the Church is a ship, a little bit of land, tossed about by the waves. This episode foreshadows the Church’s future success: Someday, the apostles will all be like Peter, walking on the waters and not sinking.

This episode shows what you can expect as you take the wheel to pilot this congregation. As you follow Jesus’s command and push off from shore, you will face storms, afflictions, torturous trials. Do not expect smooth sailing. Be prepared for hurricanes.

I would like to assure you that Jesus will always be there, standing behind you with his hand on your shoulder. Matthew opens a more troubling prospect: When the storm comes, to all appearances, Jesus will not be there. You will endure the challenges of following Jesus and steering his Church without him.

You will not be the first to be left on your own. Yahweh built Eve for Adam, then disappeared, so Eve and Adam would face the serpent’s temptation without the Creator. After Jesus heals the man born blind, he leaves the scene, and the man faces Pharisaical attacks alone. The disciples are thrown out into mission after Jesus returns to his Father. You may well echo Jesus’s cry of dereliction: My God, my God, why have you forsaken me?

I can assure you: Jesus will come, through the darkness and tumult. To you, as to the Twelve, Jesus will speak across the deep: “Take courage; it is I. Do not be afraid.” The storms will calm when Jesus arrives, and you will discover a new fields for mission among those who look to him for healing.

In the meantime, there is nothing to fear. Jesus leaves you not to destroy but to strengthen your faith, and on the far side of the tempest, after sharing his abandonment as he shared yours, you will have a fresh encounter with Jesus. In the words of Francis Thompson:

So (when so sad thou canst not sadder)
Cry;—and upon thy so sore loss
Shall shine the traffic of Jacob’s ladder
Pitched betwixt Heaven and Charing Cross.

Yea, in the night, my Soul, my daughter,
Cry,—clinging to Heaven by the hems;
And lo, Christ walking on the water,
Not of Genesareth, but Thames!

And not only that: In the midst of the storm, when the surf crashes around you, you can expect to share the power of Jesus. Like Peter, you will stride the waves just as he does. Jesus the King of nations gives his Church mastery over the nations, so that the surging sea will be dry land beneath our feet. Keep your eyes on him, not on the waves, and you will guide this church over the waves, as through dry land, in a continuous exodus to the land of promise. 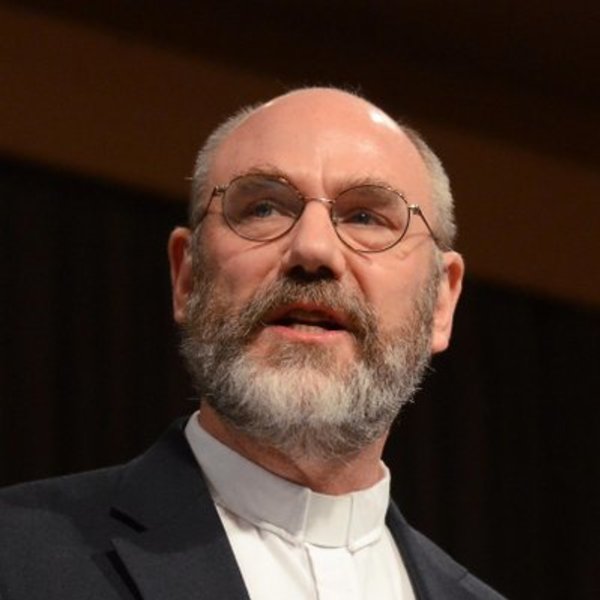 Peter Leithart is President of the Theopolis Institute and author of many books, including The End of Protestantism: Pursuing Unity in a Fragmented Church.

Can You Square the Feeding of the 5,000 with Science?

Noelle Johnson, Institute for Church Life intern in the Science & Religion Initiative, considers the compatibility of science and the Feeding of the 5,000. 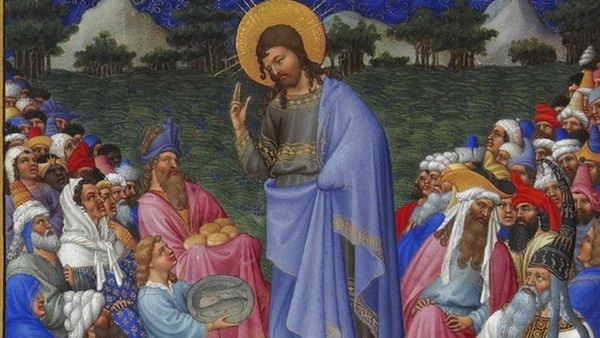