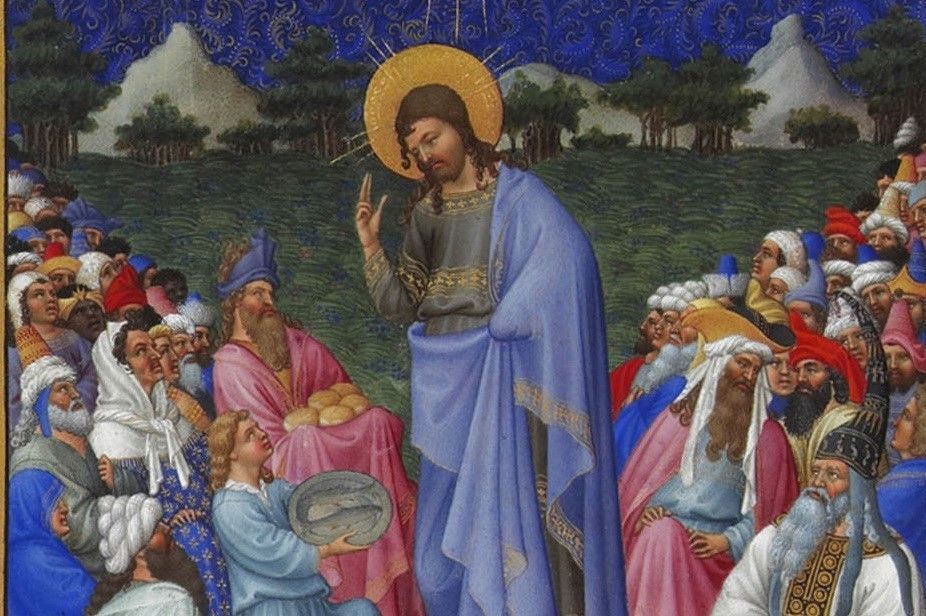 We read the story of the feeding of the five thousand in all four Gospels. In John’s Gospel, it is immediately followed by the Bread of Life Discourse, in which Jesus lays out clearly the doctrine of the Eucharist. His teaching is quite clear: “Very truly, I tell you, unless you eat the flesh of the Son of Man and drink his blood, you have no life in you. Those who eat my flesh and drink my blood have eternal life, and I will raise them up on the last day; for my flesh is true food and my blood is true drink” (John 6: 53-55). From the reaction of the disciples (“This teaching is difficult; who can accept it?” [6:60]) and Jesus’s response to them (“Does this offend you?” [6:61]), we know that Jesus means what he says—otherwise his teaching would not be so hard to accept. The placement of the feeding of the five thousand in all four Gospels, and directly before the Bread of Life Discourse in John’s Gospel, suggests that there is nothing ordinary about this event. It is inextricably tied up with the Incarnation—a miracle (or “sign” in John’s case) demonstrating sacramentally Christ’s identity as the Bread of Life.

Despite the profound significance of this event, its interpretation has nonetheless remained subject to what might be considered the greatest temptation of the exegete—to reduce the mystery of God to purely human logic. Doing this makes acceptance of the faith “easier,” and, essentially, soothes our pride, because we no longer have to admit that there are some things that we just cannot understand.

In middle school, I attended a Mass in which the homilist claimed that the feeding of the five thousand was not a miracle at all, or, if it was, it was simply a “miracle” of human kindness. According to this interpretation, Jesus does not miraculously multiply five loaves and two fishes to feed five thousand people (with twelve baskets of food left over), but rather, his teachings about loving one’s neighbor prompts his followers to share food that they have all already brought with them, and thus, all five thousand are fed. Not only does this interpretation directly contradict certain statements of the text, such as the fact that Jesus himself distributes the food, but it portrays a very concerning conception of God. Do we really want a God who can be explained simply by human kindness? Shouldn’t the actions and motives of an infinite God, Love himself, be at least somewhat beyond the reach of our explanations?

This problem has direct implications on the faith and reason, and more specifically, the science and religion debate. It seems, at least at first glance, that if we cannot understand the actions of God, then they must be unreasonable. And, if they are unreasonable, then faith is relegated to some irrational space outside of the intellectual sphere. It then becomes a merely personal faith that cannot be explained using reason, and, if one follows this line of thought to its logical conclusions, a faith that is not worth holding at all.

There are at least two ways that we can propose to answer these questions. The first is the idea of a “higher logic.” Just because we cannot explain the actions of God on our own terms does not mean that his actions are unreasonable or illogical. Take, for instance, the example of the concept in modern physics known as “special relativity,” with its ideas of time dilation and length contraction. Since these phenomena only occur at speeds approaching that of light, people do not experience them, and thus they seem “wrong” to the average individual. However, this does not take away from the fact that they are indeed true (at least according to scientific measures). One could say that these principles operate at a certain higher logic.

As inapplicable as the ideas of special relativity may seem to everyday experience, they suggest an important analogy: transcendent logic may be unfamiliar, but unfamiliarity is not the same as invalidity. In reality, what may seem unfamiliar can in fact be more logical than what is familiar, because it provides a more comprehensive view of the world. This principle perhaps illuminates to some small extent the idea of supernatural reason. Humankind will never be able to fully comprehend God and all His thoughts—God’s logic is infinite, and men are finite. Thus, he must reveal himself to men in order for men to know him. The Catechism of the Catholic Church tells us that “Our human words always fall short of the mystery of God” (CCC §42), but this only means that God is more logical than we are categorically capable of understanding as finite creatures.

The second response is that different ways of knowing have different domains and methodologies. Science, philosophy, and theology use reason in distinct ways. In his book New Proofs for the Existence of God, Fr. Robert J. Spitzer delineates the difference between metaphysical reasoning and scientific reasoning. He explains that metaphysics deals with completely disjunctive categories, which means that one of the categories must be true and one must be false at all times. For example, if an object exists, it must be either finite or infinite. If you disprove that it is infinite, then you have proved that it is finite. In contrast, scientific reasoning cannot prove by disproof. He writes that “since a negation in science (e.g., “object X is not a proton”) refers to a virtually infinite range of possible alternatives, science is forced to prove a specific characteristic about an object through experimentation.”[1] In this sense, one cannot strictly say that science has proven that something can never happen or is impossible, because science can only prove positive facts about physical phenomena. Thus, the accusation that “science has proven faith false” is categorically incorrect.

Finally, metaphysics has a much broader domain. However, even pure philosophical reason is not adequate for understanding the mystery of God. St. Thomas Aquinas writes in the first article of the Summa Theologica that it is “necessary that, besides philosophical science built up by reason, there should be a sacred science learned through revelation.”[2] And, we do not ask reason, or science, to make decisions about Divine Revelation. Pope St. John Paul II writes that “Reason in fact is not asked to pass judgement on the contents of faith, something of which it would be incapable, since this is not its function. Its function is rather to find meaning, to discover explanations which might allow everyone to come to a certain understanding of the contents of faith” (Fides et Ratio §42).

Thus, when approaching the mysteries of our faith, it is wrong to reduce them to scientific knowledge, but is equally dangerous to assert that they are thus unreasonable. The feeding of the five thousand cannot be explained according to the principles of contemporary science, and it also is not reducible to an “easy” explanation such as human kindness. However, this ultimately does not make it absurd, or hard to believe. In fact, it makes the assent of faith more logical, because it preserves God’s perfectly transcendent nature. A God we could fully explain would be no God at all.