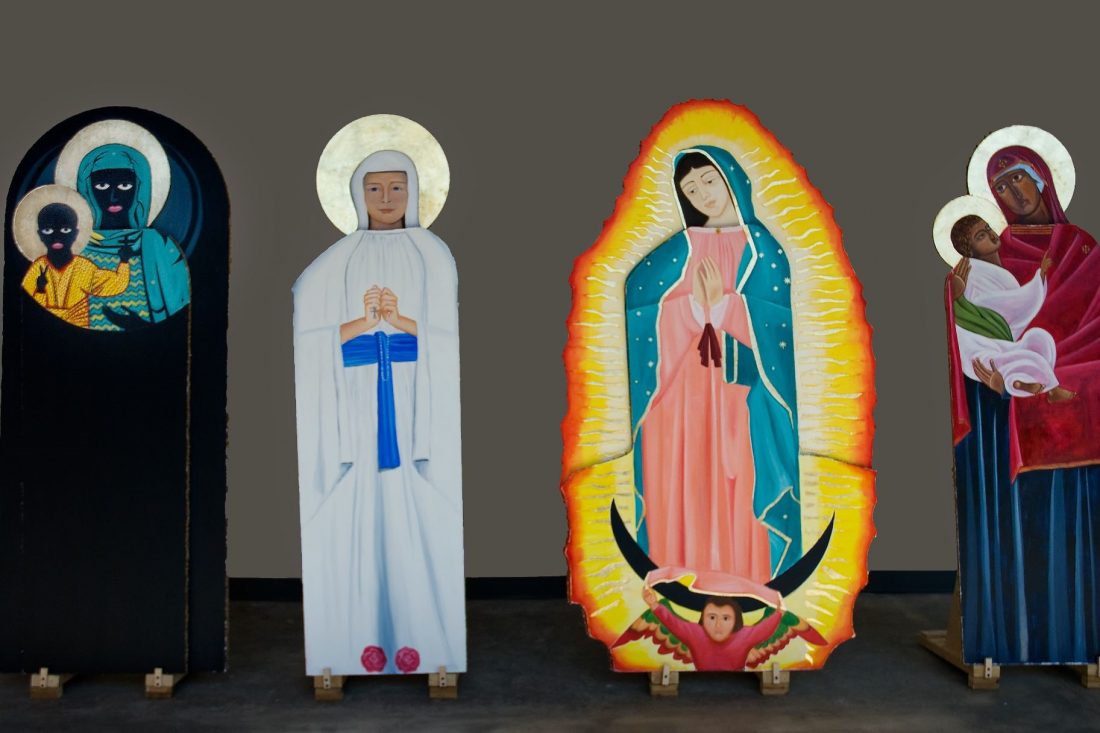 This August I will celebrate five years since being received into full communion with the Catholic Church. My journey into the Church was a long one, at least ten years. When I began telling friends and family about my upcoming reception, like most Catholic “converts” I received a wide range of reactions. I’d been raised within a small Protestant holiness denomination and later, during graduate school, I was confirmed in the Episcopal church. In addition to this, for many years I’d been studying and practicing canonical icon writing with a Russian Orthodox school of iconology. Some people couldn’t understand why I’d leave the Episcopal church as they knew I had convictions about women’s leadership in the church. Others couldn’t understand why I wasn’t becoming Orthodox, given my passion for the holy images. It is never easy to explain such journeys, and it is not my personality to attempt explanation. But some loved ones needed to hear something by way of explanation and so, when I found it pressing, I gave the best answer I could offer, which also happened to be the simplest: I became Catholic because of Mary. More specifically, I became Catholic because of Mary’s image. In other words, for many, their reasons for why I should not become Catholic were precisely my reasons for doing so.

Mary’s image—it’s an odd thing to claim. Perhaps even more odd is the fact that I can refer to something in the singular and any reader will know what I mean and have her own mental images to inform that meaning. Images of Christ’s mother have become so ubiquitous that, despite the numerous cultural instantiations, she is readily recognized across contexts. Through her image, Mary is at once dark and light skinned. She is both full of grace and power.  She is Mother of God and Mother of All. It is this juxtaposition of the universal and particular that led me to create Mary: The Paper Doll Project, an interactive exhibit of four life-sized (approx. 6ft) “paper dolls” representing four cultural depictions of the Blessed Mother: Madonna and Child of Soweto, Our Lady of Lourdes, Virgin of Guadalupe, and a Byzantine Eleousa. Each “doll” has two painted layers. The outer layers may be exchanged between the dolls, creating a multiplicity of Marian images. As a theologian and artist I find creating such work to be a particularly challenging way of thinking theologically. Dealing with the concrete forces questions to the surface, often creating new questions in the process. With this project, I was attempting to explore what is lost and what, if anything, might be gained in stretching the mimetic through playful disruption. Does Mary’s universality precondition all cultural particularity? How does the particular function apart from the universal? Does it? Rather than being a subversive deconstruction of holy images, I was attempting to practice and perform a theological speculation.

I created the exhibit in 2010 and at the time I was still Protestant, although Mary had been ministering to me through her image for many years. In fact, I didn’t realize how Protestant I was until I was asked by a friend and faculty member at Duke Divinity School, Curtis Freeman, if he could bring a group of Catholics and Baptists to see the exhibit. It just so happened that the Divinity School was hosting the third International Conversation co-sponsored by the Vatican and Baptist World Alliance, and their theme was to be “Mary in the Communion of the Church.” I was glad to meet with the group, but when I did so I noticed a stark contrast between the responses of the Catholics and the Baptists. At the time I was not sure who was Catholic or Baptist. I only sensed a tension that was later confirmed when Curtis pointed out it was the Baptists who seemed most engaged and even enthusiastic about the exhibit. The Catholics were overall quiet and somewhat removed. I do remember one participant mentioning that such an exhibit would cause an uproar in her home, which was somewhere in Central America. I was fascinated and puzzled as to why, but she explained it is because such playfulness would be seen as irreverent of the Holy Mother. I did not understand at the time, but the comment left a lasting impression on me. I began to realize it was the same for most of the Catholics present that day. But as a Protestant, I thought I’d proven my solidarity by creating an exhibit about Mary. It would take a while longer before I would understand the crucial difference between affinity and reverence, between displaying and venerating an image of Mary. For the Baptists, as I’ve found with many Protestants today, the display of Mary’s image no longer offends or incites charges of idolatry. But neither does it invite veneration and arouse a holy kiss. She is safe—as long as she is presumed not to be present.

By the guidance of the Holy Spirit, the Church has, since the second council of Nicaea (787), claimed the making and venerating of holy images as not only legitimate but an integral part of Christian worship. To be Christian is to venerate the holy images of Christ, his Blessed Mother, and the saints.

We decree with full precision and care that, like the figure of the honoured and life-giving cross, the revered and holy images, whether painted or made of mosaic or of other suitable material, are to be exposed in the holy churches of God, on sacred instruments and vestments, on walls and panels, in houses and by public ways, these are the images of our Lord, God and saviour, Jesus Christ, and of our Lady without blemish, the holy God-bearer, and of the revered angels and of any of the saintly holy men. The more frequently they are seen in representational art, the more are those who see them drawn to remember and long for those who serve as models, and to pay these images the tribute of salutation and respectful veneration. Certainly this is not the full adoration {latria} in accordance with our faith, which is properly paid only to the divine nature, but it resembles that given to the figure of the honoured and life-giving cross, and also to the holy books of the gospels and to other sacred cult objects. Further, people are drawn to honour these images with the offering of incense and lights, as was piously established by ancient custom. Indeed, the honour paid to an image traverses it, reaching the model, and he who venerates the image, venerates the person represented in that image.


The Council will go further to anathematize those who refuse the holy images and their veneration:

If anyone does not salute such representations as standing for the Lord and his saints, let him be anathema.


When I created Mary: The Paper Doll Project I had not yet understood that Catholics and Protestants represent different economies. My ongoing study of Christian iconology has enabled me to see not only this, but what is at stake in this observation. The short answer is: a lot.  Iconoclasm is not a matter of aesthetic preference; it is the imposition of an alien economics.

John Damascene, the first iconodule theologian, understood what was at stake in the iconoclastic impulse. During the first wave of Byzantine iconoclasm (730-787 AD), he wrote three treatises in defense of the divine images.[1] These are short but dense treatises detailing a theological argument which centers on the Incarnation. He concludes by providing a taxonomy of images and a taxonomy of veneration, because he understood the debates were not simply about the status of images per se. Rather the issue at stake was the unicity of the worshipping community, i.e., the Church, which locates all practices of worship and devotion in the body of the Incarnate One. Historian Jaroslav Pelikan rightly observes Damascene’s taxonomy of images reflects the cosmology of Psuedo-Dionysius (6c.).[2] That is, the iconic economy reveals “the great chain of images” that corresponds to an orthodox cosmology upon which the Church’s worship is based. Pelikan argues, what Damascene successfully shows is that in their acceptance of some religious images (e.g., the cross, Jesus) and rejection of others (Mary, the saints), the iconoclasts have broken and therefore rejected the chain, that is, the entire economy.

Much like their iconoclast predecessors, the Protestant reformers took as idolatrous Catholic practices of veneration, believing them to displace the honor due only to the LORD. This misperception of the grammar of Christian iconology, again, is a Christological matter. The Incarnation changes everything; in particular, it changes how we are to understand the role of mediation in the divine economy. When the Church distinguishes between latria, the worship due only to the LORD, and dulia, the veneration of holy persons, places, and things, it is affirming four axioms that follow logically from Christology:

When the Protestant reformers rejected iconodulia as a Christian practice, championing instead sola scriptura, they introduced a new economy. Whereas veneration presupposes hierarchy, this new economy ultimately flattens the Dionysian hierarchy/cosmology, presupposing instead the individual’s unmediated relationship to the Lord, facilitated by her intimate knowledge of the written scriptures alone. As such, the status of the Church necessarily holds different meaning for each economy.  If the hierarchy flattens, the Church itself will become accidental to Christian life. There’s little question this is the reality we witness today.

These are complex matters. And they touch on tensions that continue to divide Christian bodies today. They will not be resolved easily. But there is hope.

As a Catholic, I continue to exhibit Mary: The Paper Doll Project and as often as possible I accept invitations to speak about it to hosting communities. When doing so, I take the opportunity to focus on Mary’s particular role in the Christological, including iconoclastic, controversies. To say these debates center on the Incarnation is to acknowledge the Theotokos as the key figure. This is true historically but it remains true today: her presence is crucial for any ecumenical hope. Therefore, Catholics should perhaps be less wary of Protestant openness to Mary’s as she may be ministering to them through it. That is what the Church expects and why it has protected her image since its inception.

Throughout this brief essay I have referred to Mary’s ministering to me through her image. Through it, she led me into full communion. This way of stating the matter is but an expression of the Church’s definition of the icon’s role in the holy economy. Just as “he who venerates the image, venerates the person represented in that image,” through the holy images, Christ, Mary, and the saints become present to those who gaze upon their image. And those who gaze may eventually be led to venerate.

Editorial Statement: During the month of May (Mary’s Month), Church Life Journal will celebrate the month of Mary by consider the nature of the  Marian imagination in art, music, sacramental prayer, folk customs, private devotion, and ritual action.

Featured Image:  Marian images made by Carole Baker for Mary: The Paper Doll Project, used by permission of the author, ALL RIGHTS RESERVED. 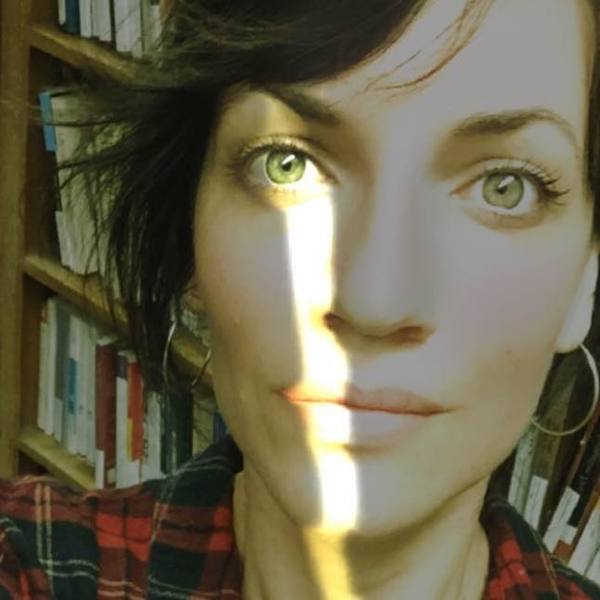 Carole Baker is a Th.D. candidate at Duke Divinity School. Her dissertation, Communion of Incorruption: A Theology of Icons and Relics, looks at the theological significance of relics and holy images and the ecclesiology that informs that significance. Baker also studies traditional icon-writing with a Russian Orthodox school of iconology and exhibits contemporary paintings and installations in both sacred and secular spaces. She is the mother of two.