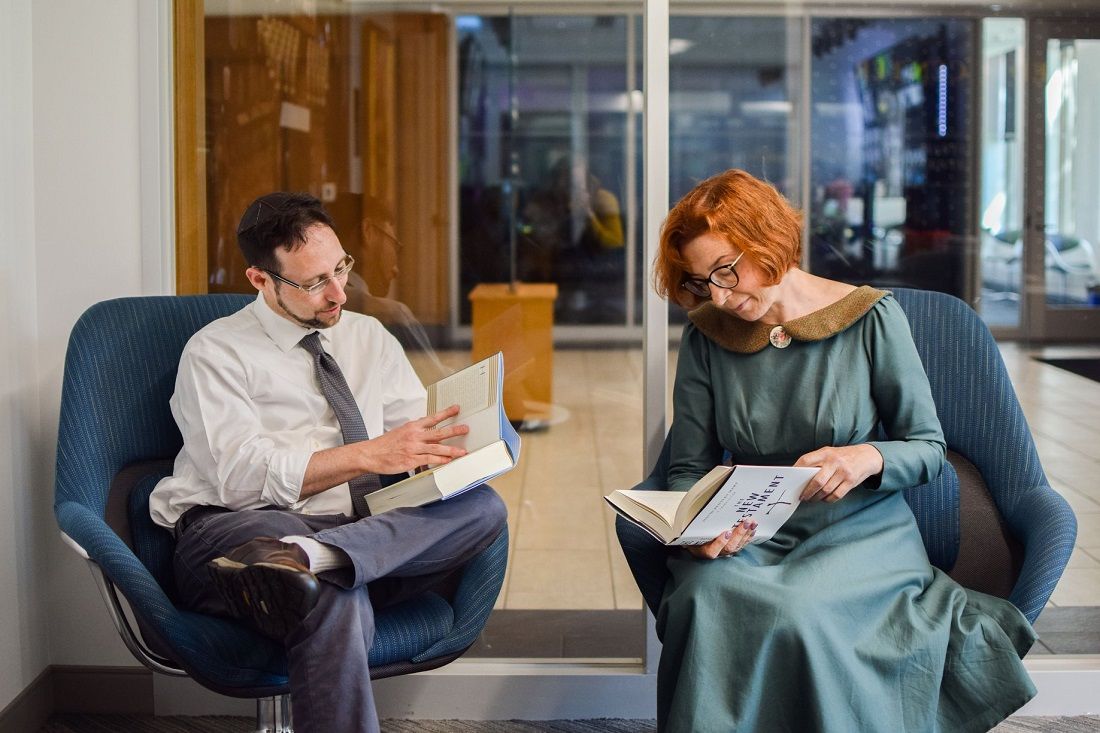 Artur Rosman: Your new podcast is called “Minding Scripture”—where does the name come from?

Gabriel Said Reynolds: The title conveys the vision for the podcast as an exercise in thinking about, or reasoning with, scripture. Back in the 80’s there was a famous ad with an egg in a frying pan with someone saying, “This is your brain on drugs.” Our podcast sort of shows “Your mind on scripture.” The title also plays with the idea that some people “mind” scripture—they object to it and believe that it only leads to fundamentalism. This is a belief which our podcast is meant to undermine and oppose.

AR: Why a new podcast on religion? What is unique about Minding Scripture that you might not find in existing podcasts?

Francesca Murphy: We think it is a good time to showcase scholars of different religions openly discussing their religious differences. We thought it was time for a podcast that takes a theological view of religions. Minding Scripture is the voice of reasonable engagement with religions, especially through their scriptures.

AR: Our readers know about the importance of faith and reason in Christian thought, could you introduce us to the relationship between the two in another religion?

Mun’im Sirry: The relationship between faith and reason has been the subject of discussion among Muslim thinkers for many centuries. Although the core intellectual tradition of Islam is deeply rooted in revelation, it is primarily rational as reflected in the Muslim kalām (speculative theology). Some Muslim theologians like Mu‘tazilites tended to over-emphasize the role of reason, while others tried to prove its insufficiency. And this role of reason in theological discussions continues to be debated by Muslims even today.

AR: The early centuries of the Christian or Common Era also saw the birth of Rabbinic Judaism. How is reasoning a part of the Rabbinic tradition? Could you give an example of how rabbis thought through a problem, or question, in scripture?

Tzvi Novick: Reason, bounded and shaped by Scripture and tradition, is one of the epistemological foundations of rabbinic Judaism. This becomes especially clear in the case of the law. You study the law not simply to know what the Bible tells you to do, but to learn and take part in a tradition of argumentation about what the Bible means, and what earlier rabbis meant. Often in the classical rabbinic corpus you’ll find one rabbi voicing an objection to a view stated by another rabbi in this way: “If the view you’re putting forward is a teaching that you received as a tradition, then I’ll accept it, but if the view you’re putting forward is an argument of your own, then I can refute it.” And then he does. In the rabbinic tradition, human beings can even challenge God’s reasoning. The way the rabbis tell it, for example, God was inclined to punish children for the sins of their parents, but Moses persuaded him that this was unjust.

AR: Why does Minding Scripture focus on Bible and Qur’an, and not Judaism, and Islam, and Christianity more generally?

Gabriel Said Reynolds: All four scholars on our team come with a background in the practice of “Scriptural Reasoning,” a form of dialogue in which Jews, Christians, and Muslims read the Bible and the Qur’an together. By focusing on Scripture (instead of, say, disputed theological points) believers are better able to appreciate what shapes and inspires other faiths. This is especially important for us as we would like to model not only intellectual discourse but also friendship.

AR: Why is the relationship between scripture and reason so important?

AR: How does, for example, the Qur’an appeal to the use of reason?

Mun’im Sirry: Many passages of the Qur’an invite people to think and to use their reason. One of the recurring phrases in the Qur’an is “Why don’t you use your reason (afalā ta‘qilūn)?” The Muslim scripture encourages the exercise of reason by stressing the importance of deep insights and reflections on God’s creation, both nature and human being. In a few places the Qur’an makes connection between the use of reason and the belief in God’s existence.

AR: What is the attraction of being part of a multifaith podcast?

AR: Does dialogue lead to compromise of religious principles?

Gabriel Reynolds: The wrong kind of dialogue does, yes. If believers fall into the trap of compromising their principles they may actually find themselves dislocated from their own tradition, “on their own” and incapable of contributing to mutual understanding between religions. In my opinion it is better for faithful people to disagree well than to agree on something that neither faith actually teaches.

AR: What thinkers or theologians have formed your understanding of faith and reason?

Francesca Murphy: I have been most influenced by Thomas Aquinas, Etienne Gilson and Hans Urs von Balthasar. Thomas Aquinas has the idea that faith fulfills reason. Gilson always argues that a reason which is enlightened by faith can actually be more reasonable. Faith fulfills reason by deepening it and illuminating it, as reason. Faith turns the frog of petty human rationalism into the prince of creative reason. Von Balthasar describes the priority of faith as the priority of the cross of Christ.

AR: How do you hope this podcast will influence the public?

Mun’im Sirry: I hope this podcast will stimulate learned public deliberations and promote deeper interreligious and intercultural conversations. It is true that this podcast is first and foremost a scholarly enterprise, however, it is also designed to educate public discourse, influence educational content and practice, and place scholarship in the service of informed public discussions. So, influencing the public discourse is a crucial part of our podcast.

AR: Why should the general public, religious or otherwise, listen in to Minding Scripture?

Tzvi Novick: For a religious public, I think the podcast offers a rare opportunity to learn both about the scriptures themselves, and about the ways that religious traditions have reasoned through and with them. I hope the podcast can also serve as a model of interreligious dialogue, which is so necessary. Equally, or perhaps even more necessarily, there is a need for dialogue between religious and secular communities. It seems to me that a podcast that puts the spotlight on reason can do a great service in this regard, because reason is the ring that binds us all.