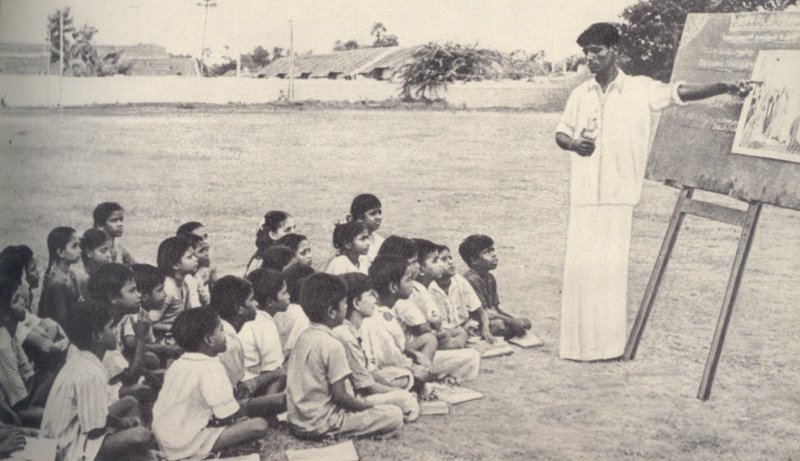 In less than three weeks, I'll be back in the classroom teaching an intensive course introducing over forty students to a fundamental theology for catechesis. Most of my students will be parish ministers, high school teachers, or those involved in campus ministry at a secondary or collegiate level. Each day of the class on our blog, I will offer a series of reflections drawn from our syllabus to invite readers to follow along virtually.

Yet, before launching into this virtual syllabus, I wanted to offer a defense of the course's title: Introduction to Catechetical Theology. Often enough in the academy, catechesis is preceded by the term "mere." While the theologian advances knowledge and is engaged in critical inquiry, the catechist is "merely" teaching the particulars of Christian faith.

Such an assumption fails to grasp that the catechist is performing an act of theological interpretation in every moment of teaching. As Augustine notes in his De doctrina christiana (On Teaching Christianity), the first act of the teacher is not presentation but interpretation. A catechist without a theological education is for this reason a danger in the classroom, who will either rigidly present a Tradition to the student or will deform Catholic teaching in the process of teaching.

The last fifty years of catechesis in the United States has been dominated by these twin problems. Some methods in religious education have placed undue emphasis upon either the subjective or the communal appropriation of the Tradition. Relying upon methods of critical correlation in which the Tradition is modified through "experience," what is passed on is often not Catholic. The Resurrection, for example, is not another example of how life comes out of death. Rather, it is the moment that Jesus, the God-person, is resurrected from the dead. In which our understanding of what it means to die as a human being is forever changed. To reduce the particular claim of the Resurrection to a general religious truth is frequently the result of these methods of critical correlation.

Others have responded to this undue emphasis through rote learning techniques that deaden the Catholic imagination. Many catechists simply have no formation, presenting not the Tradition at all but their own sense of what the Tradition says or repeating stale formulas. The catechist may present evolution as incompatible with Catholic faith, evidence of a dearth of theological (and incidentally scientific) education. This lack of theological knowledge is harmful to the catechist and thus his or her students.

Other approaches to this "rote education" ignore the difficulty of forming a Catholic in a religious tradition in the context of a secular age. It is not enough to proclaim what the Church teaches but one must offer an apologetics of love (a term used by John Cavadini in his own teaching) whereby the student is invited to imagine how ecclesial teaching (as a meditator of an encounter with Christ) may transform one's understanding of the cosmos. A rote education may, in the name of fidelity, bludgeon a religious tradition to death. Not to mention that there are certain aspects of this Tradition in which there is room for the imagination to play. Catholicism is not univocal in every aspect of its teaching, leaving possibilities for ambiguity that the student must discover.

An introduction to catechetical theology is thus forming burgeoning leaders in the field of catechesis in a theological-pedagogical aesthetics and dramatics. Such an approach forms the future leader to first contemplate what is revealed in Jesus Christ through the Creed, through worship, through the moral life, and through a robust existence of prayer. The religious tradition of Catholicism does not reveal general human truths but instead a particular form of life only discernable within the Church's cultural life. It is a narrative of salvation, one that the human being may participate in through contemplative, embodied practice.

At the same time, the catechist must employ pedagogical techniques that are grounded in this aesthetic and dramatic encounter. Critical inquiry, albeit part of any educational project, is not enough. In this sense, catechists need to develop a theological pedagogy, grounded in the Tradition, which fosters an imaginative, fruitful encounter with the person of Jesus Christ mediated through Scripture and the Tradition. Such an approach will emphasize art, music, literature, architecture, and liturgical prayer (in its many cultural modalities). It will "perform" the Catholic Tradition rather than simply ask the subject to discern its veracity. Such a pedagogy will be contemplative, rather than immediately demanding ethical action. It will be embodied in concrete practices grounded in various cultures that shape habits and thus the imagination.

And in a real way, such an approach has not yet been tried by the Church in the 20th century. An introduction to catechetical theology as a liturgical-sacramental-aesthetic pedagogy is something that needs to be explored with students, who are themselves theologians in training.

That's the course that I will be teaching in three weeks. And it is indeed a theological exploration of what it means to perform a religious tradition for our own era. The work of developing this catechetical approach, one appropriate for our own era, is an intellectual task. It's not just about choosing the right textbooks or opening up classrooms. It's about developing a transformative Catholic pedagogy for our own age.

To hear more about how the Institute for Church Life is nourishing the Church's imagination and forming catechetical leaders for the Church, visit echo.nd.edu.