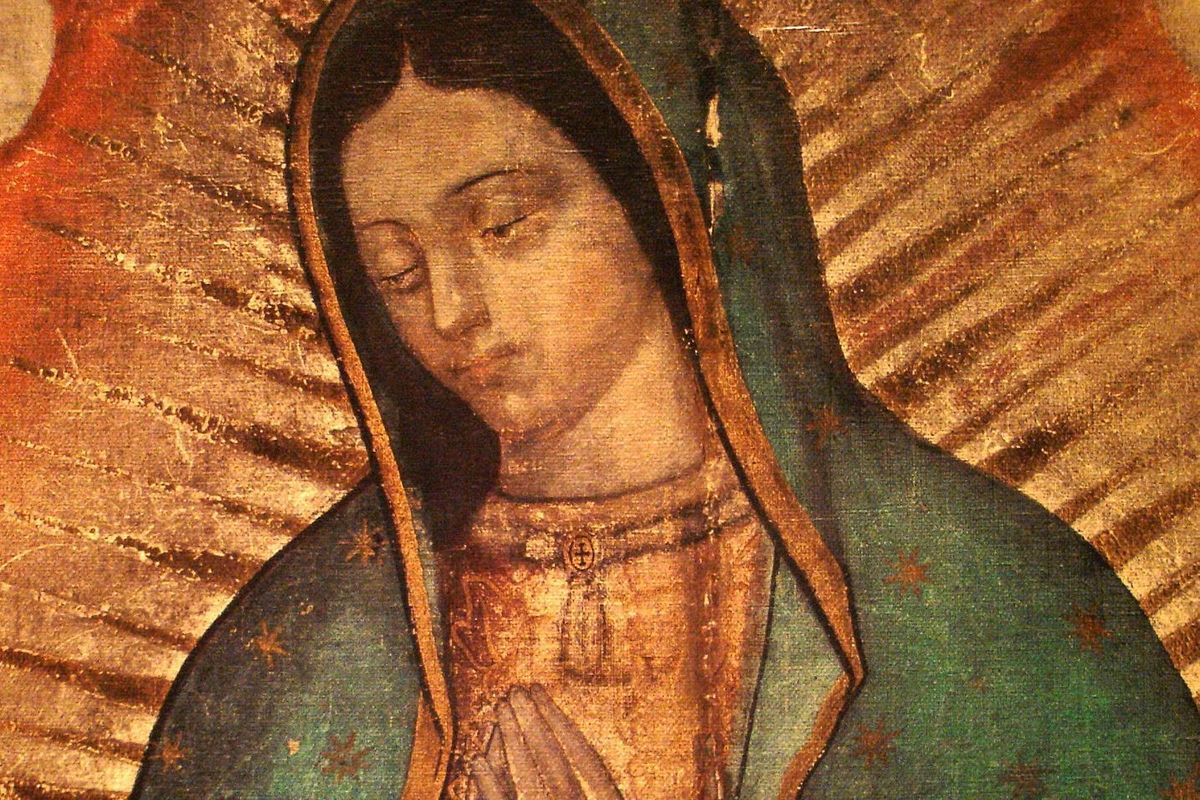 For some Christian people throughout the world, especially Mexican and Mexican-American Christians, December 12, of course, is the celebration of the Virgin Mary of Guadalupe. The feast commemorates her December 9–12, 1531 appearances to St. Juan Diego, the Náhuatl-Aztec who had recently converted to Christianity, whose own tilma or cloak bore—and continues to bear—the miraculous imprint of her image from when “the desert rejoiced and blossomed” (Is 35:1) at Mt. Tepeyac with Castillian roses blooming in December: the image of the Brown Virgin (La Morenita), the indigenous mestiza clothed with the sun and wearing the cinta, the band of pregnancy, standing on the moon, head bowed and hands folded in prayer, and born aloft by an angel of the Lord.

I would like to suggest that the Virgin of Guadalupe belongs in a particular way to our Advent preparations because, like Mary herself in her great New Testament hymn of God’s praise, the Magnificat, she proclaims to us the Gospel, the Good News of our salvation in Christ, the Good News of God who scatters the proud, exalts the lowly, fills the hungry with good things, and remembers his promises to Abraham and his children for ever. The great New Testament scholar, the late Raymond Brown, once wrote:

In the Indian tradition, when Mary appears in the ancient garb of the mother of the Indian gods, she promises to show forth love and compassion, defense and help to all the inhabitants of the land. Ten years before, the whole Indian nation, their gods and their tradition had been torn down. She hears their lamentations and remedies their miseries, their pains and their sufferings. In the devotion to the Lady, the Christian Gospel proclaims hope for the oppressed. . . . The Gospel of God’s Son means salvation for those who have nothing. I think that is exactly what happened in the case of Our Lady of Guadalupe. She gave the hope of the Gospel to a whole people who had no other reason to see good news in what came from Spain. In their lives the devotion to Our Lady constituted an authentic development of the Gospel of discipleship.[1]

We can celebrate the Virgin of Mary of Guadalupe, then, because in a special way she proclaims to us the Gospel!

A second reason why we celebrate Mary of Guadalupe is because her very face—which already blends European and indigenous American features—proclaims the multi-racial, multi-ethnic, multi-cultural, mestiza “Church” that came to be incarnated as the result of the sixteenth-century cultural confrontation between Spain and Mexico, and still struggles to be born in our own day. Both the person and the image of Mary of Guadalupe, we might say, function as a typus ecclesiae—a “type,” or “image,” or “model” of the Church.

Indeed, Mary of Guadalupe—this typus ecclesiae herself as pregnant with the Incarnate Word—can surely be seen as, in a mirror reflection, what the Church itself, what we ourselves (thanks also to God’s unmerited grace) are and are called to be: similarly “pregnant” with the Incarnate Word for the life and salvation of the world today. “The innermost core of the apparition,” writes Virgil Elizondo, “is what she carries within her womb: the new source and center of the new humanity that is about to be born. And that source and center is Christ as the light and life of the world.”[2] I believe, then, that Mary of Guadalupe as an image and model of the Church itself, may be one of the most profound gifts that Mexican and Mexican-American spirituality can make to the whole Church in our day.

For the Church being called into existence more than ever before is one called to be clearly multi-cultural and mestiza in form. To gaze contemplatively upon the image of Mary Guadalupe, then, is to gaze at the future Church in the making, and to gaze at what we hope, by God’s grace and Spirit, the Church of Jesus Christ, racially, culturally, and even ecumenically, will become.

How appropriate, then, that we celebrate Mary of Guadalupe in Advent. For what is Advent all about? On the official Roman Catholic (and contemporary Protestant) liturgical level, the season of Advent is primarily concerned with Christ’s coming again at the end of time and only secondarily with his first coming. That is, within the current three-year cycle of lectionary readings, those assigned to the first three Sundays of this season are all oriented toward the parousia or “second coming” of Christ in glory, and not to his first coming in Bethlehem at Christmas. The Advent call to “prepare the way of the Lord,” then, is a call more related to the Church’s own eschatological stance in the world as oriented in hope toward ultimate fulfillment in Christ when “he will come to judge the living and the dead” than it is to preparing for Jesus’ “Birthday.”

As such, Christmas becomes less a celebration of a past historical event (Christ’s birth) and more a kind of anticipated celebration of the parousia itself, a celebration of the fullness of redemption and our new “birth” by Baptism in the One whom the late Raymond Brown referred to as the “adult Christ at Christmas.”[3] In fact, it is only on the Fourth Sunday in Advent where the current readings themselves shift from a clearly eschatological to an incarnational or Christmas focus, with the Gospel pericopes of the Annunciation to Joseph (Mt 1:18–24), the Annunciation to Mary (Lk 1:26–38), and the Visitation of Mary to Elizabeth (Lk 1:39–45), read respectively in Years A, B, and C. But on a more popular level, we all know that Christmas is coming and that we will be celebrating Jesus’ birth. In fact, as Elizondo notes:

The entire complex of events at Tepeyac was as mysterious as it was ultimately real. The bishop was disconcerted and his household was disturbed, as theologians, liturgists, and catechists usually are with the ways of God’s poor. To this day, liturgists do not want to accept the feast of Our Lady of Guadalupe as the major feast of Advent. For them, it seems that God made a mistake in placing the feast of Guadalupe during Advent.[4]

Within most forms of popular religion and piety, whether Catholic or Protestant, Advent has always been and will continue to be decidedly incarnational in focus and closely related to the people and events surrounding the impending birth of Christ, in spite of what we liturgists and the official liturgy say about eschatology. And what is most interesting is that, in spite of what the Advent Sunday Gospel readings are, the readings for the December 8 Solemnity of the Immaculate Conception and now for the December 12 Feast of the Virgin of Guadalupe are, respectively, the Gospel readings of both the Annunciation of the angel to Mary and the Visitation of Mary to Elizabeth in annual proximity to the Second and Third Sundays of Advent already! In other words, this other incarnational focus has actually remained within Advent under different names and, as such, both already integrate Mary and the principal biblical texts associated with her into Advent itself.

The story and the image of Guadalupe are really about incarnation, about the word becoming flesh, the incarnation of the Gospel, the Good News of God’s salvation among us here in this land, and about who we are and who we are to become as Church in the world. Mary of Guadalupe, pregnant with the Incarnate Word about to be born, belongs to our Advent reflections because Mary belongs in a special way to Advent for the simple reason that her Son seeks always to be born anew in us. For she too—like John the Baptizer, who comes as God’s messenger to prepare the way before the Christ who is coming—also comes as God’s messenger, inviting us to give him a home in which to be born again among us this year and every year. But, as the “woman clothed with the sun,” Mary of Guadalupe also reflects the overall eschatological focus of Advent as well. She belongs in a special way to Advent, then, because she is able to hold together both orientations of the season, the incarnational and the eschatological.

Finally, on an ecumenical level where the popularity of Guadalupe continues to grow, former executive director of the Women of the Evangelical Lutheran Church in America, the Rev. Bonnie Jenson, draws attention to Mary of Guadalupe in the following manner:

I was deeply moved by the story of the poor man’s vision of the Lady of Guadalupe. I was struck by how lowly, insignificant people have to beg the church to regard them with the esteem with which God regards them . . . The poor and lowly often have to beg the church to proclaim and live out its message of a merciful, compassionate God! Behind the vision’s gilded cactus leaves, miraculous roses, and imprinted cloak is the longing for a God who comes, not in the might of military conquest, nor in the ecclesiastical forms and evangelism plans of a mighty church, but in simple compassionate respect and regard for the lowly, the hungry, the women, the poor, the children.[5]

Such is the gift and invitation of the mid-Advent feast of the Virgin of Guadalupe.

[3] See Raymond Brown’s delightful short commentaries on the Infancy Narratives of Matthew and Luke in An Adult Christ at Christmas (Collegeville: The Liturgical Press, 1978). 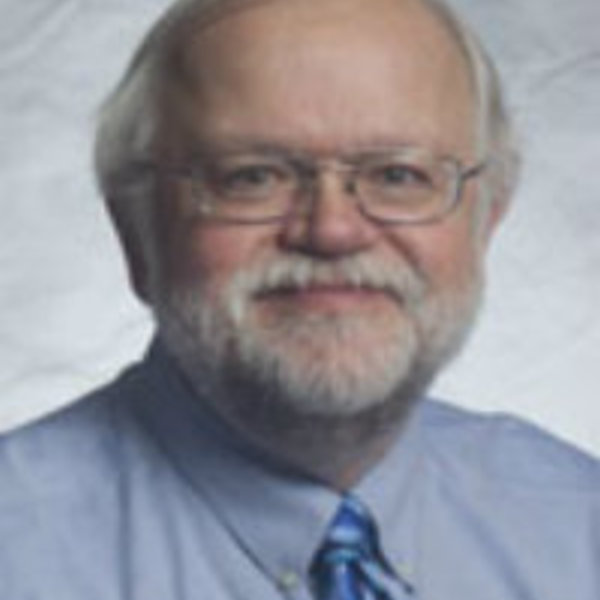 Maxwell E. Johnson is professor of liturgy at the University of Notre Dame. He has published two books on Our Lady of Guadalupe: The Virgin of Guadalupe: Theological Reflections of an Anglo-Lutheran Liturgist (Lanham, MD: Rowman and Littlefield, 2002), and American Magnificat: Protestants on Mary of Guadalupe (Collegeville: The Liturgical Press, 2010).

The Last Judgment Is the Reason for the Advent Season 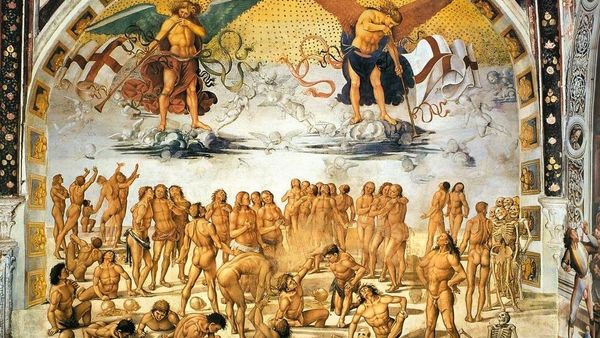