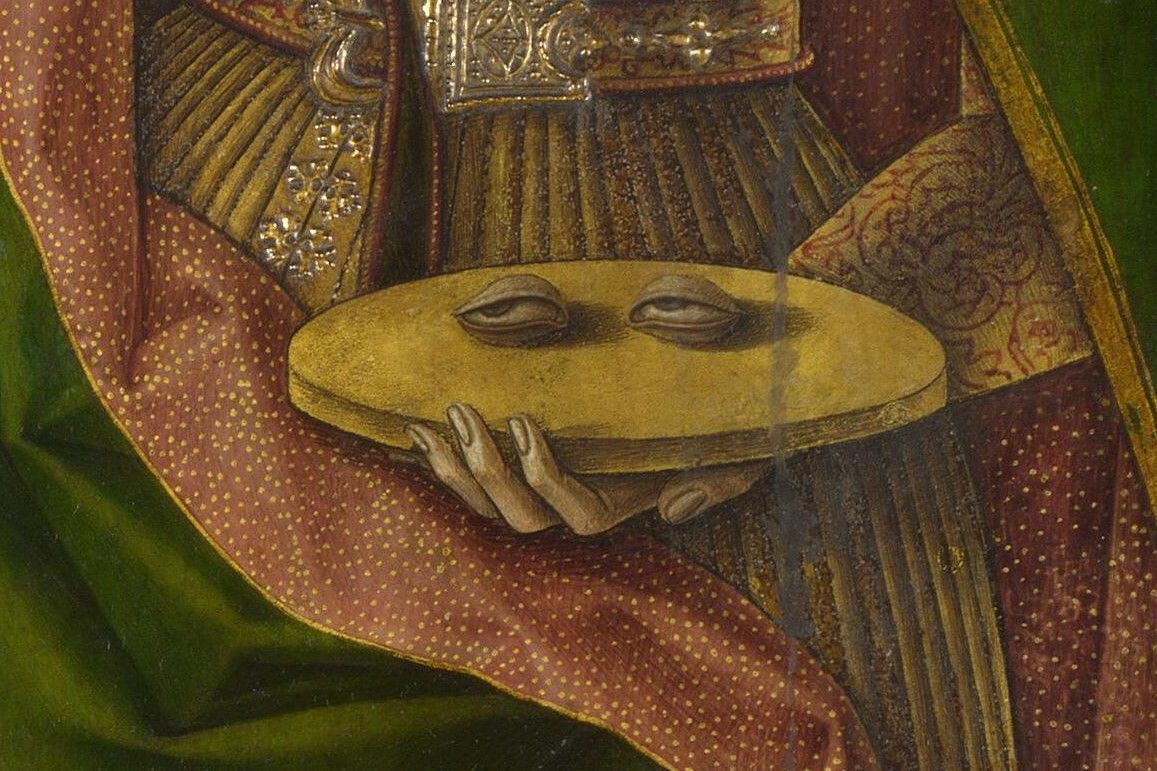 Today the Church celebrates the feast of St. Lucy, a third-century Sicilian girl who pledged her virginity to Christ and endured a martyr’s death when she refused to renounce her faith. Numerous versions of St. Lucy’s martyrdom are told: one version says that she miraculously became unmovable when a group of soldiers tried to drag her off to a brothel in order to violate her virginity. Another version relates that, when even a team of oxen couldn’t move Lucy, soldiers piled kindling around her and attempted to set it ablaze, but the wood could not be lit. Still another version states that the soldiers gouged out her eyes before beheading her (hence her symbol of eyes on a plate and her patronage of those suffering from blindness or other eye ailments). Of course, these varied versions are more the stuff of legend than of fact; however, at their core, they all present us with the witness of a courageous young woman who chose to suffer and die rather than betray her beloved spouse, Jesus.

In many European countries, this is a day of great festivity and celebration, a day when Lucy—whose name means “light”—continues to illuminate the darkness of one of the longest nights of the year.[*] In many Scandinavian countries in particular, St. Lucy’s Day is celebrated with a decadent breakfast in bed of pastries and coffee or hot chocolate, prepared and brought to family members by the eldest daughter of the household, who wears a white gown with a red sash and an evergreen wreath on her head, traditionally adorned with lighted candles.[†] This delicious (and, yes, slightly dangerous) tradition has its roots in another St. Lucy legend, which states that the saint herself wore such a wreath in order to free up her hands so that she could bring food at night to persecuted Christians hiding in the catacombs.

The celebration of St. Lucy’s Day includes traditional hymns (like the one in the video below), most of which are probably unfamiliar here in the United States; however, Awake! Awake, and Greet the New Morn is a well-known Advent hymn that would work beautifully for a St. Lucy’s Day celebration, whether in a home or in a parish. The tune has a joyful lilt, and not only is the first line perfect for waking up sleepy loved ones with breakfast in bed, but the rest of the text is also rich in imagery to delight the imagination—the line "the rising sun shall crown you with light" is especially apt when sung with St. Lucy’s particular witness to Christ in mind:

Awake! awake, and greet the new morn,
for angels herald its dawning.
Sing out your joy, for soon he is born,
behold! the Child of our longing.
Come as a baby weak and poor,
to bring all hearts together,
he opens wide the heav’nly door
and lives now inside us for ever.

To us, to all in sorrow and fear,
Emmanuel comes a-singing,
his humble song is quiet and near,
yet fills the earth with its ringing;
music to heal the broken soul
and hymns of loving kindness,
the thunder of his anthems [rolls]
to shatter all hatred and blindness.

In darkest night his coming shall be,
when all the world is despairing,
as morning light so quiet and free,
so warm and gentle and caring.
Then shall the mute break forth in song,
the lame shall leap in wonder,
the weak be raised above the strong,
and weapons be broken asunder.

Rejoice, rejoice, take heart in the night,
though dark the winter and cheerless,
the rising sun shall crown you with light,
be strong and loving and fearless.
Love be our song and love our prayer
and love our endless story,
may God fill ev’ry day we share
and bring us at last into glory.

[caption id="attachment_5632" align="alignright" width="440"] I baked this with my mom last night and, as the oldest daughter in my family (as well as the only daughter present), I served it to her this morning. This bread is delicious!![/caption]

In addition to traditional music, there are also traditional—and delectable—delicacies, the most popular of which is the Lussekatter (literally “St. Lucy’s Cats”): S-shaped rolls flavored with saffron and decorated with raisins. In my own preparations to celebrate St. Lucy’s Day, I opted for another recipe, courtesy of Catholic Cuisine: a glazed braided bread flavored with orange zest and cranberries, and decorated with candles in order to resemble the evergreen wreath. In her chapter on St. Lucy's Day in The Catholic Catalogue, Melissa Musick recommends poppy seed bread and includes her family’s favorite recipe.

While the season of Advent is of course one of great solemnity as we anticipate the coming of the Christ-Child, it is also a time of great festivity. Advent is not Lent, and it shouldn’t be observed as though it were. Traditional festivities like those associated with St. Nicholas’ Day (December 6) or yesterday's feast of Our Lady of Guadalupe or St. Lucy’s Day remind us that our time of waiting and preparation for the Messiah’s coming ought to one of joyous anticipation, even fun! So if you’re feeling super festive this St. Lucy's Day, break out the saffron and roll yourself some Lussekatter to share with family and friends over a cup of hot chocolate. Or if you’re pressed for time (and don’t want to spend $20 on saffron), pop open a store-bought canister of cinnamon rolls, throw them in the oven, and enjoy. Either way, remember that Advent is a season of joy, for “we await the blessed hope of the coming of our Savior, Jesus Christ.”

St. Lucy, illuminate the darkness of these long nights
and help us to look forward in joy-filled hope
to the coming of the radiant morning star,
the sun of justice that never sets,
the true light of the world, Jesus Christ. Amen.

[*] Before the current calendar, December 13 was once considered the winter solstice; thus, St. Lucy’s Day was a way of acknowledging that, from that point forward, the days would grow longer and Christ, the true Light of the world, was coming soon.

[†] Okay, I admit, this isn’t exactly the safest idea, which is why battery-operated candles are so handy. Then again, no one ever said festivity was necessarily safe—think about how much stuff we Americans set on fire on the Fourth of July! Many recent photos of St. Lucy’s Day celebrations (like the photo above) show a girl wearing the evergreen wreath with the traditional real candles, and it is indeed beautiful. But still. Safety first.