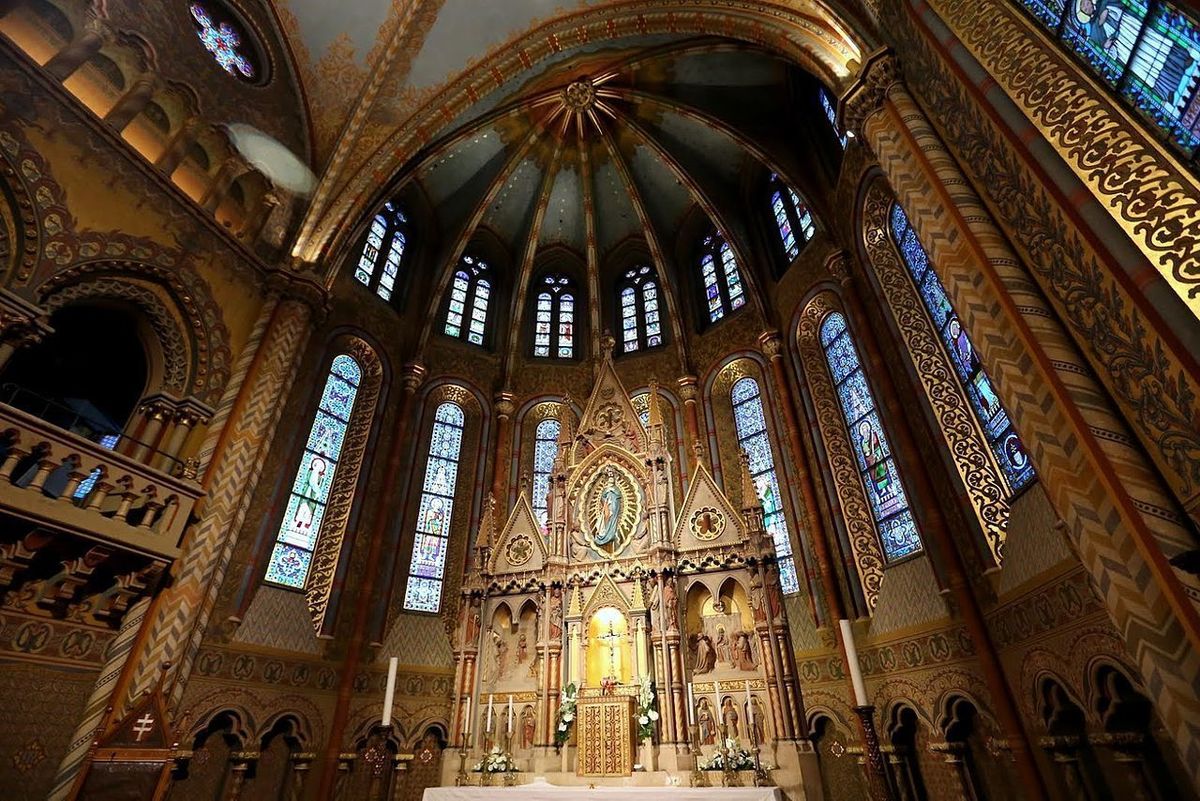 Last summer I went on a trip to Central Europe with some students and young adults from Salt Lake City and Seattle. We visited Germany, Austria, the Czech Republic, Hungary, and Croatia. We saw and prayed in churches of various styles: Romanesque, Gothic, Baroque, Neo-Gothic, and modern. During the whole trip I kept asking the students which church was their favorite. To my surprise, it was not the very well preserved Romanesque church in Ják in Hungary—which was both my favorite and the favorite of my fellow Dominican, Father Łukasz—nor any of the grandiose Gothic or Baroque churches. Instead, it was the Matthias Church. Even though this church’s origins go back to XIII century, its present form is late XIX century Neo-Gothic. It is a very beautiful church to be sure, but nothing breathtaking, or so I thought. Another interesting observation was that our young Americans did not much value the Baroque churches, or even disliked them. A similar sentiment was expressed by the young prior of the Dominican community in Vienna, Father Martin. He prefers more simple chapels, and in fact all the private chapels I have seen across our trip in our Dominican houses were very stark in comparison with extravagant Baroque main churches. I must admit that I myself am not a great admirer of the Baroque. That made me wonder: why so much apathy, even distaste, towards the Baroque?

[caption id="attachment_10822" align="alignnone" width="840"] Baroque: Prague, St. Ignatius Church [detail], Photo by: giggel; Source: Wikimedia, CC BY 3.0.[/caption]The Baroque style is very peculiar one: it means to overwhelm us visually with its richness. There is not much empty space in a Baroque church. Almost every square inch is covered with a painting, statue, or at least a relief. And therein lies the problem.

We live nowadays in a culture of sensory overload. We are constantly bombarded with our phone messages and flashing ads around us. When we enter a sacred space we seek something different. We seek silence, quietude, not only in sound, but also visually. We want to distinguish the sacrum from the profanum, we want our churches to be different from our shopping centers. The fact that the Baroque style was seeking the same thing is almost ironic. The Baroque wanted to depict the otherworldly, Heaven Itself, amid all the suffering and strife of Europe ravaged by early modern wars (the so-called “The Wars of Religion”).

Another reason that comes to my mind why Baroque did not make a great impact on our young Americans is its ties with what we broadly understand as imperialism. We could see that especially in Vienna, where almost every building displays the power and wealth of the Habsburg Empire. And that strikes too close to home because American architecture has a similar feel. It is there to impress, to show off the skills and the prowess of the nation that built it. It is not surprising that the first skyscraper was built in United States.

Moreover, I think the Baroque is not appreciated nowadays for its very specific taste. It seems to be quite literal—everything in Baroque is rather straightforward. The ceiling is Heaven and it is very often painted as such: the Trinity and the Blessed Virgin sit among the clouds with the angels and the saints. And for those angels—rather than the figures we know from the Scriptures: young, powerful individuals dressed in white—we instead have chubby little children infesting every nook and cranny (there are more than 300 of them in the Dominican church in Vienna). The generally grandiose style and the lack of seriousness of those putti, or even the elements of the macabre (like the Sedlec Ossuary chapel we visited in the Czech Republic) does not fit well with our contemporary spirituality.

In the end, the Baroque style tends to impress modern people mostly in a secular way: by the amount of work and money put into it; by the different materials used; or by those clever optic illusions employed; but not in a spiritual sense as something bringing us closer to God. It is not necessarily an inherent fault of the style—something similar could probably be said about all church styles across history. Certainly this was the fate of the Baroque’s predecessor, the Gothic style, as is evidenced by older Gothic churches getting baroqued in almost all the European countries after the Baroque style was born.

Partial-baroquing also contributes to the problem, since some parts of the churches remained Gothic. This creates a mash-up of two styles that are very different. The unity of structure and symbolism is broken, something exacerbated further by modernist additions. Such a church, with many styles within it, looks more like a museum than a worship space. That could be the reason why Matthias Church was a favorite for many students: its uniform structure and form contributes to a feeling of wholeness and beauty.

Pondering old styles made me think of the state of church art today. The modern art of 60’s, 70’s, and 80’s testifies to this desire for simpler, more practical, sacred spaces. The term “noble simplicity” became the ideal for church art during those times. And yet the young people I know feel lost and alien in those modern worship spaces. What went wrong? Is it just the case of more rapid change of tastes and needs in styles? Or, maybe there is some inherent problem to modern church art and design?

In form and decoration, it seems that the distinction between the sacrum and the profanum was abandoned in modern church buildings. Churches became very similar in shape and décor to secular buildings. The same styles were used, the same architects were employed—architects who sometimes were atheists or non-believers without much understanding of what a sacred space is meant to be. Seeing the interior of a church adorned with quite abstract modern or postmodern art is too similar to what we can see in art galleries or even city parks and squares. This abstraction is hard to understand, because its symbolism quite often is obscure and accessible only to isolated islands of art connoisseurs. Paired with a culture that fills our lives with cheap, mass produced, plastic, and very often banal artifacts, the whole situation kindles in the younger generation a yearning for something different.

Reflecting on what has been successful in my own ministry has given me some insight about church art and worship spaces. I discovered that one of the most profound and life-changing devotions among young people is the Adoration of the Blessed Sacrament. We can celebrate the Adoration in many ways, but the one that most “speaks” to the people I have served for the last five years is a full proper exposition with benediction and incense. The intricate design of the monstrance helps us to understand the preciousness of what it contains as the wrapping is never more important than the gift itself. Together with the elaborateness of the vestments of the priest or deacon, the smoke and smell of the incense we can sense the mystery and other-worldliness of God. In order to make those signs most striking and visible, we would dim the lights in the church and leave one main light on the monstrance to focus on what is most important. We “reduce” the whole church interior to the altar and the monstrance. We want to make it simple and focused.

Experiences like these make me wonder if what young people yearn for is something elaborate yet authentic; something that is truly a piece of art; something that needs hand-crafting and expensive materials; something that points beyond our everyday life; something rich in symbols; but also something that links us with the past, with tradition; something that can show us our roots. It is not a surprise why in our late modern times the stained glass and icons of the East have become prized and popular, as they match most of that yearning.

Yet, the true piece of art, a true manifestation of beauty, needs a proper background, background that will highlight it and enable us to appreciate it. A simple background. The idea of noble simplicity comes back, but with a new meaning. This marriage of a beautiful and elaborate piece of art (an icon, a golden tabernacle, an intricate altar) with simple surroundings gives us a space of quietness and silence where we can focus on the beautiful, and through it on what is most important: God.

I am not advocating against elaborate church art. Matthias Church in Budapest, so prized by my students, is not in any way simple. I am advocating for the need of much deeper theological consideration of the structure and symbols to be used in modern churches. The reality very often is that building a new church is ruled by a somewhat tight budget, which forces certain solutions based upon what we can do rather than what we should do. What I advocate is that the simplicity of churches should be considered and integrated into the theological message of the art, not just an outcome of small funds. The latter very often results in white walls that remind us more of a school or hospital, rather than worship space.

This consideration of how to highlight sacred beauty amid an uncluttered background needs more effort from both particular and universal Churches. I am not speaking about various liturgical commissions, as they very often failed in their duty of preserving the sacredness of church art. It needs deeper thought and a different approach to church art altogether.

However, if we are unwilling to make that effort, then we might miss the very longing for God experienced in the hearts of the faithful echoing in our churches. 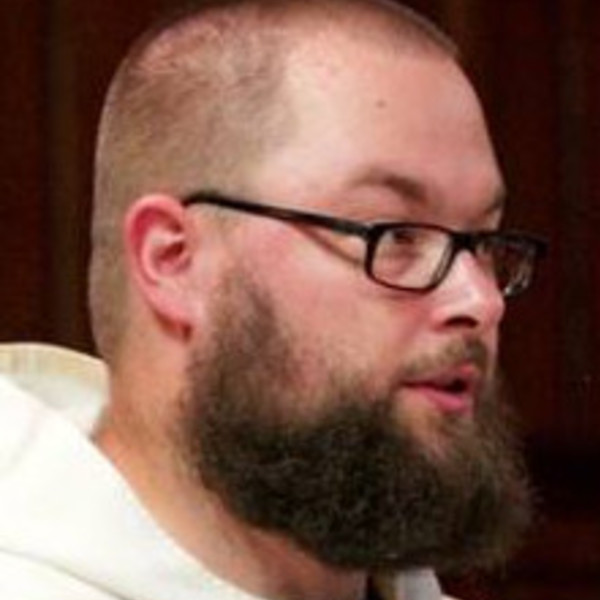 Fr. Marcin Szymański, O.P., is a Polish Dominican serving as Director of Religious Education at the Saint Catherine of Siena Newman Center and Parish in Salt Lake City, Utah.