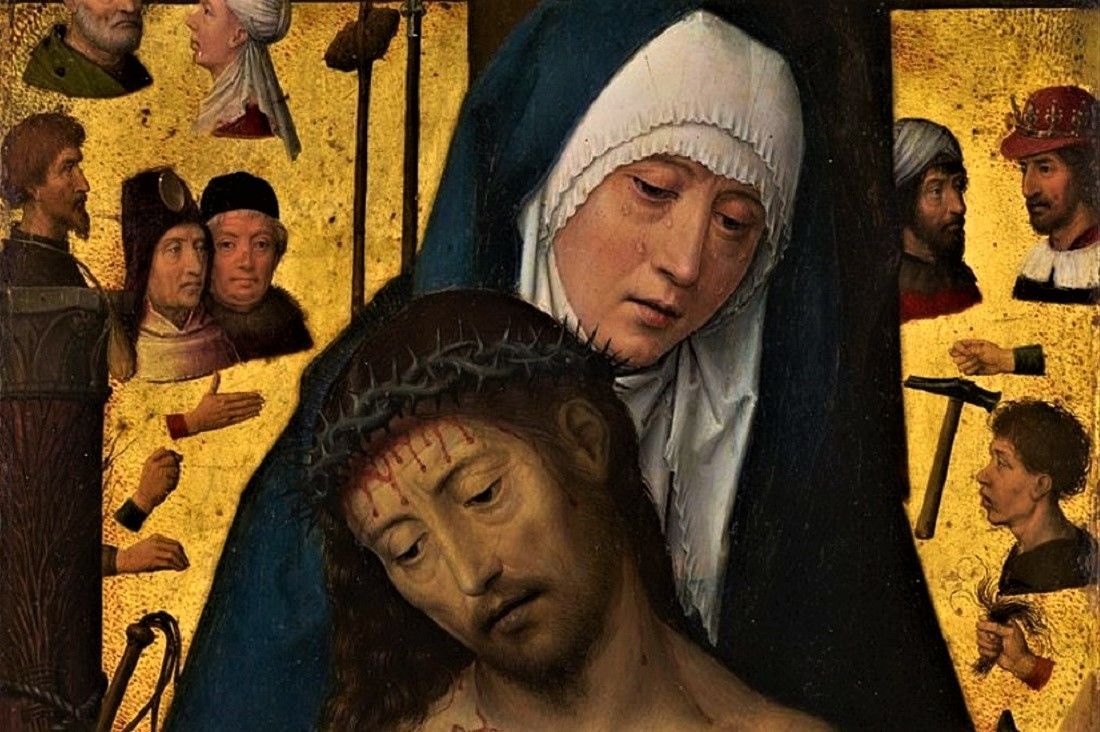 This seismic shift in the orientation of creation, this cataclysmic re-location of the logos into the corruptible world of mortality took place not in a hermetically-sealed scientific laboratory or in the archetypes of myth, but in the flesh-and-blood of a human person. And the person’s name was Mary.

When imagining Incarnation—in both our intellectual and pious imaginaries—we too often recite a story something like this: notional God theoretically unites to abstract human nature. The story is more like a mathematical formula. 1 + 1 = 2, and Incarnation remains simply a more subtle cosmic algebraic formula in which 1+1 = 1. But this is not what it is to be or to take up flesh. To become a human person means to be born: a physical, messy, risky business. To be born means to be thrown into the world drama in a specific time (e.g., 1991, the Renaissance, 4 BCE) and a specific place (e.g., Newark, the American Southwest, Edina Children’s Hospital). This comedy of irrupting into particularity has been true for every human being throughout time and space, and the birth of God was no exception. To take up flesh, or pitch one’s tent among, meant and means taking up the facts of living shared by the other members of the chosen or choosing ontological community. Thus, to this commonplace indignity of birth into contingency the divine person submitted himself. The Word became flesh, meaning not just a conceptual sharing in a substance or noetic nature, but descending into a heart which beat faster in fear or in love, protected by the delicate rib-cage tabernacle of an oh-so-destructible body.

Concepts are manufactured by human minds for human manipulation. But persons are, to loan a phrase from Rowan Williams, “utterly resistant to the self.”[1] To encounter a person is to encounter a world populated with not simply extensions of our own ego or projections of our thought, but radically other beings, who offer the real possibility of communion—i.e., union with that which is intimately not-I.

Enter Mary. Miriam of Nazareth is the locus of the Word’s silent enfleshment, the first human being who, completely other to God and capable of resistance, offers not resistance but sheer availability. Her availability is not to an idea, a principle, or power but to a person—the personal Word of God who speaks to her, within her and ultimately through her. The mysterious figure of Miriam of Nazareth is a symbol of the personal in the midst of the story of universal salvation: a reminder of the scandalous particularity of God’s entrance into history. The fact of her personal, historical reality boldly resists our proclivities to spiritualize or mythopoeicize an embarrassingly historical faith.

Mary herself, however, can be the subject of intense myth-making and spiritualization. The piety which surrounds Mary often scandalizes and discomfits. One summer, I lived across the alley from the Missionaries of Charity Motherhouse in Kolkata. Each morning, we would rise with the tropic sun to attend Mass, whose trailing coda of requisite prayers consistently concluded with an invocation to the Immaculate Heart of Mary, addressed by the community as, “Cause of Our Joy.” To punctute their prayer, a procession of Missionaries of Charity and sundry mass-goers would kiss the hands and feet of the Immaculate Conception in the chapel, as they departed. Their sincere and foreign devotions cast this overly familiar figure from my childhood nativity plays and colorful illustrations of children’s Bibles in a strange new light. Why did they love Mary so much, and why with such visceral devotion?

Too much exposure to Marian devotion can make sophisticated intellectual sensibilities squirm. Reading St. Louis de Montfort’s Treatise on True Devotion to the Blessed Virgin is another entree into the outré world of fervent Marian devotion. Here, on the borders of rational faith, lines such as: “Mary has authority over the angels and the blessed in heaven”[2] have little to say to the pervasive skepticism which guides our quotidian operations. Without mincing his words, De Montfort’s practice of devotion commands fealty to Mary, and calls upon his readers to submit themselves to offer up their freedom to her. Devotion takes place at the level of the will, deep in the human heart, below the level of psyche or intellect, where the binding and loosing take place. To offer devotion to Mary is to assent, at the deepest level of decision, to who and what she is—that is, the baffling particularity and personal container of Incarnation. To submit oneself in a strange devotion to the Theotokos is to re-form oneself in the fundamental relationality of the faith which claims the divine has descended into dangerous intimacy with one person, and through her to all humans.

De Montfort’s overweening praise of this person of Mary captures the startlingly personal nature of faith as an encounter of relationship. Relationship draws us from the sphere of the known quantity (the self) and demands we risk the stagnant safety of the known to encounter the dynamic unknown (the other). Our encounter with God is never an encounter with the abstract, but is rather an encounter with a person who demands we risk all that we have to find life in what is both resistant and intimately near to our own self. To borrow words from another resident of Lambeth Palace: “Prayer begins with an encounter with a person: an opening of ourselves to be with the person who is three persons in one: God.”[3] Prayer is not a mental exercise. Prayer is a lived reminder that the effort of faith is not the effort of intellectual exertion, but the ascetic offering of our own availability to the will of an other who is a person. Prayer is not maneuvering or manipulation, but relationship.

Devotion to Mary à la Louis de Montfort offers more than simply facile pious practice, rather, devotion to Mary can, like the faithful risk of prayer, lead to the core of Christian faith—encounter with a person. Devotion to Mary means taking up the shape of Mary’s life, that is, in the contemplation of the Word of God, our lives become transformed through the personal encounter with the Word who is radically other than ourselves. When approached through the person of Mary, the Word is revealed not as a language we can master, discourse we can use, abuse or subordinate to our own thought. Rather, to encounter the Word through the avenue of the person who gave him flesh is to meet the Word revealed as person, available for relationship. Contemplation of the Word occurs for us, like Mary, within our own hearts. And contemplation must necessarily bear fruit through the incarnation of the Word into the public shape of our lives. Thus, through following the form of Mary’s contemplation, our lives are shaped into the single history of the Word becoming flesh in our own hearts, vulnerable to fear and love, pounding the quiet song of communion within our own oh-so-corruptible bodies.

Featured Image: Hans Memling, The Man of Sorrows in the arms of the Virgin. 1475; Source: Wikimedia, PD-Old-100.