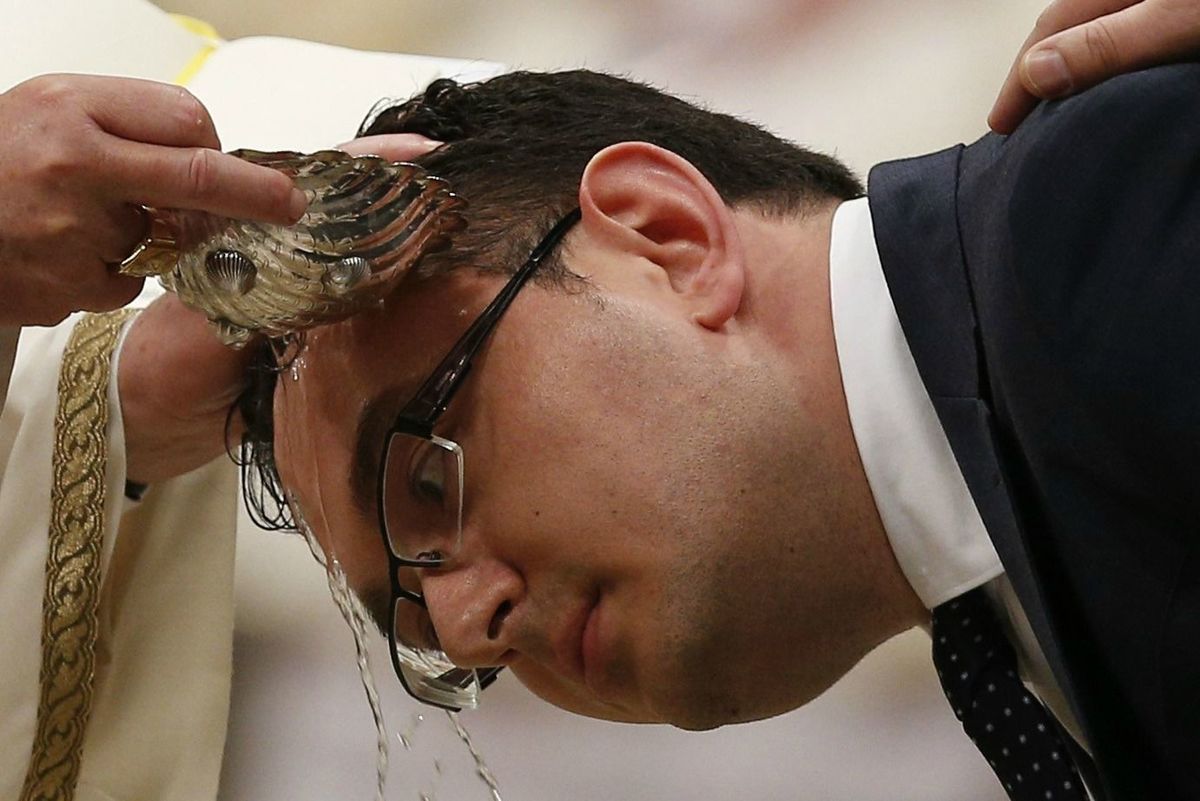 We begin and conclude Mass with this simple and profound prayer. But have we really thought about what it means to make the “sign of the cross”?

Let’s start with the obvious. The “sign of the cross” is made by saying the Trinitarian invocation while touching one’s right hand to the forehead first (Father), then to the lower chest or stomach (Son), then to the left shoulder and the right shoulder (Holy Spirit), and closing with both our hands together for assent (Amen). Are these physical actions just arbitrarily chosen, or do they signify something? Why do we touch the forehead when we mean God the Father? Why do we touch our chest when mean God the Son? And why do we touch our shoulders when we mean the God the Holy Spirit?

The Church fathers actually interpreted each of these actions to mean something. For them, the forehead symbolizes heaven, the stomach the earth, and the shoulders as a place and sign of power. In making the sign of the cross, moreover, the person is affirming faith in the Incarnation and the Trinity, which are fundamental tenets of Christianity. In bringing one’s hand from the forehead down to the lower chest or stomach, one is remembering the reality of the Incarnation – God came “down” from heaven to earth; God became human in Jesus. The Trinity is also symbolized in the threefold nature of the one act, with the hand crossing over the two shoulders symbolizing the procession of the Holy Spirit between the Father and the Son (the filioque for Catholics). In Eastern Orthodox and Catholic churches, the sign of the cross is usually made with the tips of the first three fingers brought together and the last two against the palm. The first three represent the Trinity, while the last two represent the two natures of Jesus – divine and human. In Western Catholic churches, the sign of the cross is usually made with an open hand, each of the five fingers representing the five wounds of Christ. Thus, we also remember Christ’s suffering and passion, as well as his victory over sin and death.

What makes the “sign of the cross” a sign? At its core, the “sign of the cross” is a marker of Christian identity into which we are initiated at our baptism. We are baptized “in the name of the Father, and of the Son, and of the Holy Spirit, Amen.” Our bodies are formed in the sign of the cross, and so we become cruciform people. The human body becomes a locus for revelation of Christian identity, both to the believer and to the onlooker. This sign is not just ritual performance but active participation in the narrative of salvation enacted in the liturgy. In continuously making this marker of identity on our bodies, we are formed in self-gift, the ultimate act of which we celebrate at Mass. We offer ourselves in liturgical prayer, participating in Christ’s kenotic act and making meaning of our existence in light of the Incarnation.

In continuously marking one’s identity with this sign, it cultivates in the person a disposition to cooperate with God’s grace. There is a greater reality beyond the movement, which the movement itself points toward. There is a “crossing of the visible” that takes place in the act. In making the “sign of the cross,” the individual self and any onlookers recognize that the movement has a distinctive meaning that goes beyond the visible sign to an invisible reality, and that invisible reality of God’s love and grace is what we as believers attest to in our physical bodies when we perform the “sign of the cross.” It is a reminder of our baptism, it is a profession of our faith, it is our recognition of our trinitarian image, and it is the salvific mystery in which we participate.

The aesthetics of the sign itself also lead us more deeply into the mystery of the prayer. In aesthetics, what makes a movement beautiful is when the movement is perfectly oriented towards its end. In the sign of the cross, God is the beginning and the end of the movement, and we are the locus of that movement. The theological and aesthetic nature of performing the sign of the cross is a participatory form of knowing made especially manifest in the liturgy. The “sign of the cross” is a prayer because it constitutes an offering of the whole human being to the mystery of Trinitarian love.

Think of it as this: In the name of the Father, in the name of the Son, and in the name of the Holy Spirit, Amen = YES, I do this in God’s name! I do this because I believe in the saving power and endless love of God. To glorify the name of God, to give thanks to the great I AM is the intention of this prayer with which we begin Mass, which is an act of praise and thanksgiving to God. We become the name of God, who is love, and this is our vocation as human beings. We are meant to enter into divine life with God. Our bodies practice and live this vocation each time we make the sign of the cross, and this Christian identity is inscribed on us ever more deeply each time. Our bodies become trinitarian; we practice participation in God’s divine life. Love is imprinted on our bodies, and we become vessels of self-gift in the world. We perform this sign, and we become “signs” of God’s love.