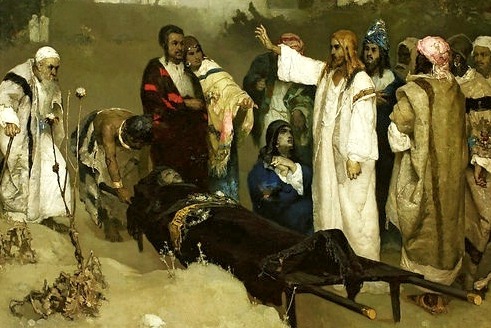 During the Jubilee Year, we have often heard the word ‘mercy.’ Every time I hear it, I think about its Latin equivalent: misericordia. The literal sense of this word is the movement of the heart toward pity. The misery of the heart that causes us to reach out in love.

In this Sunday’s Gospel, we encounter the merciful heart of Jesus. He enters the city of Nain in Galilee. He encounters a widow whose only son has died. This woman would have no income to support her, depending entirely upon the mercy of those she met. And here, she meets the giver of all mercy, Jesus.

There is another subtle reference in this parable to Elijah. As the Old Testament reading for this Sunday described, the prophet Elijah also raised the only son of a widow from the dead. The Gospel of Luke makes clear that Jesus is the great prophet of God, come to announce glad tidings to the poor. To dispense mercy.

Let us not turn our eyes away from the compassion that Jesus has on this widow: “When the Lord saw her, he was moved with pity for her and said to her, ‘Do not weep’” (Lk 7:13). The work used for pity in Greek is splanchnizomai, an inward movement of the “guts.” The guts here are source of compassion. It is akin to our word heart.

Jesus looks at the suffering of the widow of Nain and is moved. The Word made flesh cares for us. He has pity on us. And his mercy is not remote or distant. It moves the God-man, Jesus, to reach out and raise her son from the dead: “‘Young man, I tell you, arise!’” (Lk 7:14).

Jesus Christ, raised from the dead, ascended into heaven, is still moved to mercy for us. His heart is moved when he looks upon then Saul, persecuting his Body, the Church. He doesn’t just stop him. He says to him, “Young man, I tell you, arise!” Arise from sin. Arise from death. And arise to my Gospel of peace.

And the Gospel that we preach is now one of compassion, of pity, of mercy. The Year of Mercy is simply another way of saying that it is the year of the Gospel.

It is the year in which the Church listens to the voice of the poor and comes to share with them the good news of divine hospitality. Arise from the dead.

It is the year in which we preach the Gospel to young women and men, telling them the good news that happiness isn’t about how much money they make, how much success they earn. It’s about love unto the end. Arise from the dead.

It is the year in which we meet the prisoner and encounter them precisely as a person created in the image and likeness of God. Arise from the dead.

It is the year in which we encounter the woman trapped in an abusive relationship and promise her the support of the parish to protect and care for her. Arise from the dead.

It is the year in which we say to the sinner, to you and to me, that God’s love can pierce through our stony hearts, giving us a fleshy heart of love. Arise from the dead.

This article originally appeared in Our Sunday Visitor: Newsweekly on May 25, 2016 and is reproduced here with the permission of the publisher.