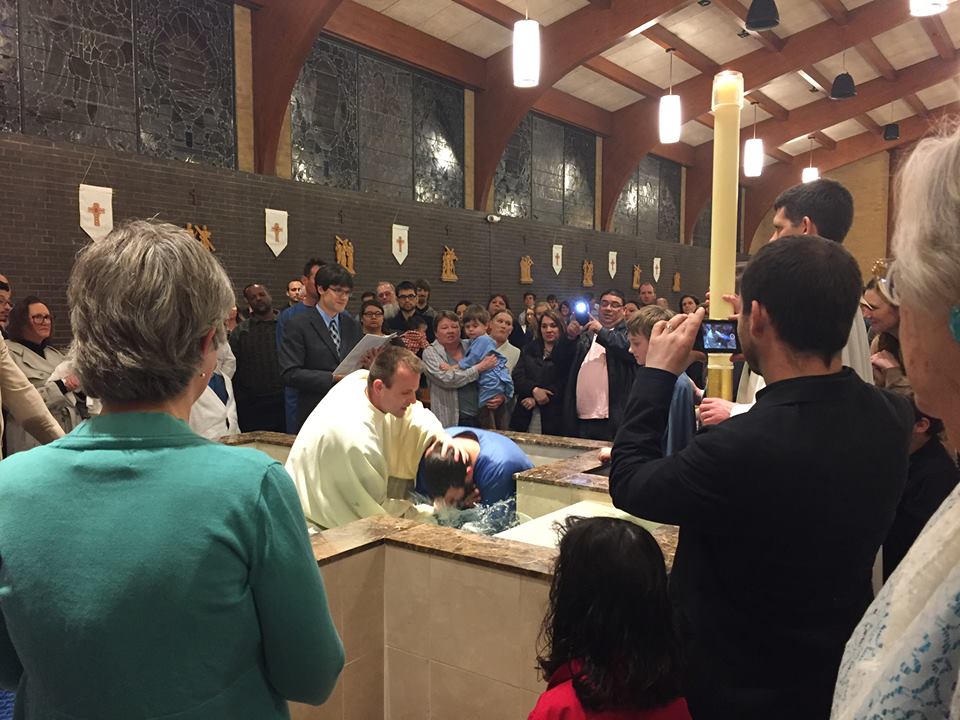 At the parish Easter Vigil, on that night when earth is wedded to heaven, nineteen people were baptized. Their stories, their lives, their very persons are now fully knit into Christ's own life.

Christ, who rose from the dead so that all of us might become sons and daughters of the triune God.

Christ, who even now calls all members of the Church, his Body, toward redemption.

Christ, who added hundreds of thousands last night to the communion of saints.

Christ, whose body is marked by wounds of love. Forever.

Christ is risen. He is truly risen. Forever.

The redemption of the world, the renewal of the peaceable kingdom, where praise rather than violence shall be the defining discourse of all humanity--it is here in figure. It is here in truth.

A new crop of saints have joined us to sing our victory hymn.

And now we long, we watch for the day, when all shall join around the altar of the Lamb of God, who takes away the sins of the world.

Who takes away our sins.

Who takes away all sin.

And our risen Lord gives back to us a world transformed in love.

A world that we transform in love.

A world of love transformed.

A world made new in love.

Yet, love has won.

Violence will not win the victor's crown.

Power will not win the victor's crown.

Death has not won the victor's crown.

The man inflicted by violence. The powerless man. The dead man. He has won the crown.

He has trampled down death by death.

He who died because of us.

He who is no longer dead for us.

He who rose for us.

Who won for us. A victor's crown.

Let us wear the victor's crown.

Let us die to violence, die to power, die to death.

And live to hope.

Long to wear the victor's crown.

It is now our crown.

Let all of us wear the crown.