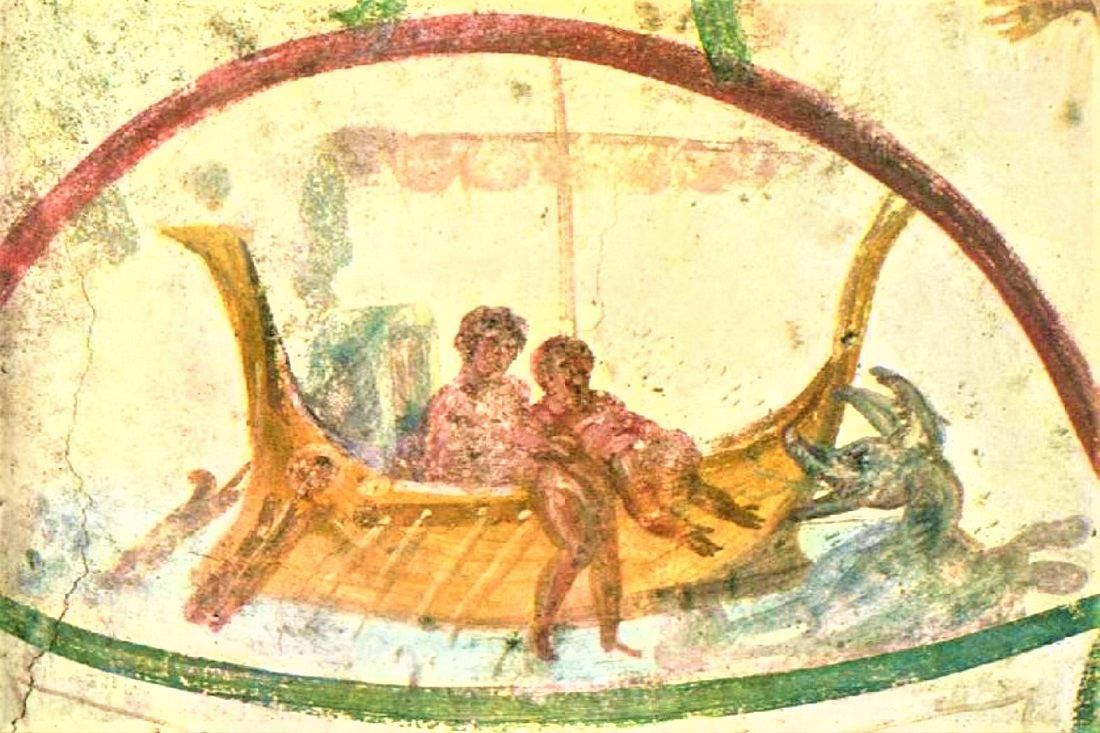 “Where do we go from here? Today we are experiencing not just a crisis of sacred art, but a crisis of art in general of unprecedented proportions,”[1] notes Cardinal Ratzinger, in the chapter “The Question of Images” of his three-volume work The Spirit of the Liturgy. There he examines the contemporary crisis of art through a detailed history of the image and the icon. He invites us to remember the purpose of Christian art, and of art in general, by looking back at the liturgical and mystical power of early Christian visual exegesis.

Our earliest dated examples of Christian art are from the third century, and they are mostly found in funerary contexts, particularly in the frescoes in the Roman catacombs. These images:

Simply take up and develop the canon of images already established by the synagogue, while giving it a new modality of presence. The individual events are now ordered toward the Christian sacraments and to Christ himself. Noah’s ark and the crossing of the Red Sea now point to Baptism. The sacrifice of Isaac and the meal of the three angels with Abraham speak of Christ’s Sacrifice and the Eucharist. Shining through the rescue of the three young men from the fiery furnace and of Daniel from the lion’s den, we see Christ’s Resurrection and our own.[2]

The images, situated in a specifically Christian context, conferred a meaning much more powerful than simple storytelling. In early Christian exegesis, the Bible began to be understood as a unified whole, centered on Christ and his salvation of mankind. Old Testament stories of salvation, such as the Sacrifice of Isaac, Noah’s Ark, Moses and the Red Sea, Jonah and the Great Fish, Daniel in the Lions’ Den, Susanna Falsely Accused, and the Three Youths in the Fiery Furnace all allegorically pointed to death and resurrection, both particularly (Christ’s), and universally (our own), as Ratzinger rightly points out. Christian art and exegesis both encompassed and transcended scriptural history and literal narratives:

The point of the images is not to tell a story about something in the past, but to incorporate the events of history into the sacrament. In past history Christ with His sacraments is on His way through the ages. We are taken into the events. The events themselves transcend the passing of time and become present in our midst through the sacramental action of the Church.[3]

The story of Jonah was widely understood to refer to Christ, due in large part to allusions in the Gospels. In Matthew 12:40, Jesus says, “For just as Jonah was three days and three nights in the belly of the great fish, so will the Son of Man be three days and three nights in the heart of the earth.” This connection was taken up with fervor in early Christian communities, where the story of Jonah appeared more than ten times as often as any other figure in early Christian art, apart from the Good Shepherd.[4] Depictions of the story of Jonah, which often share the same sequence of three scenes, were chosen for a specific, if complex, interpretation of the narrative. There is no explicit reference to Jonah’s prophetic mission—whether his calling by God, his flight from it, his eventual acceptance of God’s call and his preaching in Nineveh, or his disappointment and frustration with God’s mercy towards the Ninevites. Instead, the first scene shows Jonah being thrown overboard to the big fish, the second depicts Jonah being spit out of the fish’s mouth, and in the third Jonah appears lying peacefully on the ground beneath the gourd vine.

The allegorical interpretation by Jesus in Matthew 12:40 signified to Christians the importance of Jonah as an allegory for and a prophecy of Christ’s death and resurrection. In its funerary context, the image would extend further to signify the death and resurrection of the faithful, who hoped for salvation from sin and death, and looked forward to a new life in paradise, just as Jonah was rescued from the fish before reclining under the vine. The connection between sin, death, and salvation in the story of Jonah was made by many Christian thinkers, such as St. Irenaeus, who writes:

So also, from the beginning, did God permit man to be swallowed up by the great whale, who was the author of transgression, not that he should perish altogether when so engulfed; but, arranging and preparing the plan of salvation, which was accomplished by the Word, through the sign of Jonah . . . [This was done] that man, receiving an unhoped-for salvation from God, might rise from the dead, and glorify God, and repeat that word which was uttered in prophecy by Jonah: “I cried by reason of my affliction to the Lord my God, and He heard me out of the belly of hell.”[5]

Akin to this understanding, the connection between Jonah and baptism is also quite strong, as Robin Jensen remarks: “Since Christian baptism is itself a symbol of Jesus’ passion, death, and resurrection, the baptismal connection would be logical even without the added detail of water—water into which Jonah is tossed and the initiate is immersed.”[6]

Gospel narratives, such as the Miracle of the Loaves and Fishes, the Last Supper, and the Raising of Lazarus were also typical of early Christian art, and suggested the healing and saving power of Christ especially via the Eucharist and the Resurrection. Other significant stories from the life of Christ are conspicuously missing, however, such as Christ’s Passion, which does not appear until later in the fourth century. What this tells us is not that the Passion and death of Christ were unimportant to early Christians, but rather that early Christians were less concerned with literal retellings of the Gospel stories and more concerned with the figurative and spiritual meanings that Scripture as a whole conveyed, particularly as it pertained to the death, life, and salvation of Christians themselves. According to Ratzinger:

None of the early images attempts to give us anything like a portrait of Christ. Instead, Christ is shown in His significance, in “allegorical” images for example, as the true philosopher instructing us in the art of living and dying. He appears as the great teacher, but above all in the form of the shepherd.[7]

The Good Shepherd linked Christ with the shepherd figures found throughout the Old Testament and the messianic writings of the prophets (such as Isaiah 40:11). In his own words, Christ proclaimed himself to be the Good Shepherd, and the door through which his sheep enter and are saved (John 10). The significance of the Good Shepherd type is universalized through the Apostles, when Jesus tells Peter, “Feed my sheep” (John 21:15-19). The image also recalls Christ’s sacrifice as the “Lamb of God,” and calls Christ’s followers to imitate him and be themselves like lambs. Ratzinger draws out the significance of the Good Shepherd motif further, observing that:

The reason why this image, which is derived from Sacred Scripture, became so precious to early Christianity is that the shepherd was regarded as an allegory of the Logos. The Logos, through whom all things were made, who bears within Himself, so to speak, the archetypes of all existing things, is the guardian of creation. In the Incarnation he takes the lost sheep, human nature, humanity as a whole, onto His shoulders and carries it home. The image of the shepherd thus sums up the whole of salvation history: God’s entry into history, the Incarnation, the pursuit of the lost sheep and the homeward path into the Church of the Jews and Gentiles.[8]

Early Christian art was essentially sacramental, simultaneously expressing both the history and materiality of scriptural narratives and themes as well as their eternal and transcendent meanings. Not only did images refer to the sacraments as though from a distance; they also artistically represented them, and “in pointing to the sacraments, [the sacraments] are contained within them.”[9] Christ the eternal Logos was understood to be mystically present in the Old Testament events of divine revelation and salvation; He is, after all, the Word, who “was in the beginning with God,” and “All things were made through him” (John 1:2-3). A sacramental, even incarnational, understanding of the Old Testament is expressed in 1 Corinthians 10, where Paul informs his listeners:

Both baptism and the Eucharist are present to the Israelites in the desert, especially through “the spiritual Rock,” which did not simply symbolize Christ, but “was Christ.”

Scriptural exegesis relied on the presence and activity of the eternal and omniscient God in history; the “figurative sense” of Scripture depended on the purposeful designs of God to draw that history toward its culmination and fulfillment in Christ. The Sacrifice of Isaac in early Christian art is a poignant example of this kind of historical omnipresence, as it were, of the significance of Christ. Christ was necessarily present at the Sacrifice of Isaac because Christ was present from the beginning. So too was the mystery of his sacrifice present in the Sacrifice of Isaac: in the obedience of the father (to God) and the son (to the father), in Isaac’s miraculous salvation, and in his replacement offering (the ram provided by God). All of these elements and more were interpreted Christocentrically. The Sacrifice of Isaac was certainly a prophetic sign of Christ’s sacrifice, as it historically preceded it.

And yet, the Sacrifice of Isaac is more than an event of the past—it is living and eternal; it contains the transcendent mystery of the Eucharist itself. For the early Christians, the fullness of the mystery of the sacraments was present throughout the scriptures in just the same way that the mystery of the sacraments was present to them in their own lives. For Ratzinger, the images of the early Church “have the character of mysteries, going far beyond the didactic function of telling the stories of the Bible.”[10] There was no “break” from the past, rather:

The centering of all history in Christ is both the liturgical transmission of that history and the expression of a new experience of time, in which past, present, and future make contact, because they have been inserted into the presence of the risen Lord.[11]

Early Christian art pointed always to the mystery of Christ—past, present, and future in a unified whole. It was profoundly meaningful and alive in ways that are likely to be lost on the modern viewer, because there is relatively little of this kind of transcendent unity behind modern artistic expression. According to Ratzinger:

The crisis of art for its part is a symptom of the crisis of man’s very existence. The immense growth in man’s mastery of the material world has left him blind to the questions of life’s meaning that transcend the material world. We might almost call it a blindness of the spirit. The questions of how we ought to live, how we can overcome  death, whether existence has a purpose and what it is—to all these questions there is no longer a common answer.[12]

And so, we return to Ratzinger’s question: “Where do we go from here?” The answer is ongoing, of course, as we return again and again to the liturgy and to the contemplation of sacred mysteries. The answer is also to remember, and to return ad fontes; in short, to the catacombs—where “history becomes sacrament in Christ, who is that source of the Sacraments.”[13]

Editorial Statement: This reflection is an invitation to the McGrath Institute’s conference at Notre Dame celebrating the 50th anniversary of Introduction to Christianity. The event will feature many of the world’s preeminent experts in the field of Benedict XVI’s thought. Registration is still open. Posts will be collected here as they are published. 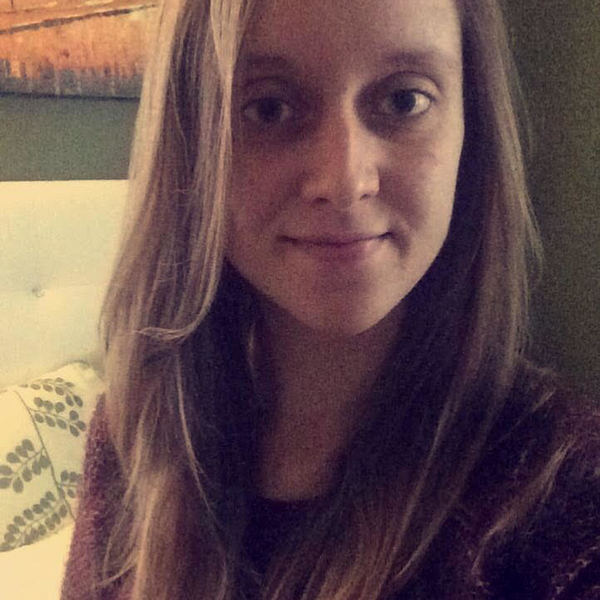 Lauren Beversluis is an MA candidate at the University of Chicago Divinity School, and works part time for the Lumen Christi Institute. Her academic interests include biblical exegesis, cosmology, and iconography in Late Antique and early medieval Christendom.