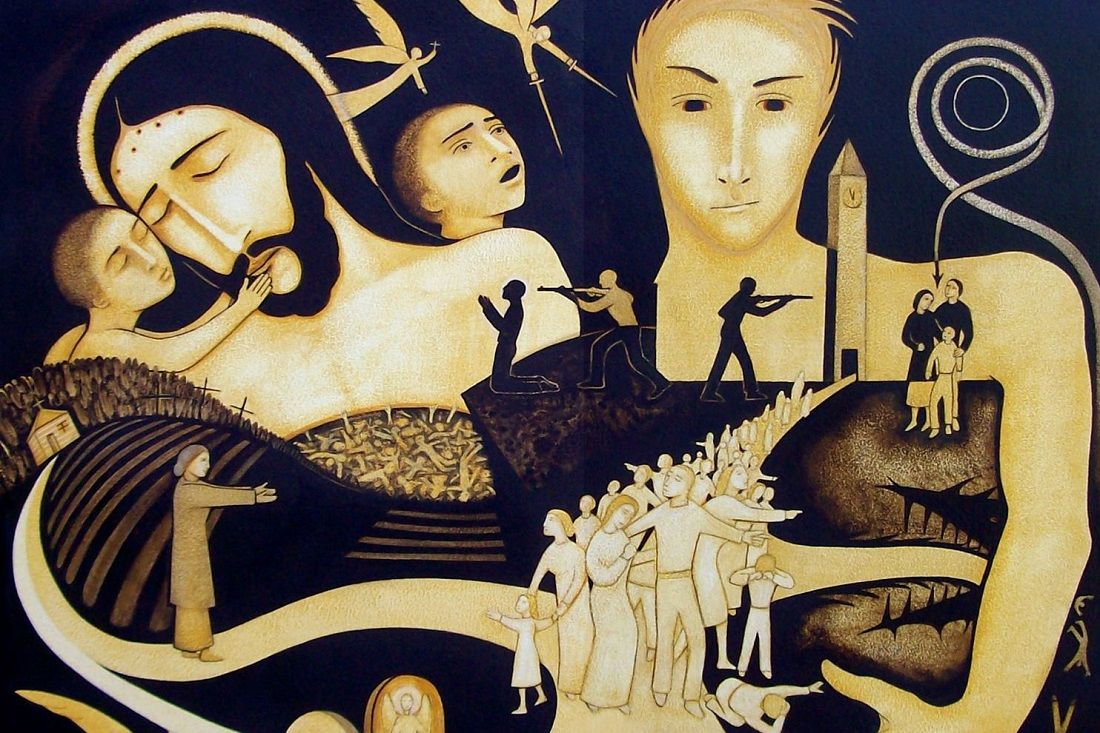 Only one novel has ever brought me to my knees in tears before an icon. Reading Michael O’Brien’s Father Elijah compelled me to cry tears of contrition before the small Pantocrator that hung over my nightstand. The author of a dozen works of fiction, O’Brien captivates his readers, offering them a vision of the kingdom of God that is clear, convicting, and revelatory. While O’Brien has been called an “apocalyptic” writer, he is so in the true meaning of the word: he discloses truth. Only a handful of his stories create end-of-the-world scenarios, but all of them uncover truth, showing readers the way things are versus the false or delusive version of reality to which we may have succumbed. Like a contemporary Dante or another Flannery O’Connor with her realism of distance, O’Brien seeks, through his work, to transform his readers’ vision.

This description of O’Brien pertains as much to his nonfiction as his fiction, especially in the case of The Family and the New Totalitarianism, brought into a new form by WiseBlood Books, decades after its original publication. Because of O’Brien’s prophetic insight, this work, drafted partially in the 1990’s, speaks as resonantly to the world of 2019 as it did then. And, I would prophesy that—unless, by the grace of God, things dramatically alter their current course—the essays will continue to prove prescient.

O’Brien argues that the push towards a globalized world will harbor (is harboring) a “new totalitarianism,” one quieter and more duplicitous in its approach to controlling people. This new system of enslavement will be invited by the people, as they believe leaders’ claims to know what’s best for individuals and their families. Rather than one man overthrowing the national government, as did Hitler or Lenin, this totalitarianism will occur like a snowball rolling down a hill, picking up speed and pulling everything into itself with unstoppable momentum. O’Brien warns, “The human community is never more endangered than when totalitarianism appears to be benevolent.” I think of Dostoevsky’s “The Grand Inquisitor” chapter in The Brothers Karamazov where the mobs and masses delighted in the holocaust of a hundred souls because at least the living had their bread and circuses. If we are enjoying luxury without inconvenience, freedom without persecution, but we are living in a fallen world, then perhaps we need to look around us with more discernment to uncover who is suffering under the might of whatever regime is currently in power.

For O’Brien, to counter the "benign" takeover by sprawling governments, we must pour our energies into the family. For it is the family that becomes the locus where love is most manifest: love, not as our culture defines it as “lust” or “romance,” but love in its actual incarnation, love that elicits its being from the Triune God, that is extended to others regardless of their merit. Such love requires practice and fortitude. Whereas the sweep of culture tends to make impotent this weapon, the Church must recognize that love is both shield and sword, defensively protecting the mind from tribalism and autonomous authority and, in its offense, striking out against lies, despots, and those who choose evil over good. We must create a civilization of love in the midst of what Pope John Paul II calls a "culture of death.”

As a Canadian, O’Brien often draws his examples from this national arena, but readers do not have to reach far to think of examples from their own country. Consider the 2018 case in the United Kingdom where the government did not allow Alfie Evans’s parents to transport him to Italy for further treatment but required them to allow their son to die in the British hospital. Or, in the United States where the government detains immigrants at the Mexican-American border and separates parents from their children, even from infants. Every year, governments of supposedly democratic nations are increasing their power over families, claiming to know what is best for children, sometimes in direct contradiction to the will of the parents. O’Brien illustrates his claims with cases particular to his home country, but he points to problems the world over.

Remember that in the 19th century, the U.S. forced Native Americans to send their kids to boarding school in the hopes to “kill the Indian”in them and save their humanity. I fear we are seeing similar problems in public education in America, as schools are trying “kill the Christian” in students or “kill the reasoning mind” within them and program children to go with the flow. As my coffee barista, with her blonde dreadlocks swinging, quipped to me, “The only thing that goes with the flow is a dead fish.” In his book, O’Brien asks,

How shall we build a truly Christian society if we do not have a clear understanding of its foundations? How shall we detect its counterfeits if the very shape of reality eludes us?” O’Brien then points to education as an arena experiencing “a fundamental reality-shift, a radical destabilizing process that proceeds apace under cover of institutional structures which appear more or less intact.

Again, though O’Brien’s examples are from Canada, we see the same problems occurring in America. One friend of mine in California lamented that her six-year-old daughter was forced to choose a different “favorite book” for her school report because the Bible was an unacceptable choice for the classroom. In Arkansas, where I currently live, another friend horrified me when she informed me—through a litany of expletives—that headphones were part of her kindergartener’s school supply list. Apparently, children in our local public schools will be spending much time in isolation, on screens, doing “work” on iPads. No matter how much the family is trying to teach children that they are made in the image of God, that they are part of the mystical body of Christ, and that they do not belong to themselves but are his; as students in public education, these kids are receiving a different message. They are being formed by a system that gives precedence to technology over reading, encourages passive responses to screen over critical thinking and discernment, and isolates kids with earbuds rather than promotes conversation with others. Prioritizing family means not only defending children against totalitarian legislation but also forming them through educational practices that cohere with the Christian knowledge of reality.

O’Brien considers our crisis and its potential solutions from a Roman Catholic perspective, but his essays speak to all Christians. The words of Pope John Paul II on the significance of family, notably in his landmark encyclical Familiaris Consortio, “On The Role of the Christian Family in the Modern World,” are echoed by Protestant theologians, such as Russell Moore, the President of the Ethics and Religious Liberty Commission of the Southern Baptist Convention, whose 2018 book The Storm-Tossed Family defends the family while also reminding the Church that God’s kingdom is the first priority. Even while seeking to protect the family from the insidious forces of the new totalitarianism, we must not idealize or idolize the family. Still, the family is the starting place for the Church: husband and wife act out the love between Jesus Christ and his Church, and children, in O’Brien’s words, “are icons of Christ.”

Within the family, we find community practiced, identity formed within a collective rather than as an isolated individual, and a sense of shared mission. If we forego our dedication to the family, we lose our grip on ourselves as persons among persons. O’Brien warns us:

Exercising undue social pressures, manipulating public opinion and government legislation, small elites are seeking to redefine us to ourselves. They would determine who and what we are, and what we shall become. In the process they are undermining the rights and duties of the family.

We become more alienated from other people, more prone to the deceptions of culture and institutions that seek to redefine us as autonomous units. Our family keeps us cohesive in a culture that wants us to feel lonely and that preys on our insecurities.

The threat to our children should be the primary reason for reading O’Brien’s essays. Legislation in 2019 in New York and other states expands the genocide wrought by abortion, now condoning partial-birth abortion. At the National Prayer Breakfast in Washington, D.C. in 1994, the same year that the United Nations deemed the International Year of the Family, Mother Teresa decried the proliferation of abortion. What O’Brien highlights for readers is that global organizations and national governments may pay homage to the family and family values while they do not value family at all. They do not value what the Church values, which is life, from its beginning to its end. In addition to expanding provisions for abortion, now almost 30 countries from Australia to Uruguay permit euthanasia. When differently-abled people choose suicide, social media celebrates their courage. We have been inhabiting a culture of death for decades, only instead of merely promoting death, governments now are often legislating on its behalf.

Whereas we are often blind to the detrimental decisions of world powers, those that appear benign or even desirable, O’Brien’s essays grant us ears that may hear and eyes that may see. O’Brien’s essays do not foretell the future. How could they possibly do so? Yet, 25 years ago, these essays spoke prophetically about what might occur in the third millennium and many of their predictions have come to pass. Because of the evidence in their favor, we would do well to read O’Brien’s essays again now, as his unfulfilled prophecies seem more likely to be fulfilled than ever.

EDITORIAL NOTE: This is a greatly expanded version of the introduction to the newly revised edition of The Family and the New Totalitarinism (courtesy of Divine Providence Press, an imprint of Wiseblood Books).

Featured Image: Cover image from The Family & the New Totalitarianism by Michael O'Brien, used by permission of Divine Providence Books, all rights reserved.

An Eschatology of the Secular 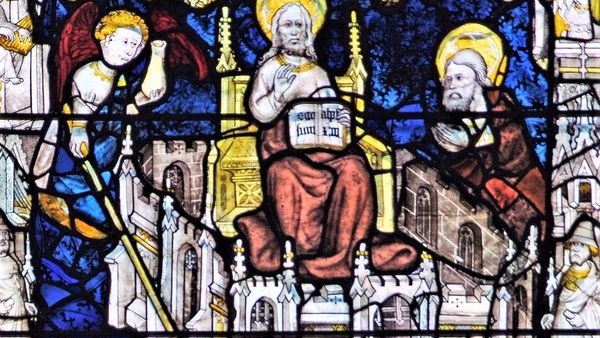