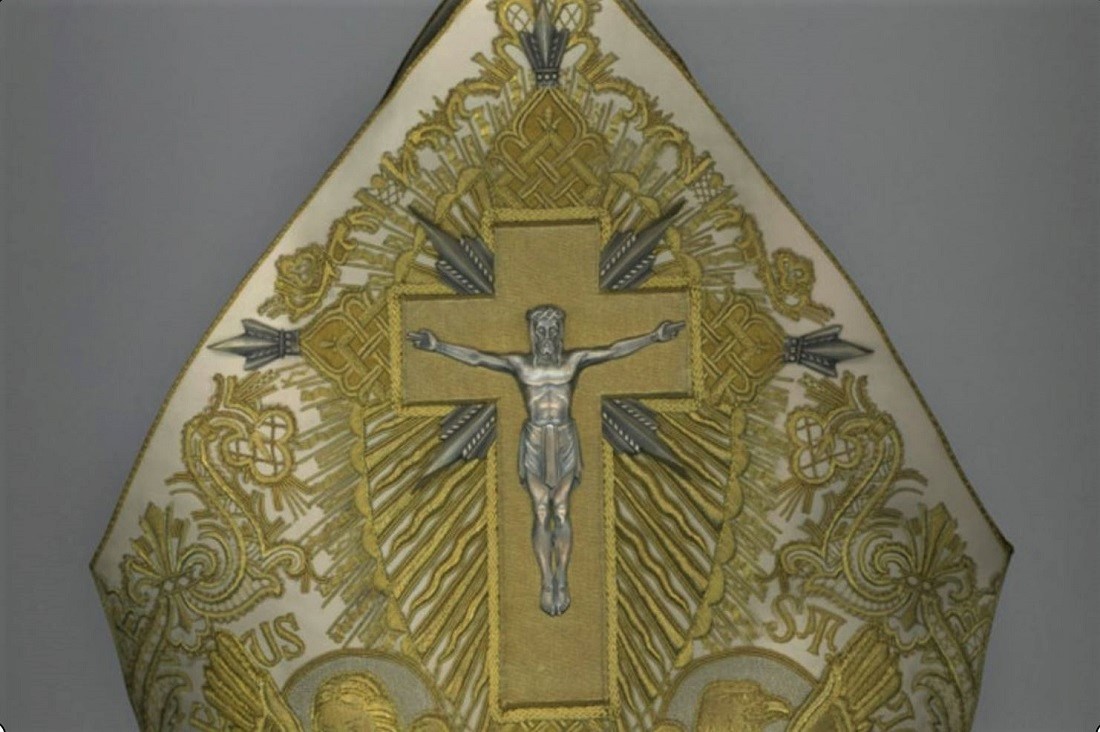 As the dust of controversy settled in the weeks following the Met Gala opening for the Heavenly Bodies: Fashion and the Catholic Imagination exhibition, one image crystallized the event’s exploration of fashion and the “Catholic imagination” and inspired the most divergent reactions to it: Rihanna in a low-cut, jewel-encrusted mini-dress, matching coat, stilettos, and a mitre. In most photos from the gala, she does not lean into the sexiness of her papal-inspired attire, nor its playfulness. Her expression is imperious; her stance, authoritative. She evokes power.

Representing one type of reaction to this image, Cardinal Dolan, who also attended the gala, said that he lent Rihanna his own mitre for the event. It was a joke, but the Vatican did lend many artifacts for the exhibit the gala celebrated. Officially, the Catholic Church collaborated with the museum to help create the exhibit.

But other reactions were not so sanguine. A People magazine article ran with the headline, “The Met Gala’s ‘Catholic Imagination’ Theme Called ‘Blasphemous’ and ‘Sacrilegious’ by Critics”. It went on to chronicle Twitter outrage at the event. Another website put up a poll asking whether Rihanna should “go to hell” for her outfit. Rihanna was almost always mentioned in broader expressions of anger or sadness at the gala.

Rihanna’s costume represented for some the deep problem with the Met Gala: blasphemy. Writing for First Things, Matthew Schmitz refers to “tasteless, indecent, and blasphemous fashion items.” After criticizing Rihanna, Piers Morgan moves on to Madonna, calling her a “blasphemous old crone.” And the term blasphemy, as the People article (among others) points out, was all over Twitter.


The word “blasphemy” and its variants appear in seven different passages of the gospels. In three of them, Jesus speaks about blasphemy against the Holy Spirit as the only unforgivable sin. In the other four, Jesus is accused of blasphemy himself. This collection of gospel occurrences paint blasphemy as a grave offense that we can get gravely wrong. That duality continues through the rest of the New Testament, where blasphemy is both associated with evil-doers and leveled as a false accusation against those doing the work of God.

To blaspheme is to insult God, to fail to show God proper reverence, and every time Jesus is called a blasphemer, it is because he claims for himself the power and identity proper only to God. You can see the point of the accusers. To claim that the Holy One, the Most High God, the One who must not be represented in graven images, is present as a mortal human body—and as one’s very own human body—sounds egregiously flippant, abominably prideful, or both. For who could anticipate that the transcendent Creator of all would be found as a creature, dwelling among those God had made? And yet the God who is always on the move outpaced the perceived blasphemy of calling a creature God, by becoming a creature without ceasing to be the Creator. So orthodox Christianity has claimed for almost 1700 years.

One difficulty of identifying blasphemy in the gospels, then, is that the Christian God is always doing a new thing, and we are always catching up, like Moses, catching glimpses of God’s back. There is a second difficulty to identifying blasphemy. It is captured in the controversy around Andre Serrano’s 1987 photograph Piss Christ, featuring a plastic crucifix submerged in urine. As the photograph was exhibited, accusations of blasphemy flooded in. It is doubtful any artwork in the last forty years has been called blasphemous more than Piss Christ. Yet Serrano himself describes his photograph as an act of attempted fidelity to Christ. Born, raised, and educated Catholic, Serrano wanted to comment on the “billion-dollar Christ-for-profit industry” he found deeply problematic. In other words, his “blasphemy” was an attempt to expose and lament a prior insult to God.

Serrano’s work raises a question that should give pause to anyone tempted to level the charge of blasphemy: In a world where blasphemy masquerades as piety, will not some attempts at piety appear to us as blasphemy? How can we distinguish acts of blasphemy from those confronting us with difficult truths about the state of our piety?

The case of Piss Christ is difficult to dismiss because Serrano’s desire to uncover problematic financial systems cloaked in piety should sound familiar to Christians. It should call to mind Jesus in the Temple, overturning the tables of the money-changers, charging them with turning his Father’s house into a den of thieves. Jesus’s own act—much more aggressive than Serrano’s—was also received as blasphemous in the gospel story. And yet Christ’s act expressed, not disdain for the Temple, nor worship, nor God, but Jesus’s deep love for them. Loving someone or something well means giving painful criticisms in the hope of making the beloved better. Here is yet another complexity to charges of blasphemy, one that requires us to distinguish between God and those institutions that seek to worship God. To expose Temple and Church abuses is not a failure of love; it is what Love demands.

Of course, one can imagine a table-turning event in Temple or Church that is blasphemous, just as one could imagine a desecration of the crucifix intended to insult to God. For blasphemy comes to us embedded in particular histories. It is always highly contextual. Words and acts of insult, like all signs, mean in particular times, places, communities, and ways. I take it Pope Benedict XVI and Pope Francis have both understood that about their own papal vestments, though they opted for different aesthetics. Committed to the New Evangelization idea that beauty could evoke people’s desire for God, Pope Benedict wore sumptuous papal vestments and gorgeous accessories. He wanted, through his clothing, to signify the beauty and desirability of God and so in this small way cooperate in the redemption of human desire. Pope Francis wants to be a shepherd who smells like his sheep, whose simplicity reminds us of the Good Shepherd who lives with and loves the world’s marginalized. He is, in a different way, hoping to participate in the redemption of human desire.

Neither pope’s attire, of course, is blasphemous; they signify differently, drawing on different strands of the Church. There is room for many kinds of fashion-speech about God. But there has been one small, albeit significant, section of the Church that has considered attire like Pope Francis’s a betrayal. The politics surrounding these traditionalists’ charges of blasphemy are worth consideration, for they disclose the way church vestments—like all divine signs—are made in histories that give them meaning in complex ways.


Latin American historian Benjamin Cowan tracks the struggle over vestments centered in Campos dos Goytacazes, a community in Brazil where traditionalist bishops fought for episcopal finery in the years of and around the Second Vatican Council. Criticizing simple episcopal attire as signifying socialism, these traditionalist bishops saw bishops as obligated to wear fine vestments that displayed their office as a princedom more splendid than temporal ones.  These bishops claim episcopal finery affirms the “beauty of inequality” and reflects the “social hierarchy which is the spirit of the church.”[1] For such traditionalists, it shores up the social capital of the Church, which is supposed to ratify a social order that is riven with inequality—and that is bound up with the complex story of race in Brazil. Darker bodies did not ascend the hierarchy of either the temporal or ecclesial princedoms. So what, in mid-twentieth century Campos dos Goytacazes, was episcopal dress signifying?

Divine signs, even when those signs are clothing, are highly contextual. Charges of blasphemy can only be assessed through attention to particular histories. This is not to claim all interpretations of such signs are equal or persuasive, but to point out that their meaning is under-determined and that the judgments required to identify blasphemy will always be subject to revision. There is a way of seeing the Met Gala as blasphemous, as the reduction of the divine to bald eroticism and pageantry in service of a luxurious commercialism. But what if we picked out different historical strands to interpret Rihanna’s papal-inspired dress?

What would it mean to see Rihanna evoking ecclesial authority and baring black flesh through the history of the Church’s relationship to such flesh? What significance might we perceive through reflecting on her as a woman from Barbados—a former colony of Britain, where Christians enslaved black residents for years? And to see Barbados’s story as part of the larger history of the West Indies, where Bartolomé de las Casas described the scourging of black flesh “not once but thousands of times” by Spanish colonists?[2] These colonists, moreover, used the symbols, words, and tools of Christ to accomplish their violent domination, in what is surely one of the worst cases of blasphemy in the modern world. What does it mean to see Rihanna exposing and celebrating her black, female body—the very type of body that the Church was complicit in abusing for centuries—with the symbols of that Church? Is there a way to see Pope Rihanna as lauding the dignity of black womanhood, insisting that is invested with the divine image, that her flesh is no less precious than that of the pope himself?

I wonder if there is a way of receiving the striking, powerful image of Rihanna as helping the Church newly imagine itself and newly receive the Christ exalted after coming in the form of a slave. But it is difficult to discern blasphemy from truth-telling in a world where blasphemy has come to us cloaked as piety. And God, after all, is always on the move. 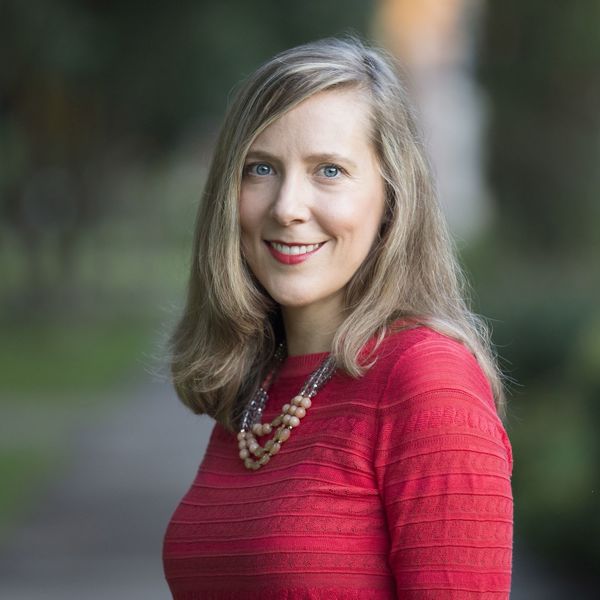 Natalie Carnes is Associate Professor of Theology at Baylor University. She  recently published the book Image and Presence: A Christological Reflection on Iconoclasm and Iconophilia.