Rosman's articles point toward a significant lacuna that exists within both philosophical and theological accounts of the Catholic imagination: the dearth of attention to the ecclesial nature of this imagination.

In my own graduate studies, the term "Catholic imagination" was often defined by the transformation of theological doctrines into epistemic or literary principles:

Such an approach, although attractive, is fundamentally inadequate. It transforms the drama of salvation into principles for salvation. It reduces history to philosophy.

The temptation of scholars and artists alike is to reduce the Catholic imagination to a series of principles and ideas (that any human being of good will could agree with). Such an approach takes away the shocking particularity of the Gospel—the utterly scandalous claim that the triune God has decided to save humanity through a Church! Church life, in the end, is the heart of the Catholic imagination.

The great monuments of the Catholic imagination were not created by literary artists who separated themselves off into a Donatist sect where they alone spurned the kitsch of parish life, where they alone were the "saved." No, such monuments came into existence through the instruments of theologians, artists, and spiritual writers who allowed their imaginations to be sanctified through the mundane drama of ecclesial life. After all, Palestrina didn't just write liturgical music as an artist. He attended confession and got spiritual direction from St. Philip Neri.

Artists and academics alike have a worrisome propensity to imagine that their intellectual work, their artistic creations are the source of salvation. They form Donatist guilds both conservative and progressive (operating now via Facebook groups), condemning "normal" parishioners who can't grasp the avant-garde realness of their work, the theology that seeks to convert men and women to the "real" understanding of the Gospel.

Don't get me wrong. Catholic artists and academics have something to contribute to ecclesial life. But they do so as ecclesial persons, as those who are themselves undergoing the process of salvation through life in this particular parish. Other human beings, Christian or not, can benefit from the work of such artists and thinkers. But they benefit because those who cultivate a professional Catholic imagination have allowed ecclesial life to seep into the marrow of their bones, manifesting to the world (stealing a line from Irenaeus) that the glory of God is the human being fully alive in Christ.

This ecclesial chastening of the Catholic imagination should be understood as a gift. Perhaps, like Hugh of St. Victor, we can imagine that those who traffic in the academic and literary fostering of a Catholic imagination do create healing medicine for the life of the Church and the world alike. They adorn themselves through study and artistic creation for the final wedding feast of the Lamb. They evangelize the created order through the creation of culture.

But the ecclesial nature of this imagination means that their non-academic confreres in Christ are also adorning themselves in the very kitsch that the intellectuals spend their lives attempting to destroy. In the "simple" thinking that they seek to replace with their more sophisticated philosophical and literary artistry.

The Formation of the Imagination

Sr. Thomas More Stepnowski, VP for Academics at Aquinas College (Nashville), demonstrates why time for reflection is needed to see the real world as God does. 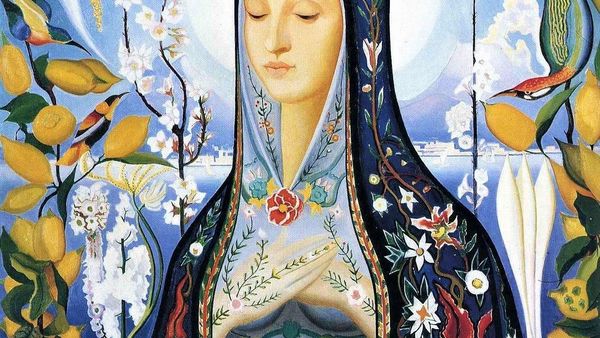