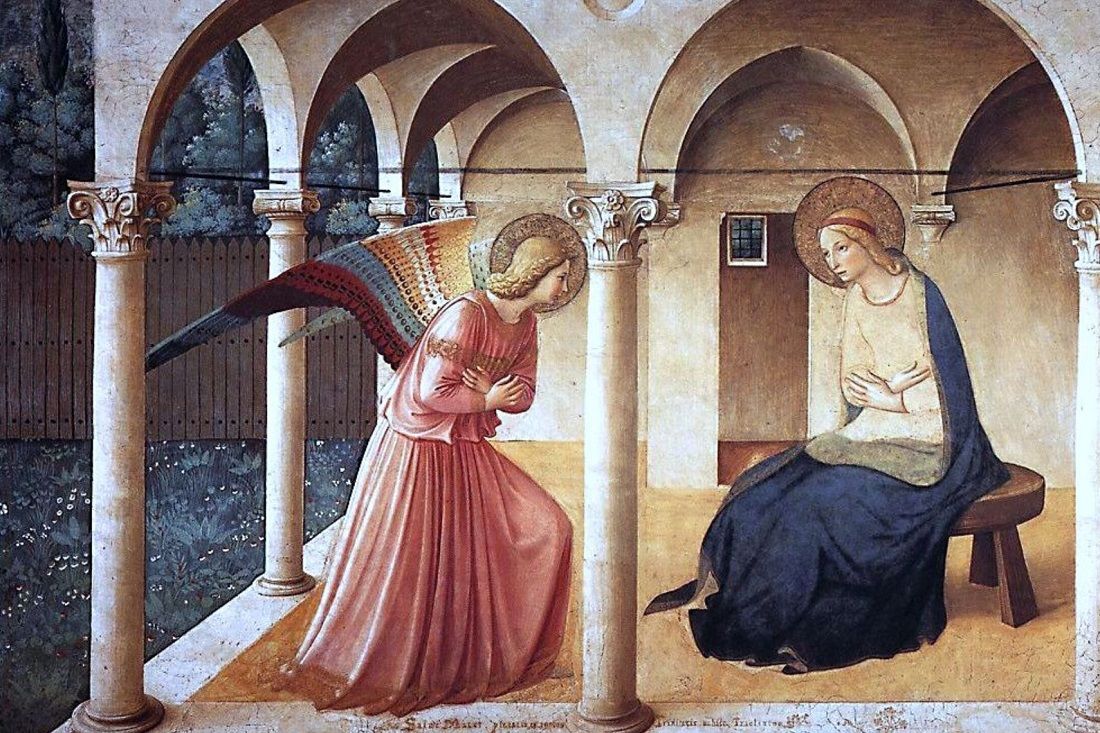 Mary said: My soul is deeply troubled; what can this greeting mean? Am I to give birth to my king and yet remain a virgin forever?
–Antiphon for Daytime Prayer, Advent


I prayed these words most days last Advent. It looked like my bishop would be ordaining me as a deacon this May. At least for diocesan seminarians, at diaconate we make our lifelong promises to be celibate, obedient and faithful to the Liturgy of the Hours. It comes up fast and raises a lot of questions. Is it commitment possible and worth the risk?

Mary’s heart was full of questions—Luke’s gospel and this suggest as much. These are not necessarily questions of pious wonder:  she was deeply troubled, utterly unaware of how this Annunciation was going to happen or what might happen as a result. This year Church observes the Annunciation on April 9 because March 25 fell on Palm Sunday. Palm Sunday evokes Abraham, who was willing to offer his son. Both Abraham and Mary show us how to approach celibacy, commitment and the unpredictability of vocation.

On Palm Sunday the Church praised and mourned the offered Son surrendered to the Father’s will. Palm Sunday evokes the story of Abraham, who was willing to give up his son. Sacrificing Isaac would have meant giving up his only heir and the one assurance God gave him that his offspring would be like the uncountable stars (Gn 15:4). As he climbs Mount Moriah, one can almost see the stars slowly burning out one by one. How can a man with no children have descendants?

The Church can ask itself a parallel question:  Can a celibate life bear fruit today? Sure, priests “give up marriage”—but that is not much of a radical witness right now. Most people my age “give up marriage” for all sorts of other goods. In the U.S. 51% even of people who get married eventually “give up marriage,” often multiple times.

It has proved helpful to explain that priests give up sex. This seems to get the point across. Plenty of good reasons to give up marriage. Not many to give up sex. Celibacy in a sex-saturated world is either useless or prophetic. Cardinal Francis George was known for saying, “The Church needs celibates like she needs contemplatives.”

And what if, as is happening in Japan, people stop having sex? On the anonymous social media app Whisper, a poll asked whether people would rather have sex or wifi—many preferred wifi. Joking or not, you can’t fall in love unless you look at people and you can’t look at people if you’re looking at your phone. What does celibacy mean then?

Celibacy is an act of faith akin to Abraham’s. There is no guarantee a priest will not be lonely. There is no guarantee people will want to listen to a person whose life does not look like theirs. “Look toward heaven and count the stars, if you are able,” God tells the old man. “So shall your descendants be” (Gen 15:5). This hardly arouses confidence in a 99-year-old man with a barren wife. A fortiori celibate people make “no sex” a lifelong practice. Celibacy looks up at the Middle Eastern sky and climbs Mount Moriah with no proof that there will be any descendants.

Mary professes the same nearly absurd faith. In a "Homily in Praise of the Virgin Mother" Bernard of Clairvaux distinguishes between Mary’s humility and virginity but concludes that “without humility, I will venture to say that even the virginity of Mary would not have been pleasing to Him.” He characterizes Mary’s humility as a necessary condition of her fruitful virginity, but shows her virginity is also a cause of humility. Mary’s humility is not just her state of humble wonder at God’s achievement, but a result of the virginity that is embarrassment and folly to the world. The Church chooses to believe—because Jesus was celibate, because Mary was celibate, because throughout its history celibate priests have continually brought life to the Church—that God can make celibates fruitful now.

Abraham’s example suggests the question of whether celibacy can be fruitful, but Mary’s example raises the issue of whether it is even possible. Is it metaphysically possible for 25-year-olds to decide now what they will be doing in 50 years? How can anyone speak for a not-yet-existent older version of oneself? How could Mary commit to witness a Calvary she could not imagine? In our age of ultimate flexibility, marriage vows, religious vows and ordination promises do what Mary did:  testify to the human person’s unity and continuity.

But more important than deducing how that happens is realizing that, regardless of the cause, it does happen. Plenty of cultural-moral taboos have yielded to popular pressure in recent years, but nothing is as scandalous as couples who get married at 24, aware of the risk but unafraid to commit. They prove that in grace it is possible to choose a permanent vocation. They prove that the angel’s promise is reliable:  God makes all things possible. And God is how such absurd commitment becomes possible.

Yet none of this is easy. Fra Angelico’s "Annunciation" in the Florentine Convent of San Marco depicts Mary bent over, perhaps in prayer. But there’s also something that resembles nausea. Her eyes look distant and her hands pressed to her stomach. This may be prayer or awe, but it may also be terror. Luke tells us she was “greatly troubled” (1:29). Maybe she feels oncoming pain from the Cross or from morning sickness. Maybe she is a little terrified at the Pandora’s Box Gabriel offers her. However, it is not a Pandora’s Box to unleash evil on the world. This Pandora’s Box is the vessel of her virgin womb that can, with Mary’s cooperation, unleash the Son. How could not someone so young be afraid of such a possibility?

In an endlessly mobile age where anyone can move anytime, diocesan priests commit their lives to the salvation of a particular area. I do not know what my diocese will look like in 10 years, let alone the Church as a whole. Others cannot know exactly what their spouses will be like in 10 years. Mary knew mobility—she gave birth away from home and lived several years as a refugee. But she also knew stability—paradoxical because it came from risking everything to settle down in an unresolved situation for the sake of the people God placed in her life.

Amid fragmentation and fragilization, Christian vocation is a small annunciation of badly needed good news. It is easy to call things social constructs. Plenty think that is what celibacy, Catholicism and all religion really are. They often do not realize our situation—being able to label everything a social construct—is a relatively new, socially constructed situation. That situation is the compound interest of social trends and philosophical assumptions. Critiquing everyone’s imposed hermeneutic is also an imposed hermeneutic. This endlessly revolutionary anthropology titillates but does not satisfy.

In response, celibate people and all vocations say, “There are some things that last.” Christian vocation, especially celibacy, is a rash and foolhardy practice, but vocations have lasted this long because the Good it serves lasts forever. Christians become Gabriel to a nauseous world.

Christian life may appear a waste of perfectly good freedom. The Annunciation is hope that Abraham and Mary’s waste is not in fact a waste of life, but a source of life. Mary wrecks her life and the Word becomes flesh. The question is:  Will we wreck ours? Be not be afraid.