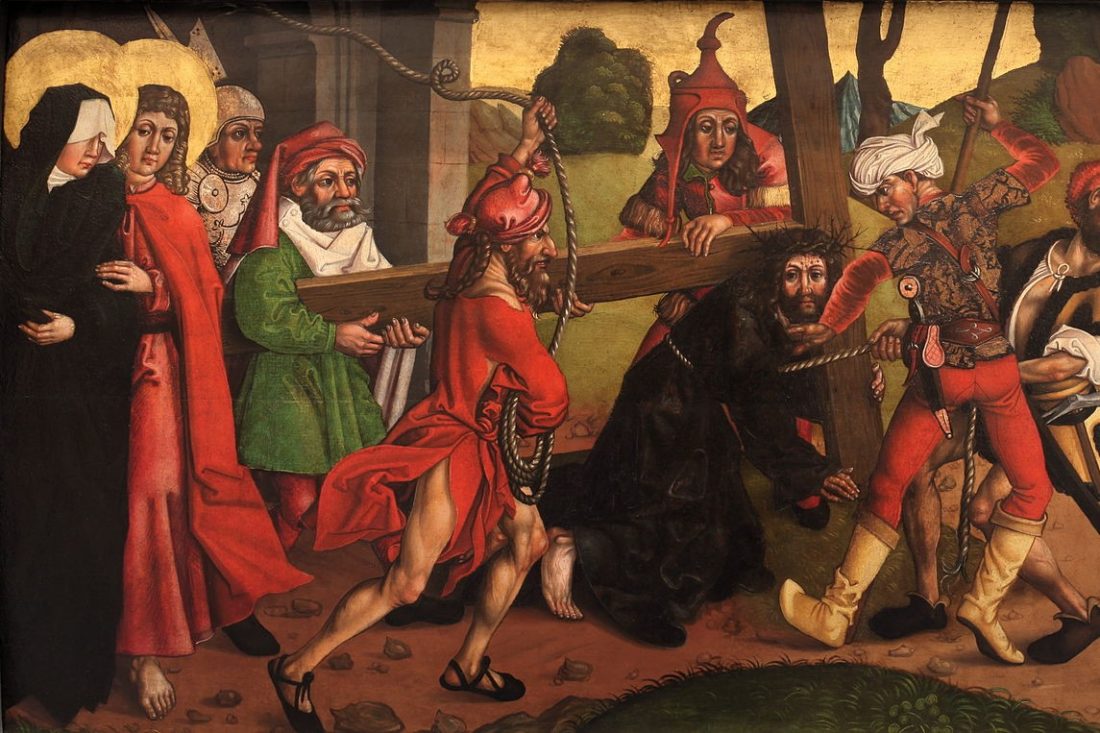 Throughout this Holy Week, we are going to be sharing a series of poetic meditations on the Stations of the Cross by Malcom Guite. An Anglican priest-poet currently serving as Chaplain of Girton College at the University of Cambridge, Guite has published eight books of his poetry, with two more forthcoming. His collection Sounding the Seasons comprises sonnets composed for various feasts and seasons throughout the liturgical year, including this series. We are grateful for Guite’s kind permission to share these sonnets on Church Life Journal.

Jesus’s first fall is followed by meeting his Blessed Mother. His second is followed by meeting the women of Jerusalem. Moments of excruciating agony and humiliation give way (however briefly) to moments of extreme tenderness and empathy. As Jesus’s pain intensifies in the second fall, so also the scope of his Passion broadens in the encounter with the women of Jerusalem: Jesus’s prophesy indicates that his Death is no ordinary death. It will forever change the course of human history; there is no time or place or person that will remain unaffected by it. Those who weep and mourn for their sins will one day laugh and rejoice in Christ (cf. Lk 6:21b; Mt 5:4), but those who laugh and revel now in their selfishness and sinfulness, who reject Christ’s invitation to take up their cross and follow him, will one day “say to the mountains, ‘Fall on us’; and to the hills, ‘Cover us’” (Lk 23:30; cf Lk 6:25b). Here, composer James MacMillan conveys the devastation and devotion present throughout Luke’s Passion narrative with music that alternates between visceral drama and luminous serenity (the encounter with the women of Jerusalem begins at 8:35).


VII. Jesus falls the second time
Through all our veils and shrouds of daily pain,
Through all our bruised bruises and re-opened scars,
He falls and stumbles with us, hurt again
When we are hurt again. With us he bears
The cruel repetitions of our cruelty;
The beatings of already beaten men,
The second rounds of torture, the futility
Of all unheeded pleading, every scream in vain.
And by this fall he finds the fallen souls
Who passed a first, but failed a second trial,
The souls who thought their faith would hold them whole
And found it only held them for a while.
Be with us when the road is twice as long
As we can bear. By weakness make us strong.

VIII. Jesus meets the women of Jerusalem
He falls and stumbles with us, hurt again,
But still he holds the road and looks in love
On all of us who look on him. Our pain
As close to him as his. These women move
Compassion in him as he does in them.
He asks us both to weep and not to weep.
Women of Gaza and Jerusalem,
Women of every nation where the deep
Wounds of memory divide the land
And lives of all your children, where the mines
Of all our wars are sown: Afghanistan,
Iraq, the Cote d’Ivoire . . . he reads the signs
And weeps with you, and with you he will stay
Until the day he wipes your tears away.