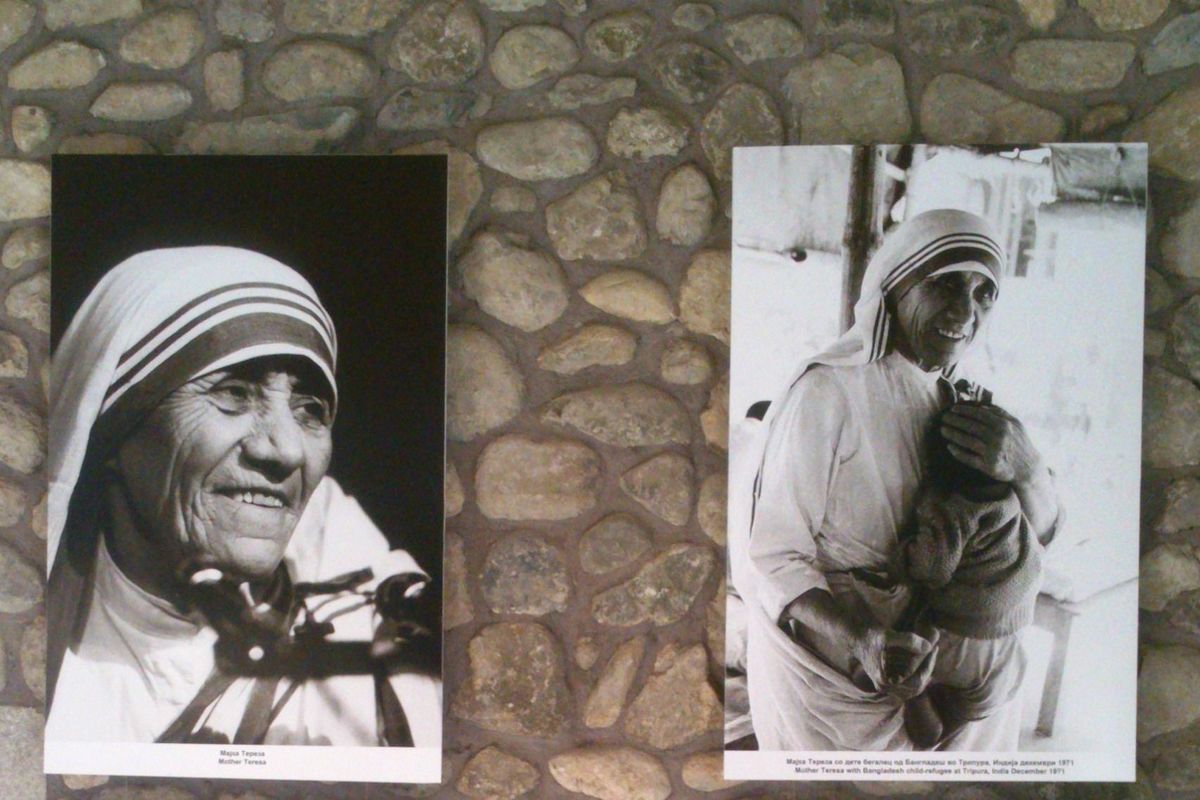 I first “met” Mother Teresa when I was about eight years old passing countless times by a small magazine clipping posted on our fridge. On it was one of those striking photographs of her holding a small child, the lines deep in her weathered, unmistakable face under her white and blue sari. The words “Another pro-life extremist…” graced the bottom of the picture. I don’t think I understood what that meant or who Mother Teresa was at the time. But I have seared into my mind that powerful image and those provocative words.

As a Notre Dame college student, a decade later, I encountered her again in a class cross listed in theology and peace studies taught by Margie Pfeil called “Vocation and Leadership in Catholic Social Tradition.” Having been introduced to the Missionaries of Charity through service work in Rome the semester before, I decided to write one of the required papers on Mother Teresa. This brought me into contact not only with Mother Teresa’s life story (recounted beautifully by Lenny Delorenzo in a recent Church Life publication), but also the iconic black and white photographs taken by journalist Malcolm Muggeridge. It was his groundbreaking biography “Something Beautiful for God” which came out in 1971 that introduced Mother Teresa to the Western World. The simplicity and power of these photographs, as well as the remarkable sisters I had encountered in Rome in my semester abroad launched for me a lifelong fascination and love for Mother Teresa and the Missionaries of Charity who have singularly defined my understanding of human dignity.

I spent the next summer living and working with the Missionaries of Charity in Memphis, Tennessee, in a large old home for women coming out of homelessness and domestic violence. Anyone who has visited or worked with these sisters will recognize the austere beauty of one of these homes, always graced with a simple, nearly empty chapel, a single flower in a vase by the Tabernacle. The sisters sit barefoot on the tile floor, leaving their sandals by the door. This, alongside their incredibly efficient, almost neurotic cleanliness is a way of bringing beauty and light to those living in poverty and squalor. Without many adornments, these sisters cover places formerly given over to filth and despair with a mantle of peace and order. Among other pearls, here was an important lesson I have not forgotten on the dignity of one’s environment.

I was so transformed and challenged by my first summer of poverty and simplicity with these sisters (and so uncertain about whether to join them) that I decided to spend another summer with them, this time in heart of it all, Kolkata (formerly Calcutta), India where Mother Teresa began the Missionaries of Charity. I knew that in order to understand a way of life so radically un-American, so anonymous, so much with the world’s invisible poor, I needed to walk where Mother Teresa had walked and see what she saw.

Needless to say, it was a shock. Kolkata is one of the poorest, dirtiest, most crowded cities on earth, and every moment is an assault to the senses. Washed over by the heat, the stench, the filth, the colors, the streets thick with beggars and the unrelenting traffic and noise, one can only imagine what passion and convictions were aroused in the heart of the young Sister Teresa as she walked to and from her posh Loreto Convent past the many cries for help and love. Thus she began to visit them, to go where no one else had gone and to touch and be with the untouchables. It was in that “darkest hole” that this little Albanian school teacher saw the greatest light, where she found Christ in the distressing disguise of the poorest of the poor, and where she slowly received her “call within a call” to begin a new order of sisters.

One of the greatest insights I had into Mother Teresa’s compelling but admittedly intimidating spirituality came when I happened upon the showers at Kaligat, Mother Teresa’s now famous home for the dying, formerly a Hindu temple. On the wall of the shower is written the words “This is My Body.” The place where so many diseased and dying men and women are washed carefully by volunteers and sisters is another altar of the Eucharistic Christ, present for those with eyes to see and hearts to receive. Those black letters on the wall get to what essentially so captures and mystifies the modern world about Mother Teresa: taking those whom the world has rejected and forgotten and recognizing in them the Real Presence of the Divine and our greatest teachers.

My summer with the Missionaries of Charity in Kolkata did not lead me to become one of them. It did, however, change the way that I saw myself, my own grandeur (or lack thereof), the centrality of Christ’s poverty, and the call to marriage and family life which, similarly to religious life, asks everything of the soul, the mind, and the body. I have been indelibly marked by the life and work of this mesmerizing saint, officially joining the roll call of the saints on September 4th. Her words, her work, and her love have influenced thousands, probably millions of people throughout the last half of the 20th century and continue to do so thanks to the authenticity and integrity of the Missionaries of Charity.