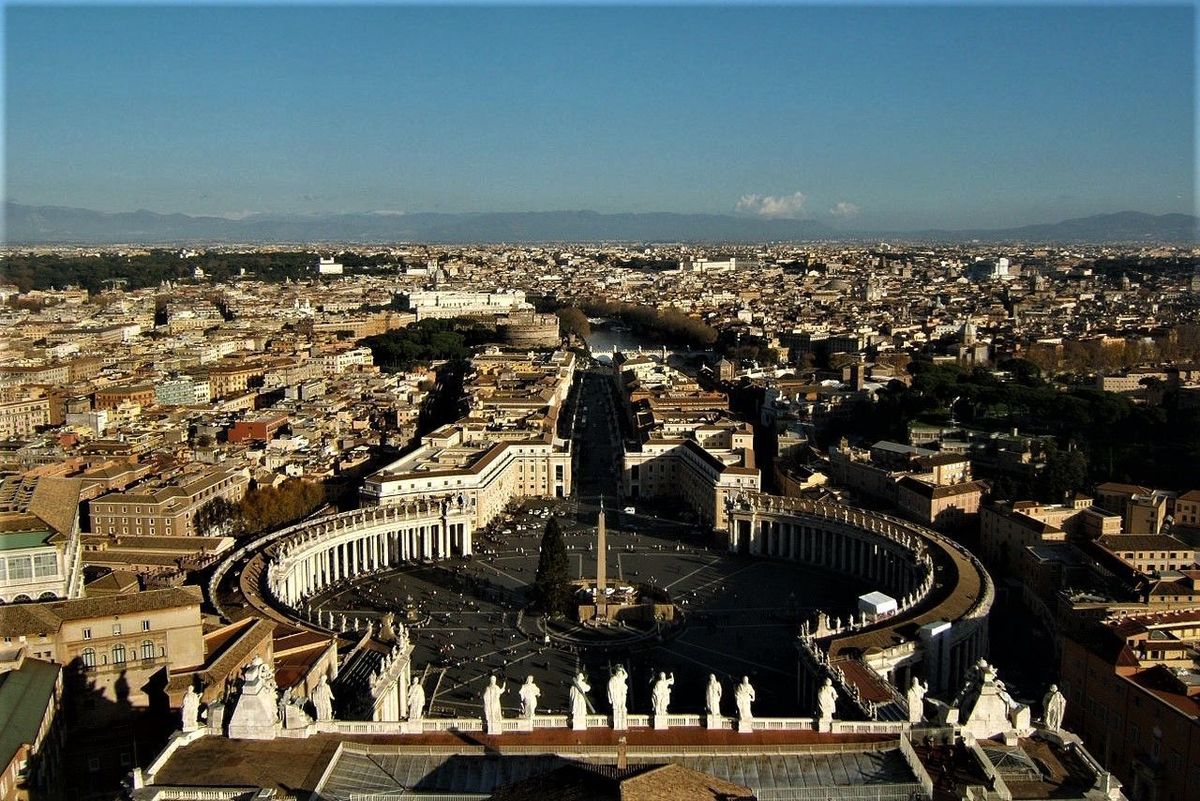 One of the most striking aspects of Pope Francis’s ministry is his constant insistence that “the Church must step outside herself,” and foster a “culture of encounter” with others.[1] The essential insight of this mission is the recognition that others “all have something in common with us: they are images of God, they are children of God.”[2] Pope Francis’s theological focus on dialogue and encounter presents a hermeneutic for interpreting and realizing the vision of the Church set out by the Second Vatican Council. In this regard, he is indebted to the theologians who preceded and shaped the Council, especially those who emphasized a return to the early Christian sources, a movement known as Ressourcement. Although he rarely utilizes direct quotations, Pope Francis’s words reflect the language and ethos of the ressourcement theologians. In particular, several key concepts and themes from the work of Henri de Lubac, a fellow Jesuit and explicitly recognized as a significant influence by Pope Francis, consistently reoccur in the pope’s theology.[3] According to de Lubac, humanity’s vocation is essentially communal. In his book Catholicism: Christ and the Common Destiny of Man, de Lubac explores the fundamentally social nature of Catholic Christianity and shows how, as described in a foreword by then-Cardinal Joseph Ratzinger, “The idea of community and universality . . . permeates and shapes all the individual elements of Faith’s content.”[4] Pope Francis, in his writings, homilies, addresses, and interviews, implicitly takes up de Lubac’s understanding of the communal and universal nature of Catholicism’s mission. For both Pope Francis and de Lubac, Catholicism reveals the slow, patient pedagogy of a God who is calling humanity to recover its lost unity—a unity that binds all together while bringing each individual to the fullness of his or her own existence.

Humanity’s unity has its origin in nature, for human beings are one on the basis of their creation in the Imago Dei. Since God is one, humanity is also one.[5] Therefore, a human being’s individual religious vocation is not simply a mystic ascent toward unity in God but also a call to community. This community comes into existence not through human striving but in response to the divine calling toward salvation in Christ. According to this understanding of humanity’s vocation, sin is both a “breach with God” and “at the same time a disruption of human unity.”[6] Through Original Sin separation entered into the created order, and through Christ and the Church original unity is restored. For Pope Francis, as for de Lubac, this restoration is inextricably linked to the logic of the Incarnation, for “true faith in the incarnate Son of God is inseparable from self-giving, from membership in the community, from service, from reconciliation with others. The Son of God, by becoming flesh, summoned us to the revolution of tenderness” (Evangelii Gaudium, §88). The Church is not only the means by which this “work of spiritual reunion” initiated by Christ in the Incarnation is completed, but also the very manifestation of that unity on earth.[7] Insofar as the Catholic Church “is sent by Jesus Christ as the sacrament of the salvation offered by God,” a sacrament of the “Mystical Body of Christ,” it is a foretaste of that community which is to come to completion in the new creation (EG §112).[8] Therefore, in the words of de Lubac, “Humanity is one, organically one by its divine structure; it is the Church’s mission to reveal to men that pristine unity that they have lost, to restore and complete it.”[9] The reform efforts under Pope Francis spring from this essential mission. In order to become a more efficacious sign of this transformation towards unity, the Church must continually be called to greater holiness and away from scandal. Thus, Pope Francis is not simply responding to the demands of the present historical moment but is seeking to fulfill the Church’s fundamental vocation. The manner in which this mission is accomplished depends upon the slow, patient development of the pedagogy of God.

The pedagogy of God is the gentle manner in which God calls humanity toward its common destiny, through “the whole history of the world.”[10] According to de Lubac, in the Scriptures “God inserts himself in history and so bestows on it a ‘religious consecration.’”[11] In his own way, Pope Francis recognizes the historical nature of the patient pedagogy of God when he notes that “God manifests himself in historical revelation, in history. Time initiates processes, and space crystallizes them. God is in history, in the processes.”[12] The social nature of salvation necessitates that history itself be the “interpreter between God and man.”[13] As such, Christianity understands time as linear, rather than cyclical. Salvation history is both progressively developing and continuous. Thus, the Old and the New Testaments form a coherent whole, and together testify to the Church.[14] The fall was a disruption; salvation is a reintegration. Thus, salvation cannot occur in isolation, but requires existence within a community. Pope Francis illustrates this idea clearly in his interview with America, “In the history of salvation, God has saved a people . . . No one is saved alone, as an isolated individual, but God attracts us looking at the complex web of relationships that take place in the human community. God enters into this dynamic.”[15] As such, the entirety of human history must attest to the grace of God working through it, and humanity’s rejection or acceptance of this grace.

De Lubac’s understanding of history necessarily touches on the Church’s relationship with other religions, which is itself a crucial and much commented upon aspect of Pope Francis’s ministry. Pope Francis is committed to the continuous development of interreligious dialogue, as evidenced by both his statements to religious leaders and his instigation of interreligious prayer. He sums up his perspective in Evangelii Gaudium: “An attitude of openness in truth and love must characterize the dialogue with the followers of non-Christian religions” (EG §250). This attitude extends to individuals of no religion as well. In a widely misinterpreted homily to Vatican employees at the Domus Santa Marta residence, Pope Francis said, “The Lord has redeemed all of us with the Blood of Christ: all of us, not just Catholics. Everyone! ‘Father, the atheists?’ Even the atheists. . . . We are created children in the likeness of God and the blood of Christ has redeemed us all.”[16] Rather than representing a departure from traditional Catholic teaching, as NPR and many media outlets would claim, this statement and others like it organically follow the development of de Lubac’s theology through the Second Vatican Council and the many contemporary ecumenical movements. In turn, de Lubac, “following the lead of the Fathers and the principles of St. Thomas,” states “that the grace of Christ is of universal application, and that no soul of good will lacks the concrete means of salvation.”[17] However, this in no way diminishes the dependence of the unity of the entire body of humanity upon the existence and continued growth of the Catholic Church.[18] In the Church alone salvation is found for all of humanity, because it is through the Church that humanity is united to itself and to God. Therefore, Catholicism is not one religion among many, but “religion itself.”[19] The Church takes up and transforms all that is “authentically human, whatever its origin,”[20] and she can lay claim to all that is good in creation. She is truly catholic, applying universally to the whole of humanity, while nonetheless engaged with the particularity of human culture and history.

The universality of Catholicism does not erase the particularity of the individual persons and cultures she assumes. Catholicity by its very nature is paradoxical, holding seeming opposites in creative tension. “The whole of dogma,” as de Lubac points out, is “but a series of paradoxes, disconcerting to natural reason and requiring not an impossible proof but reflective justification.”[21] The catholicity of Catholicism requires it to be a religion that transcends seemingly dichotomous categories. Therefore, though the ultimate destiny of humanity is unity, this destiny does not preclude the notion that each person in his or her particularity is called to an individual salvation. Unity and particularity are not opposites, but rather mutually enhance each other. Drawing on examples from nature, such as a collection of cells composing a unified organism, de Lubac concludes, “true union does not tend to dissolve into one another the beings that it brings together, but to bring them to completion by means of one another.”[22] In treating this paradox, Pope Francis attributes true unity to the action of the Holy Spirit. “Diversity must always be reconciled by the help of the Holy Spirit; he alone can raise up diversity, plurality, and multiplicity while at the same time bringing about unity” (EG §131). For both de Lubac and Pope Francis, this paradox is central to the whole mystery of humanity’s vocation. As “the image of the Word, which the incarnate Word restores and gives back to its glory, is ‘I myself’; it is also the other, every other. It is the aspect of me in which I coincide with every other man, it is the hallmark of our common origin and the summons to our common destiny. It is our very unity in God.”[23] It is precisely in one’s individual particularity, the very core of one’s existence where the soul touches God, that one is also bound to the rest of humanity. In order to fulfill our vocation, “we must walk united with our differences: there is no other way to become one. This is the way of Jesus.”[24] The Church, as communal and universal, reveals to humanity the image of God within itself. She holds on with longing, according to the promises of the Scriptures, to the hope that God will soon bring about the completed renewal of his image through her.

The theology of Henri de Lubac, implicitly taken up by Pope Francis, expertly negotiates the paradoxes inherent in humanity’s vocation, in order to show how Catholicism reveals the ultimate call to communion of human beings and the patient pedagogy of God that voices this call. His writings influenced the declarations of the Second Vatican Council on the role of the Church and the Church’s relationship to other religions, and therefore became an influential aspect of the modern consciousness of the Church. The growing pains of the Church in the half-century since the Council are in some sense the Church’s struggle toward an ever-greater recognition of her catholicity, her identity as a world Church not tied to any one culture. As the Pope “from the ends of the earth,”[25] Pope Francis is especially attentive to the traditional peripheries of the Catholic Church, geographically, culturally, and existentially. At the conclave that elected him, then Cardinal Bergoglio stated, “The next Pope . . . must be a man who, from the contemplation and adoration of Jesus Christ, helps the Church to go out to the existential peripheries”; to do otherwise would be to give in to a “spiritual worldliness”[26] (which, according to de Lubac, is the worst evil that can befall the Church). Pope Francis has lived out this call by fostering the “culture of encounter” in both word and action. Encounter does not deny the particularity of the individual who encounters. Rather, it transcends the limits of this particularity and completes it in the recognition that the individual shares in the divine unity. This call to encounter lies at the heart of the Catholic faith, motivating the believer to go out and witness, in the fullest sense of the word, both testifying to and observing the Good News: that Christ has renewed the image of God in the whole of humanity.

[4] Joseph Ratzinger [subsequent quotes from this book are from Henri de Lubac, unless otherwise noted], “Foreword” in Catholicism: Christ and the Common Destiny of Man, by Henri de Lubac. (San Francisco: Ignatius Press, 1988), 11.

Patrick Cruitt graduated from Notre Dame with degrees in psychology and theology (2014), and is now a Ph.D. student in clinical psychology at Washington University in St. Louis.

Was Vatican II a Bad Seed? 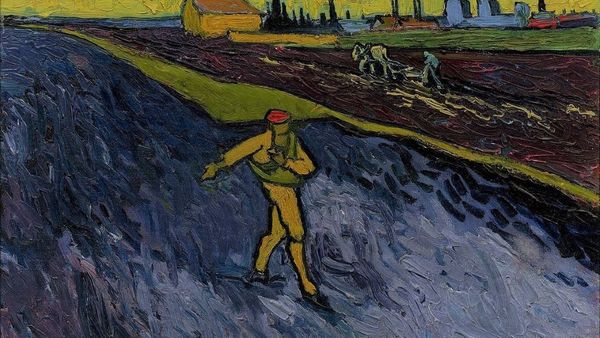