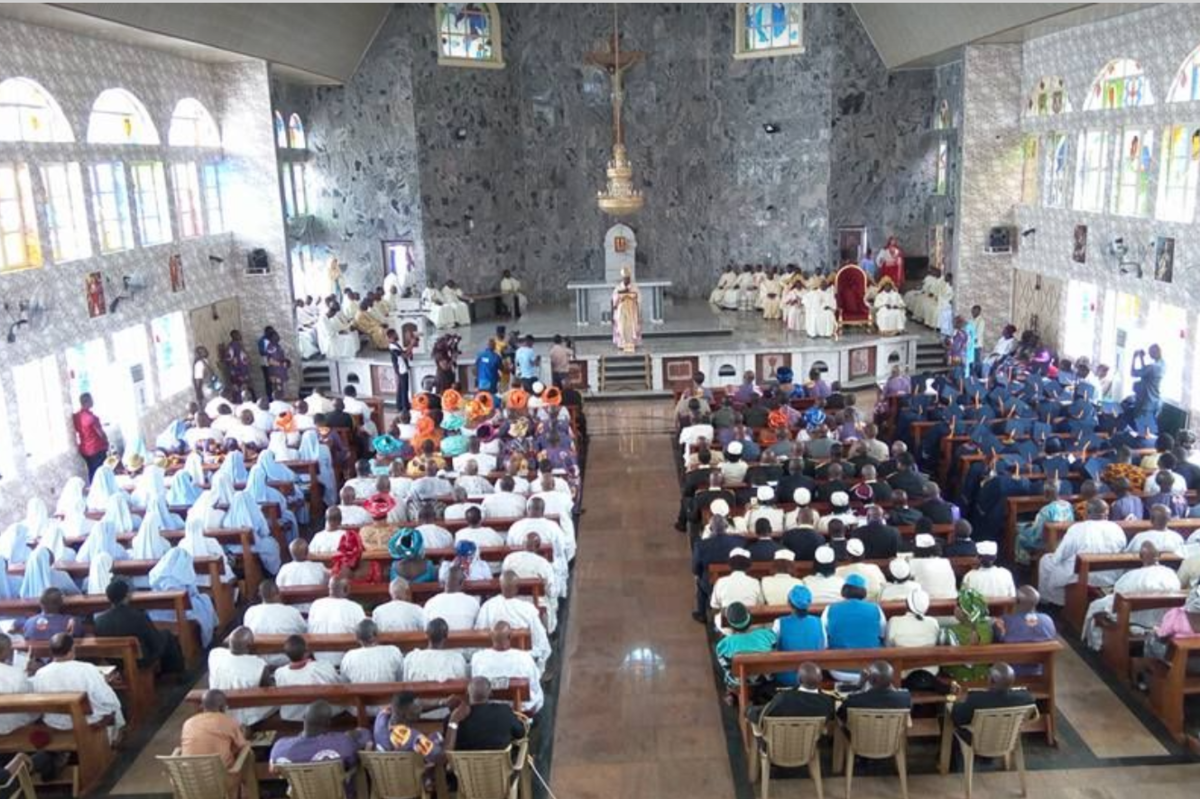 Catholic missionary efforts on the shores of Nigeria began with an initial attempt by Portuguese missionaries in the 15th and 16th centuries. Though their first attempt was unsuccessful, these missionaries persisted and in the 19th Century, there was a successful expansion of Christian missions in Nigeria. [1]  By the 1800's, various parts of Nigeria had a rooted Catholic Mission presence. In Southeast Nigeria, Igbo Catholicism began with the arrival of Father Lutz at Onitsha in 1885, and thrived with the efforts of Bishop Joseph Shanahan (1905-1931), and Archbishop Charles Heerey (1927-1967). The mission was dire, as these men had no knowledge of Igbo (the language the people spoke) and were unable to grasp the deep and sui generis religiosity embedded in the cultural life of the people. With resilience and perseverance however, the missionaries ultimately succeeded in sowing the seed of the new faith in the hearts of a people that have since become harbingers of Catholicism in parts far beyond Igboland.

In general, the advent of Catholicism in Igboland is divided into three phases. The first phase from 1885 to 1900 began with the introduction of missionary policies and methods through contact with the Igbo people, their religion and culture. During the second phase (1900-1905) the missionaries focused on implementing missionary apostolates, such as the building of schools and hospitals, and the establishment of mission churches in major Igbo towns.  The third phase (1931-1967), witnessed the establishment and growth of Catholicism with the consolidation of all Catholic schools and hospitals in the region.[2]

By and by, converts became involved in the celebration of the liturgy and other church activities. And with the involvement of converts came the need for catechetical manuals.  Thus, the liturgical apostolate began in the early 1900's as the missionaries tried to produce catechetical texts, the Bible, and prayer books for instruction in the faith. Due to the paucity of a reading public, there were few available liturgical texts initially. In essence, the faith was written on the hearts of the people through memorization and the repetitive recitation or singing of prayers, hymns, and catechetical responses. In building the Igbo Catholic community, liturgy and catechesis became the tools for formation in the faith. As time went on, more liturgical texts in the vernacular began to appear, as the Igbo people became more literate.


Liturgical innovations and renewal in Igboland began between 1900-1977 with the production of Igbo liturgical, biblical, and catechetical Texts. Fr. Aime Ganot, in 1901, translated into Igbo the first liturgical catechetical text known as Katekismi Igbo (Igbo catechism).[3] Another version called the Katekisma Nk' Okwukwe Nzuko Katolik n' Asusu Igbo (Catechism of the Catholic Faith in the Igbo Language), containing the Catechism proper, and a number of prayers, was perhaps the first extensive work published in Igbo language by the missionaries. It was published in 1903.[4] An Igbo Catholic Prayer and Hymn Book, titled Akwukwuo Ekpele na Ukwe ndi Katolik n'onu Igbo, was produced in 1922,[5] giving rise to more translations of other liturgical-catechetical texts that came to be used throughout the region. Although the missionaries struggled mightily with Igbo phonology, as evident in their barely adequate translations, their efforts nonetheless was the foundation for greater things to come. By the 1940's, with an increasing number of educated Igbo people, biblical texts in the Igbo language began to appear, with works such as Ndu Dinwenu Anyi Jesu Kristi (Life of Our Lord Jesus Christ), Mary Nne Jesu (Mary The Mother of Jesus), and The Gospels of St. Matthew and St. Mark in Igbo Language.  Baibul Nso Nhazi Katolik (The Catholic Holy Bible), published in 2000, is the most recent translation of the English Catholic Bible into Igbo language.

Following the Second Vatican Council, which authorized the use of vernacular languages in the Mass, the 1970s saw the translation and printing of the Roman Missal in Igbo, titled Usoro Emume Nke Missa (The Order of Mass).[6]  By 1977, other liturgical texts, such as the texts for the celebration of the sacraments: Usoro Emume Sacramenti Isaa (The Order of the Seven Sacraments), Katekismi Igbo (Igbo Catechism), and Katekisma Nk’Okwukwe Nzuko Katolik N’Asusu Igbo (Catechism of the Catholic Faith in Igbo Language),[7] were produced. In 1983, a two-volume translation of the Sunday readings and prayers, titled Usoro Emume Nke Izu Uka Di Aso (Order of Holy Week Ceremonies), was produced by the Igbo-speaking Bishops of Nigeria. Subsequently, in 1996, a Missal containing the Sunday, Solemnities, and Holy Week liturgies was translated and compiled in one edition known as Akwukwo Misa Nke Ubochi Sonde Nile, Nke Ubochi Nnukwu Emume Nile, Na Nke Izu-Uka Di Aso.[8] Thenceforth, the translation of liturgical texts in Igbo has continued to flourish in earnest.


Igbo Liturgical hymns and songs began to emerge in the 1950s with prominent teacher-musicians, such as S.N. C. Obi, who inserted Igbo words to pre-existing English tunes for use in liturgical celebrations. His popular hymns, Ekwelum Nkwa na Mbosi Baptisma (My Baptismal Promise) and Chekwube na Chukwu (Trust in God), which were scripturally and theologically sound in content and meaning, were famous among Igbo Catholics.[9] Seminaries became schools of liturgical innovation and renewal, as talented seminarians in Bigard Memorial Seminary, Enugu, composed, transposed, and compiled Igbo hymns that were integrated into the liturgy.  Hymns like Nwanyi Mutara Nwa n'enwe Anuri (A New Mother Rejoices) and Jesu Kristi bia k'ibulu Achicha na Nmaya (Come Lord Jesus Christ and Be Our Bread and Wine) became popular between 1962 and 1963.[10] There was also the initiative to compile and publish a Catholic Igbo hymn book in the late 1960s.  This project finally came to fruition in 1982 with the publication of the New Catholic Igbo Hymn Book, which contained hymns for various parts of the Mass, Eucharistic Benediction, and various liturgical seasons. [11]

Numerous Igbo composers emerged in the 1970s, with composers such as Fr. Cyril Ezenduka, who composed new tunes for the Common of the Mass, Missa Chukwuemeka (Mass of God's Beneficence) and Missa Ihunanya (Mass of Love). His classical compositions, Lee Nnukwu Ukochukwu (Behold the High Priest) and I bu Ukochukwu Ebebe (You are a priest forever) are widely known and still used throughout Igboland.[12] Composers, such as Fathers Theophilus Okere, Lambert Ejiofor, Raymond Arazu, Fred Uche, Jim madu, John Bosco Akam, and a host of others, became prominent in promoting congregational singing of Igbo Catholic liturgical hymns by the faithful.[13] Today, Sir Jude “Ancestor” Nnam, is perhaps the most prolific Igbo liturgical composer, as he as written numerous celebrated Igbo hymns presently used in the liturgy across Igboland.[14] These numerous Igbo music compositions and liturgical-catechetical texts are not only used in the Motherland, but also in Igbo Catholic communities dispersed around the globe.

Today, Igbo Catholicism prides itself on producing Blessed Cyprian Iwene Tansi, the first West African Catholic to be beatified, and having many Catholic parishes teeming with parishioners. It also prides itself on having several seminaries, convents, religious houses, and monasteries full of men or women ready to play a principal role in the new evangelization of the Global Church. The progress of Catholicism and liturgical inculturation in Igboland motivates more research on how to keep the Christian faith alive among a people whose faith and love of the Gospel spurs their daily living, a people considered as “natural Catholics” and whose religiosity and everyday life are inseparable.

Sr. Mary Reginald Anibueze, DDL, has a Ph.D. in Theology, with specialty in Liturgical Studies, from the University of Notre Dame, Indiana. Her research interests are in Ritual Studies, Modern Liturgy, African Theology, Indigenous Religion, and Global Christianity.