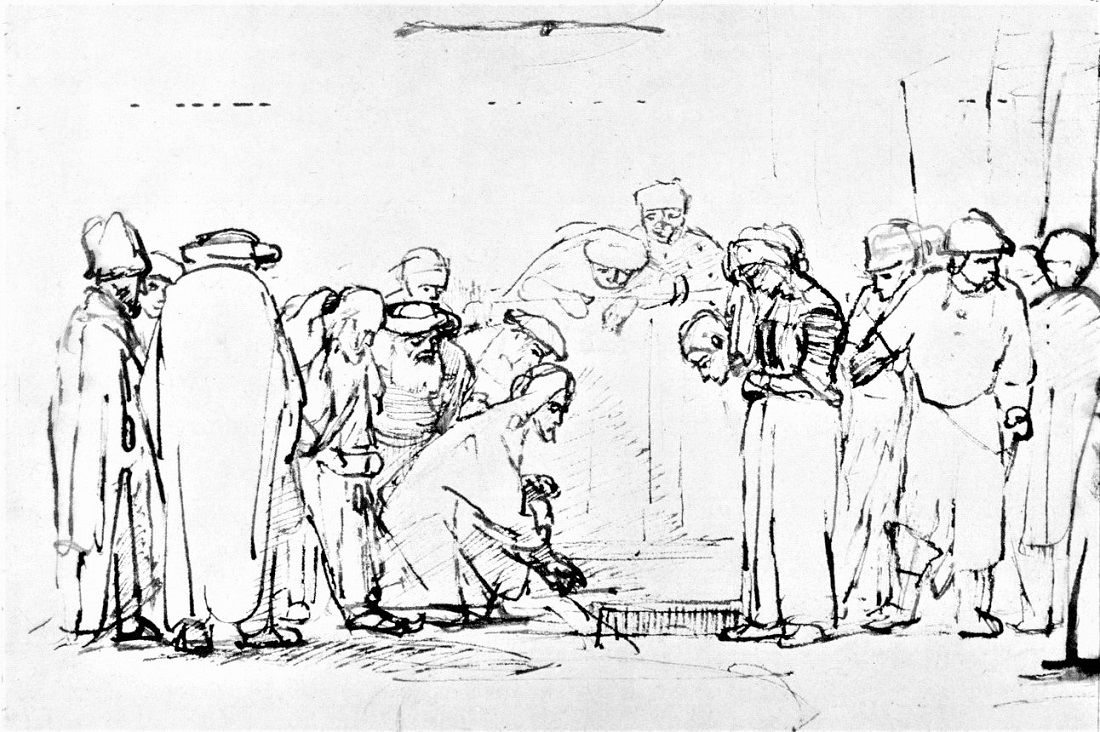 How do you read it? This question, posed to Jesus repeatedly throughout the Gospels, reminds us that interpretation of God’s Law was fundamental to Jesus’s life as a 1st century Jewish rabbi. It remains important today in the Church and no less controversial, as could be seen from the difficult questions on canon law and scriptural interpretation which have rocked the Catholic Church in the past years. Many vexed questions beat at the heart of these ecclesial disputes, but surely the question of how to interpret the Scriptures and ecclesial law in a way that respects both God’s justice and mercy reverberates beneath them all.

As we turn inward for self-examination this Lent and seek to find God’s justice and mercy in our own lives too, the question of interpretation becomes personally paramount. To find our way, we can do no better in reflecting on this than to look at how Jesus himself held together the requirements for both justice and mercy in the interpretation of God’s Law. Neither can be omitted. As Pope Francis wrote in the bull of indiction for the Year of Mercy: “God does not deny justice. He rather envelops it and surpasses it with an even greater event in which we experience love as the foundation of true justice.”

In John’s Gospel we find a brilliant example of just how Jesus held together justice and mercy in that one foundational act of love. I speak of the story of the woman caught in adultery, one of Pope Francis’ favorites, and one which he has mentioned repeatedly in his addresses during the Jubilee Year. The scene begins with Jesus teaching in the Temple. The scribes and Pharisees set a woman—purportedly “caught in the very act”—before Jesus and begin to question him. “Teacher,” they ask, “Moses says we ought to stone people such as her; so what do you say?”

That Jesus’s opponents ask him how he reads the passage tells us that its interpretation was not clear cut in Jesus’s time—not only because Roman rule made it impossible for the death penalty to be executed in Israel, but also because the teaching was likely a source of difficulty for first century Jews, if the testimony of the Mishnah can be read as indicative of the status quaestionis in the 1st century.

It has been oft noted in connection with this Gospel story that the Law (Lev 20:10) states that both the adulteress and the adulterer should be put to death. The conspicuous absence of the male offending party suggests to us that the scribes and Pharisees are not so much interested here in upholding the letter of the law as they are in showing Jesus up as a threatening, alternative interpretive authority. The woman simply happens to be a useful means to this end—a point that the narrator suggests by repeating twice that the woman was set “in the middle of them,” as if she were the terrain on which they would fight their exegetical battle with Jesus.

In one of the most enigmatic actions recorded in the Gospels, Jesus responds by ignoring their question and instead ducking to the ground in order to write in the dirt. The author of this story tells us nothing explicit concerning the content of what Jesus wrote, and the Gospel’s immediate context cannot help us decipher the writing in the dirt. For, as scholars have known for some time now, this passage is likely not original to John’s Gospel.

And so, impatient with Jesus’s random doodlings, the controversialists continue to demand an answer from Jesus. At last he raises himself up and utters his disarming interpretation of the law: “Let him who is without sin cast the first stone at her.” While affirmatively repeating the Torah’s command that those who testify to a capital crime must be the first to begin the process of execution by stoning, Jesus nonetheless upends the command in order to radically implicate the witnesses to the sin in the crime of the woman they testify against: if you carry out the sentence of death, you arrogate to yourself the prerogative of the God of Israel—pure holiness. With this radical re-reading of the Law Jesus takes vengeance and puts it squarely back in the hands of the Lord, to whom it belongs.

But how does Jesus justify this re-reading? What happens next in the story can be easily over-looked, though it holds, I think, an interpretive key to the entire story. After commanding the sinless to cast the first stone, Jesus drops to the ground again and writes again in the dirt. It is only at this point that the narrator tells us that the scribes and Pharisees left the place, “beginning with the elders among them.”

Why do Jesus’s opponents leave defeated? Have they not won the argument, proving that Jesus is in fact the dangerously lax interpreter of Scripture that they suspected him to be? And yet the author of the passage clearly intends for us to understand Jesus as the winner. The answer may be found in Jesus’ writings in the dirt.

Though the author gives us no explicit information on what Jesus wrote, there is reason to think that Jesus bends low to write down the Ten Commandments. Two clues point in this direction. First, there is the detail that Jesus writes with his finger. This is likely an allusion to the two stone tablets containing the Ten Commandments that God delivered to Moses on Sinai, tablets “written by the finger of God” (Ex 31:18). But there is another hint: those stone tablets were given to Moses not once, but twice, and precisely because of the sins of the children of Israel. We will recall that it was exactly as God was giving the Law to Moses that the people of Israel were its very first ordinance by making and worshiping the golden calf. Moses broke the first tablets of the Law in anger, necessitating a second set to come from God’s hand once again.

Is it possible this is why the narrator does not tell us that Jesus’s opponents left the scene until Jesus writes in the ground a second time? If Jesus was writing the Ten Commandments in the dirt, the command against adultery would have been clearly visible there, as well as the other commandments of which the present company would have, no doubt, broken at least one. Jesus’s reminder of the Law and our universal complicity in breaking it reminds his audience—and us—that those who would be judges of the Law and others stand always-already guilty before that same Law. So judge carefully.

And it is well to note that it was the elders who first left the scene after the cryptic scene of writing. Perhaps their departure was quicker because they knew more acutely than the young present how far they themselves had fallen from the Law. If the death penalty were to be enacted as they wished, there might be no more elders in Israel.

Furthermore, it is not simply an accident of situation that causes Jesus to “stoop down,” to condescend to the earth to write the Law. The giving of the Law was itself an act of divine mercy, a gift which we needed, and continue to need, in our sinful state. But Jesus writes the law not on stone this time, but on the ground, on the very dirt from which we were gathered in our first creation.

Does this softer medium imply a relaxation of the positive command of the law? Not so, for Jesus’s parting words to the woman are “go and sin no more.” By his writing the commandments in the dirt Jesus teaches us instead that the Law points us back to the ideal for which we were originally created: a life of justice. In the acquittal of the woman, this ideal of justice is maintained, insofar as we understand justice to be primarily concerned with what is owed to God and to neighbor and only secondarily and derivatively about recompense and retribution. Jesus’s mercy proves not to be that false mercy which mitigates our offense so as to produce a banal self-comfort. Instead, it is the creation of a space free from judgment for self-reflection, honesty, and repentance.

The passage ends with Jesus showing her who “stands in the middle” that her accusers are gone. He asks her with simplicity: “Woman, where are they? No one condemns you.” Long ago, after Eve had been cast low by the wiles of the Accuser and then had the finger pointed at her by her husband, God sought them both out and asked the new sinners, “Where are you?”

Now God in Christ asks the sinful woman, “Where is your accuser?” “No one accuses me,” she can finally respond. No longer does Adam stand by her side, assigning blame for his fall. Eve will finally have her say, apart from the circle of condemnation. And no longer does this woman stand between Jesus and those men who would use the commandments of the Law as so many stones with which to kill her. Now it is only the woman and Jesus, the giver and interpreter of the Law. “Neither do I condemn you.”

This story serves as a synecdoche to Jesus’s entire interpretive project as a Jewish rabbi. It also lives on as an example for Christ’s ministers in his Church whose task and privilege is to interpret the oracles of God for God’s people. What is essential for us in this Lent is to remember that neither mercy nor justice are relaxed, but that they always meet in the person of Jesus who speaks to all the accused his Good News.

Only Jesus can teach the Church how to interpret God’s law, for it is he—so much more than we, heavy with hearts of stone—who knows our frailty, who remembers that we are dust. 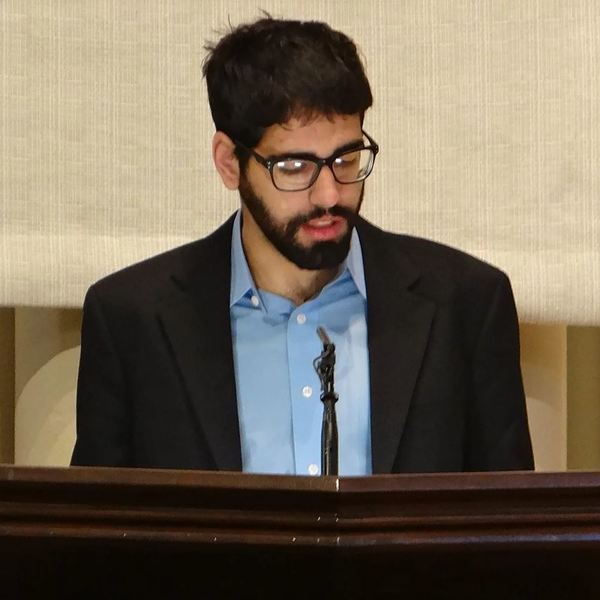 Roberto J. De La Noval is a University of Notre Dame PhD in theology who translates Russian theological texts. He is also a freelance commentator on theology, philosophy, and pop culture whose online writings can be found here.