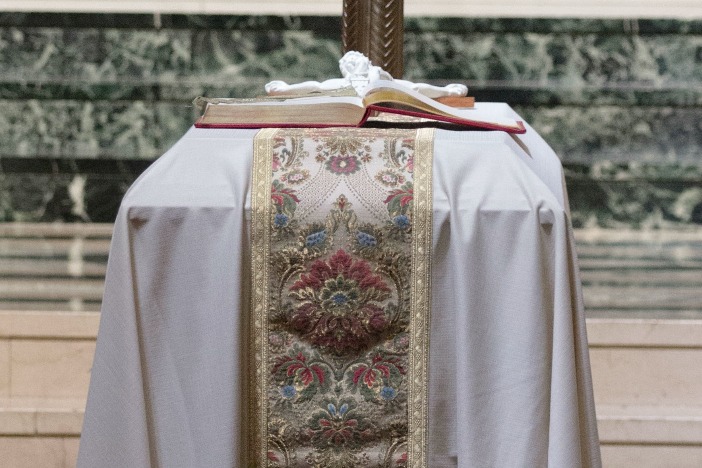 “How was the Mass?” Many friends asked me this question upon returning from my grandmother’s funeral this past January. The most authentic answer I could give people was “Comfortable.” Although my Memere (a term of endearment for my Canadian-born grandmother) was 90 years old when she returned to the Lord, the length and quality of her life did not remove the painful void caused by her death. I frequently categorized my Memere to any and everyone as my favorite person in the world. This is an oversimplified way of attempting to explain an ontological bond that I always fail to describe in words. Because I was born on my Memere’s 61st birthday, she always mused: “Your mom was too busy to send a card that day, but you were the best gift I could have ever received.” I often perpetuated the joke to my cousins, “I was born on her birthday. Obviously I’m the favorite.” My cousins surprisingly never objected. That’s because in many ways the connection me and my Mem had couldn’t be replicated. Because she had suffered from dementia in the last five years of her life, I anticipated my Memere's death for some time; so when I got the call that she had stopped eating and drinking there was a sense of relief that she could finally be freed from the shackles of a confusion-ridden mind. Yet there was also this very real feeling that my world was about to change drastically.

When I look back on our relationship, I remember three things most fondly about my Memere: her hands, her hospitality, and her love for stories. She had a tendency to flatten her hands, palms down, as if pressing against the air. She would rustle her fingers slightly to straighten out her wedding ring and would proceed to let out a shallow sigh, “Old hands.” “No! Your hands are beautiful.” I always insisted. And then she would steal one of my hands, admire its youth and hold it in hers. This ritual occurred more times than I can remember, even up until her final days.

My memory of her hospitality has mostly to do with her incredible cooking and her incessant need to always feed someone. You would think she was Italian, not French Canadian. Anytime I visited her she prepared something special, not fancy special, but always something made in love. Poached eggs, oatmeal chocolate chip cookies, homemade applesauce or jam, zucchini bread—how I loved her zucchini bread. Nothing brought her more joy than sharing a culinary labor of love with those she loved.

While cooking—because it seemed like she never left the kitchen—she loved to relay stories. Not fictional stories or gossiping stories, but stories stored away in her memory of her eleven siblings, her three children, her seven grandchildren, her beloved husband. She repeated stories again and again and they never got old. Each time she told a story about our family it was renewed in those of us who listened; the memories were alive in her retelling.

You might wonder how all of this relates to the Mass. It wasn’t only because I am a practicing Catholic that the ritual of her funeral liturgy was comforting, although that was part of it. Having been a nominal Catholic for most of my young life and discovering the value of the Mass at an older age, I have come to appreciate the repetition or even redundancy of the Mass. Isn’t it a sign of a rooted relationship when you are so comfortable you are perhaps bored with another person? So, yes, the Mass of Christian Burial was comfortable because I know the ritual of the liturgy well. I know the movements and the words and the hymns. Yet, the fundamental reason why this funeral Mass was so comfortable for me was because it was the first time I was with my grandmother since she died. It was the first time I encountered my Memere in a new way, as a member of the Communion of Saints gathered around the table of the Lord. She was present in the Presence of the Lord, just as I was.

My Memere was a faithful Catholic, and in many ways the mother of my faith. Although not eating and drinking in her final days, I requested a priest not only for the Sacrament of Anointing but also Viaticum—final Eucharist. I had brought my Memere Eucharist at home before and, despite her dementia, she entered deeply into prayer each time she received. She had not eaten or taken a drink in three days, but she willingly took Viaticum the night before she died. This gave me particular confidence that she was indeed with our family as we sent her to her final resting place.

After her funeral Mass, the sorrow of losing her really set in. In those next few days and weeks, walking in a world that felt a bit less full, I wanted to return to the comfort of the Mass. It was in listening to Christ come alive in the Word that I was reminded, through the stories of the family of Israel, of the stories my Memere kept alive for my family. It was in the preparation of the altar when I remembered the loving meals she prepared at her table each time we came to her home. It was in the reception of the Eucharist, being folded into the Divine Majesty, that I was able to be with her—for just a moment—to hold her hands as I so often did. The Mass brought me, and is still bringing me, great comfort, not only because of its familiar rhythms, but because each time I join in worship at the House of the Lord I know I am also in my Memere’s house, her transformed home—the place He prepared for her and has taken her to Himself.

Allyse Gruslin is a third year student in the Master of Divinity program at the University of Notre Dame.