In the Mojave Desert, palm trees flank Las Vegas’ Guardian Angel Cathedral, a smallish A-frame church that is almost all gray-brown segmented roof, reminiscent of a common backyard armor-plated roly-poly sow bug (actually an isopod terrestrial crustacean of the Armadillidiidae family) found in the dark moist environment underneath rocks. The cathedral is almost as inconspicuous, just a block east of The Strip of Las Vegas Boulevard and low lying compared to its 25 story casino-hotel neighbor across the street to the south. Some people chuckle in surprise to learn that Las Vegas is a diocese with a cathedral, somehow thinking Sin City’s constitutional vices of gambling, prostitution, strip clubs, and easy marriage and divorce are no place for the holiness of the Church. But where else should the Gospel be proclaimed? It is not for the righteous but for sinners. The light of Christ is to shine in the darkened interior of hearts and casinos in the sun-soaked desert. It is to open the eyes of these citizens to a true vision of God, the human person, and creation.

The dissonance between sin and grace in relation to the dominant Las Vegas culture includes its prodigality in an extreme desert ecoregion. The Church has proclaimed for millennia the good news of Jesus Christ for conversion from vice and sin, and now it is a herald of ecological conversion, namely that Christians recognize that care for the earth is not accidental but intrinsic to being disciples of Jesus Christ.

Within the cathedral, the twelve triangular stained glass windows, created by Hungarian artist Isabel Piczek, depict in mystical realism the Stations of the Cross, as well as the New Man, and cosmic Christology. These windows preach directly against the false anthropology and ecology promoted by Las Vegas. Jesus is crucified by three figures, each holding a nail labelled in blood-red—pride, lust, or flesh—the threefold concupiscence identified by St. John in his first letter (2:16). Surrounding the fallen Jesus are stern masculine figures, alienated from neighbor but befriending their coins, with labels “wealth” and “status.” The hoarding, grasping man of “greed” grabs what he can for himself, unconcerned with the lowly man before him in “misery.” These figures are the visual counterpoint to the truth of love of neighbor and Catholic Social Teaching’s pillars of the common good and universal destination of goods. Eyes captivated by present gain and satisfaction, they proudly seek to make a name for themselves in the Tower of Vegas. This lure of sin in the human heart that alienates us from God and one another is also the basis for the ecological crisis caused by our alienation from the created natural world.

With the turn to the human subject over the last several centuries, God’s single plan of salvation in the divine economy was unraveled into separated strands of creation and redemption. Creation was reduced to nature, which was left to the scientists and their inquiry, and the Church, then, focused exclusively on human history and redemption in Christ. The last half century has seen an intensifying papal concern to restore creation and redemption to the one divine economy. Pope Francis calls for a rediscovery of God as Creator (Laudato Si’, §75). He wants turn the human heart away from the theater of avaricious and meretricious entertainment to the theater of creation where in wonder they would praise and glorify God the Creator. Christians are not only citizens of the civic and social and cultural community but are ecclesiastical citizens. Catholics of southern Nevada belong to the Church or diocese of Las Vegas, that portion of the people of God entrusted to a bishop who shepherds his flock, gathering them together “through the Gospel and the Eucharist in the Holy Spirit” (Christus Dominus, §11). And, these Christians are also ecological citizens of the ecosystem of the Mojave Desert.

This threefold citizenship requires a restored vision to understand one’s own identity and mission as a Christian. God has created us and sent his Son so that we might have life to the fullest. Such human flourishing requires attention to our true nature as creatures made in the image of God and to our intrinsic relationality to God, our own selves, one another, and the created cosmos. A true development of the human community demands a response to all of those conditions and structures that dehumanize: poverty, hunger, sickness, violence, corruption, oppression, slavery, ignorance, and ecological degradation. Pope Francis emphasizes that social and environmental crises are not separate but one crisis. Integral ecology is foremost the broader vision of reality that sees all the diverse interrelated dimensions of the problems before us. “Integral ecology” emerges from prior concepts such as “authentic development”, “integral humanism”, and “integral human development.” Ecology can no longer be a mere backdrop to our lives, but it must be brought to the forefront as essentially interconnected with every other dimension of our lives. Integral ecology unites ecology proper with economic, social, cultural, and human ecologies. Piecemeal approaches to our global problems are insufficient. “Strategies for a solution demand an integrated approach to combating poverty, restoring dignity to the excluded, and at the same time protecting nature” (LS §139).

Acquiring such a broader vision of integral ecology requires that creation be seen as intrinsic to God’s plan of salvation. Instead of the monocular focus on Christ the redeemer of humankind, Christians must recover a binocular vision of creation and redemption as one. St. Paul wrote to the Colossians of this unity in the cosmic Christ. Christ is the creator: “all things were created through him and for him. He is before all things, and in him all things hold together” (1:16-17). But the risen Jesus is also the redeemer.

He is the head of the body, the church. He is the beginning, the firstborn from the dead, that in all things he himself might be preeminent. For in him all the fullness was pleased to dwell, and through him to reconcile all things for him, making peace by the blood of his cross [through him], whether those on earth or those in heaven (1:17-20).

Piczek’s cathedral window entitled “The Mask of Reality” portrays participation in the cosmic Christ. We are tempted to focus our attention, like the Harlequin on this passing world, to dwell in the city of man, fascinated by the lights and sounds our own accomplishments as well as by sensual attractions and lure of financial gain that corrupt our human ecology. However, humankind is to reach with Mary into the mystery of the burning heart of love of the risen Christ. Piczek depicts our life’s activities—the dignity of the laborer providing goods and value, the scientist studying and communicating the secrets of a wondrous world, the teacher pondering truth, the nurse caring for the sick, the farmer working the land and providing food for the hungry and the Eucharist, and the poet caught up in beauty. Piczek artistically presents an integrated view of authentically-human Christian life in a cosmic setting that corresponds to an integral ecology proclaimed by Pope Francis.

Editorial Note: Throughout the month of October Church Life Journal will explore the sanctity of life and the hospitable imagination. What we mean by the hospitable imagination is the ecclesial formation of a way of seeing the world that is more spacious and welcoming. It is a way of seeing that recognizes the inherent sanctity of life and seeks to heal the perceived division between life issues and social justice issues. Catholic Social Teaching teaches us that a radical hospitality for life at all its stages and solidarity with the weak is cruciform. As our authors explore the various dimensions of the hospitable imagination (please click the link for a list of the posts), we invite you to think along with us. 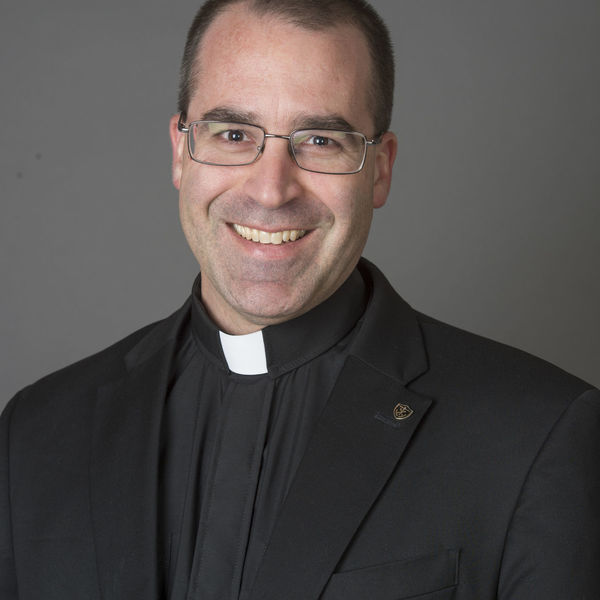 Fr. Terry Ehrman, C.S.C. is a Holy Cross priest and the assistant director for life sciences research and outreach at the Center for Theology, Science, and Human Flourishing at the University of Notre Dame. Trained as an aquatic ecologist and systematic theologian, he studies the relationship between science and theology, particularly in the area of theological anthropology as it relates to evolution and ecology.