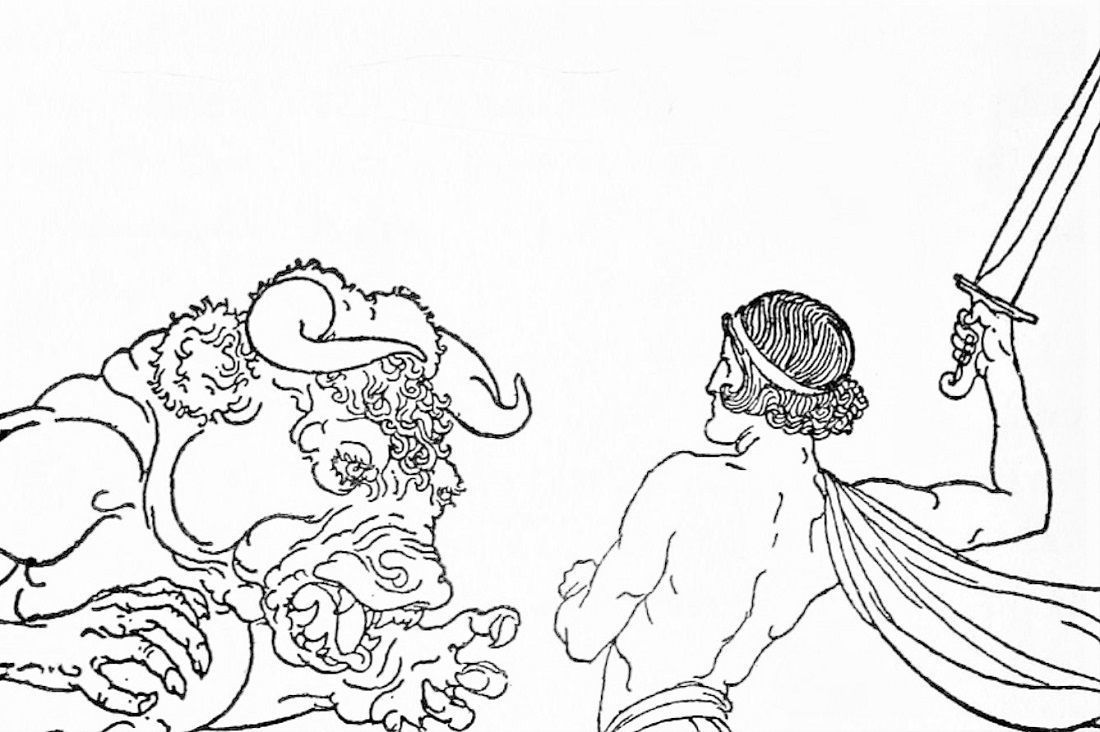 Ancient Greek literature is sprinkled with the living venturing into the realm of the dead and paying or not paying the price exacted for the violation of this most absolute of boundaries, that is, to become one with the dead or so touched by death that you are forever beyond the living. If one of the Greek heroes who does not pay the price is Theseus, the hero who escapes the labyrinth at Knossos and kills the Minotaur, the very same hero who founds Athens, another is Pirithous, who is totally not up to this reckless venture, yet accompanies the accomplished hero Theseus, only to pay the ultimate price. In a sense, Theseus and Pirithous double the transgression by having as their aim the stealing of Persephone, the daughter of Hades. This has the meaning of an escalation in which the aim is no longer simply to be an exception to that which by definition is exceptionless, but in principle to command death from the vantage point of an exuberant and triumphant life.

The trespass of the boundary does not go well for Theseus and Pirithous. Both fall foul of a ruse of Hades and get stuck in the chair of forgetting, which doubles down the dissipation of subjectivity that is the state of the dead. Theseus, however, is rescued by Heracles, another death-traveler, but leaves behind his less than heroic side-kick Pirithous in the gloom and forever in a semi-petrified state. The form of petrification is just as important as the fact. The petrification of Pirithous is of his core, not his extremities; specifically he is unable to move because his buttocks have become one with the stone that holds him to the chair on which he and Theseus sat. This may be one of the few moments in Greek literature in which the descent into the realm of the dead operates in terms more nearly of comedy than tragedy. In his ridiculous predicament Pirithous falls outside the scope of our admiration and even our pity. We are inclined to laugh; indeed, laughter is almost irresistible. The fact that it is his buttocks that are encased suggest at once that Pirithous has been reverse engineered into the condition of a satyr, but one whose sexuality is rendered safe by a petrification. This in turn makes one wonder about Theseus, the hero who is identified with neither sexuality nor its abortion, and who is fated to be a cheat and an artificer, as well as the one who left his worse half behind.

This has always been one of my favorite Greek myths. It is a doubled story in that it is a story at once of a hero and an anti-hero. And it is a story of a double in that this couple, who are related by blood, seem to be mirror images of each other, with Pirithous seemingly been cast as the necessary price to be paid for the transgression of the boundary. It admits of being looked at in two ways: on the one hand, Pirithous is the fool who pays the price for the venture that was Theseus’s obscenely prideful idea. On the other, with just a little prompting from psychoanalysis, Pirithous is the shadow cast by the hero Theseus, the price of mortification exacted on any hero for daring to descend into Hades. Pirithous is the price that makes every hero also a victim; after such a journey the hero is never quite the same. As the Ulysses myth shows, perhaps this difference is intrinsic to the very form of the hero. Speaking very generally it can be said that in Greek myth death always exercises a kind of counter-violence on the heroes that would traverse its different geography. The counter-violence is particularly exacting given Theseus’s and Pirithous’s shared ambition to dominate death. The secondary hero, Pirithous, is not only denuded of all glamor, he is denuded of pathos: he becomes the figure of the forgetting that leaves everything behind except forgetting.

An interesting question to ask regarding this “myth” is what would or could two of our more original modern commentators on the Greeks, Nietzsche and Weil, make of it, despite the fact that neither actually speak to it. My guess is that Nietzsche would make nothing of it, given his commitment to the heroic and the aristocratic. For him, the composition of this pair in Hades is not just complex, but fractured. The panel with Theseus speaks to the dignity of tragedy, whereas the panel with Pirithous speaks of farce. For Nietzsche, the composition would be in the strict sense a composite of two different mythic strata, with the base being supplied by the heroic myth of Theseus on which is laid the more self-conscious myth of Pirithous, the anti-hero, who can only be a construct of a regime of reason calculating benefits and loss. For someone like Nietzsche, a Theseus can teach us something; his companion absolutely nothing. And if Pirithous did manage to teach us something, say teach us our essential limits, then he would teach us the wrong thing. Pirithous’s semi-petrification adds to the erasing that is the general economy of the dead who lose language, the power to name, and the power to recognize their name as anything more than a flatus. The myth of this descent into the realm of the dead does not allow us access to the psyche of Pirithous. Thus, we can neither mourn with him nor bear his loss: he is more enigma than mystery, more sphinx than a human being with whom we can identify.

Nietzsche in general promotes a pagan version of the Gospel imperative of let the dead bury the dead. Pirithous is a human being who is moving towards the condition of a thing, an object of disgust which we should avoid and from which we should cleanse ourselves. Pirithous is that which in humanity is reduced to the inhuman rather than elevated to the superhuman. For Nietzsche, Pirithous is precisely non-Greek. He is that which retards or does not belong in the driving, stretching, and reaching that defines human being that the Pre-Socratics grant to us and of which we sometimes find an echo in Aristotle. Spoken of in terms of alchemy, Pirithous would be caput mortuum, the befouled and blackened remains that accompany the construction of hero, the true lapis philosophorum that is Theseus, who is the move beyond, the transition devoutly to be wished of Zarathustra. Of such as Pirithous it can safely be said as in Greek tragedy: “better he were not born.”

In contrast, given her profound sympathies for mute suffering and subjectivities reduced to the condition of a cipher, Weil, the advocate of the suppliants, the interpreter of a Prometheus who is not all Sturm und Drang, the philosopher of petrification and pure necessity, is in a far better situation to understand Pirithous. Likely she would not go the route of seeing Pirithous as Theseus’s unflattering double. Nor would she succumb to the lure of painting a subjectivity that would allow us to sentimentally identify with this prototypical anti-hero. For her Pirithous would be far too close to the slave reduced to nothing, as described by Sophocles, and the modern factory worker with whom she threw in her lot instead of pursuing a gilded academic career that was in the offing. Pirithous would be the familiar post-human, the human being as completely broken and used up, the refuse of the inhuman that accompanies the production of all the other forms of refuse that testifies equally to our rapaciousness and carelessness.

Pirithous is human being without drive, deprived of conatus essendi, a nothing which in a Nietzschean economy it would be bad taste to save. But, for Weil, it is precisely these nothings, the ones that have been pulverized according to necessity, that require saving. Yet, a Heracles-like rescue for the petrified is inconceivable: to rescue such is to rescue them precisely as beyond our will and affection, precisely to have become what Endo calls “the less than human.” How to imagine it then, if at all?

Weil brings us half-way there in her figuration of solidarity and identification. At the very least, and quite unlike Nietzsche, she encourages us to think that the hope for the petrified coming back to life rests in a supernatural love abiding with them. Although this love is precisely the contrary to petrification, in the form of representation and solidarity in which it takes on the form of the death that it would transform, supernatural love is endlessly patient in its mollifying the cold of being alone and at low heat allows the prospect of liquefying the stone. Weil is a thinker of the threshold who herself lives on thresholds, the threshold of Judaism and Christianity for one, the threshold of Stoicism and Platonism for another. At this second threshold Stoicism is characterized by the dialect of necessity and its prescription is acceptance, whereas Platonism is the dialect of freedom and its prescription is the hope in life that impossibly passes through death. In any event, Weil’s suffering Prometheus provides a template for her suffering Christ who casts off the mantle of the hero and takes his place among the petrified and the dead, precisely those who far more nearly resemble Pirithous than the escape artist Theseus.

As Weil stops at the threshold between Judaism and Christianity and Stoicism and Platonism she might be thought to hand off to Hans Urs von Balthasar. Balthasar is the Christian theologian who tends to put aside the Christus Victor motif, substituting for it the Paschal Mystery as focused in Holy Saturday in which Christ in Sheol is in solidarity with the dead thought to be without reason and will, or at the very best thought to manifest the merest vestiges of either. In a text such as Mysterium Paschale 2 Peter is read through the lens of Nicholas of Cusa’s imaginative experiment on thinking the subjectless dead. The how of the saving is a form of “being with” that also involves the representation of the dead, which means identification with, becoming one with them. This co-passion with the semi- and fully-petrified is the ground of the hope for their saving into a subjectivity which is living, elemental, and a doxology to the flesh precisely because one has become human for the first time.

Christ fulfills the promise of a victory over death that was the common illusion of Theseus and Pirithous, but does so engaging it and acknowledging human limits, by humbling himself before it, by renouncing violence and thereby cutting off the supply of counter-violence, by suasion rather than coercion, by energizing the slow recovering of memory and sowing the seeds of hope for a humanity that has rediscovered its will, but lost its lust for trespass.

Featured Image: Willy Pogany and Padraic Colum, The golden fleece and the heroes who lived before Achilles, 1921; Source: Wikimedia Commons, no known restrictions.