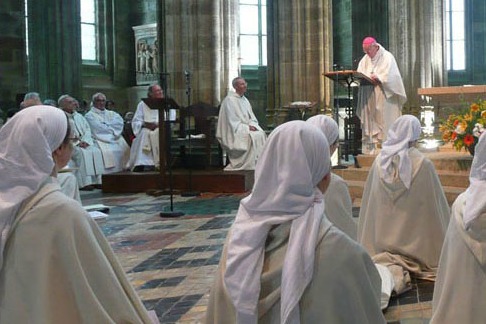 This week at Church Life, we're happy to publish an essay by one of our 2016 Liturgy Symposium presenters, Dr. Michael McCallion. Using the discipline of sociology, Dr. McCallion assesses the evangelization efforts of two parishes in the Archdiocese of Detroit: one that uses a rational-intellectual approach to evangelization, while another focuses on an affective-volitional one. According to Dr. McCallion, the affective-volitional approach has generated more activities associated with the New Evangelization than the rational-intellectual one. Thus, the former approach seems better placed to renew ecclesial life in the present.

Our editorial group spent some time discussing the findings of this article. While we were persuaded that an affective-volitional approach may be an essential catalyst in spurring activity within parish life, we also concluded that the article only measures the efficacy of evangelization at the level of the individual. That is, Dr. McCallion focuses primarily upon individual transformation that results in new forms of activity in parish life rather than the transformation of culture itself.

The tendency to treat evangelization merely as an individual's attraction to the Gospel is persistent in Catholic circles at present. Sherry Weddell's Forming Intentional Disciples does a marvelous job describing the nature of conversion at the individual level (with an array of implications for the formation of a culture), focusing upon thresholds of conversion. She writes:

...the thresholds are strictly focused upon one's lived relationship with God rather than one's baptismal status or knowledge of the faith. One of the fascinating things you learn as you listen is that some baptized and catechized Catholics have not even progressed as far as simple trust (the first threshold), while some of the unbaptized are much further along the road. A few may even be intentional disciples without having yet been baptized.


But Weddell's theory, at least at the level of individual conversion, does not immediately address the renewal of culture itself. She cautions again and again that catechesis (and thus theological education) is not the place to begin when carrying out the tasks of evangelization. She notes that cultural Catholicism, as it was lived in mid-century American life, is over. And her prescription to this problem is to begin anew with the evangelization of individuals one-on-one, which will of course, be part of rebuilding a culture. But, it's the act of evangelization that comes first rather than necessarily the renewal of the culture.

Of course, she is not wrong to offer this assessment. Culture does not take place in a vacuum and is always made up of individuals who are cultivated.

But like many pastoral leaders, Weddell perhaps overstates the claim.

...what matters is to evangelize man's culture and cultures (not in a purely decorative way as it were by applying a thin veneer, but in a vital way, in depth and right to their very roots) . . . The split between the Gospel and culture is without a doubt the drama of our time, just as it was of other times. Therefore every effort must be made to ensure a full evangelization of culture, or more correctly of cultures. They have to be regenerated by an encounter with the Gospel. But this encounter will not take place if the Gospel is not proclaimed. (20)


Thus, the task of evangelization cannot be reduced to increasing the number of intentional disciples within a parish (even if this increase is a good that should be promoted for the sake of the renewal of a culture). Nor for that matter is the success of evangelization reducible to New Evangelization activities within the parish as Dr. McCallion suggests.

Evangelization necessarily involves the renewal of cultures, making possible an encounter with Christ that is not dependent simply upon the charism of an individual person or persons at the parish level. It is a cultural renewal, embodied in forms of life. Catechesis, theological education, and the intellectual life are necessarily part of this cultural renewal and thus should not be so easily dismissed in today's Church. Both McCallion and Weddell would not want to dismiss them in the least; but there's a danger that in attempting to avoid one extreme (rationalism) that another takes its place.

How might this cultural renewal, attentive to both rational and affective aspects of life, take place? I'd like to play with the idea of a distinct kind of Benedict Option (one that involves the Rule of St. Benedict as my colleague Dr. Daniella Zsupan-Jerome suggests). Monasticism, which unites together the intellect and the will, freedom and obedience, the affect and vows, is integral to the kind of cultural renewal where evangelization can unfold.

The monk, as person, witnesses to a form of life that operates according to an alternative culture oriented around "cult" itself. Whereas human existence is often understood in the city and the suburb alike according to an economy of scarcity, of limited time and resources and money, the monk does not abide in this economy. The monk abides in the economy of grace, of gratitude, of prayer itself. As Adalbert de Vogüe writes in his commentary on the Rule of St. Benedict:

The whole life of the monk is in essence a search for God, and effort at prayer. But in this continual search and effort the hours of the office marks the beats at which the monk can recollect himself. If need be, they relaunch the impetus of incessant prayer. Seen this way, the office is not one act of the monk among many, not even the principal or the essential one; it is simply a particular way of doing the unique spiritual activity which fills his whole day—a discontinuous, collective, regulated way which should sustain a life of prayer that is continual, private, and spontaneous. (The Rule of St. Benedict: A Doctrinal and Spiritual Commentary, 134–35)


The monk desires to transform the entirety of existence into a way of prayer. From this life become prayer, become gift, an authentic development of a culture comes into existence. As Jean LeClercq comments upon the monk's relationship with culture, "In the eyes of all men, the whole ancient heritage belongs to the Christians who are guiding it towards its true destiny: the worship of God in the Church" (The Love of Learning and the Desire for God, 46). The monk can make beer, candles, manuscripts, stained glass, can compose literature and poetry, can host concerts, can build beautiful churches because the monk abides in a space of the beautiful gift of life itself. The monk participates in the liturgical and thus doxological existence that is the meaning of human life.

The monk is the fruit of evangelization.

Perhaps, then, we do need to offer affective experiences in the parish. We do need to lead people through thresholds of conversion. But, if we are to really carry out the work of evangelization, we also need something of this monastic culture to take over the life of the Church today. We need spaces of contemplative rest, of study, of friendship and prayer, in our cities. We need the concrete image of the monk as a sacramental sign intended to renew the world. And it's okay that the Church invests some of her time and money in building churches, founding monastic communities, and educational enclaves where formation takes place.

This kind of monastic renewal is itself a cultural renewal. Imagine a small group of monks and oblates who take up residence in the heart of the city:

They begin to pray the Office with regularity, to offer a space for contemplative encounter in the city.

They host lectures for the entire Diocese to attend on themes related to the spiritual life, to theology, to the arts, to all dimensions of human life where God is glorified.

They bring in poets and artists to perform in the city.

They open their space to feed the poor, to give drink to the thirsty.

They live a monastic life of prayer in the city, becoming a witness to the doxological orientations of all human life.

They make what they can on their own, showing humanity a way of life oriented toward deliberateness and gratitude rather than exchange.


Fundamentally, this community would offer an alternative culture for the world to contemplate.

This would be an act of evangelization not reducible to one-on-one ministry per se. It would involve such ministry but would also attend to the particular renewal of culture that only monastic life can provide. It would be affective but also rational. It would form the monk, and thus the world, to not place too much trust in one's affections, one's limited will, but in the gift of God that is the source of prayer itself.

And its focus would be on the very prayer and catechesis (and thus theological education) that so many find "ineffective" in the work of evangelization.

If the Church only evangelizes one-on-one, if the Church does not attend to this broader renewal of culture, then we are no longer a sacramental Church. We could become parishes of intentional disciples, who are intrinsically distrustful of the obediential dimensions of prayer and the life of faith.

We cease being Catholics who belong to the Church, and simply take up an individualistic approach to religion omnipresent in American society, shopping for the parish that best feeds our particular suburban approach to religiosity.

We look for Jesus apart from the Church rather than the person of Christ mediated through the sacramental encounter with the Scriptures, with the Eucharist, with daily prayer, with the concrete institutions of ecclesial life.

Intentional discipleship and one-on-one ministry is needed and always has been (and was ubiquitous in the cultural Catholicism of previous eras through families relationships and friendships).

But at the same time, the renewal of monastic life in cities and towns could have more of an effect than many proponents of evangelization ministries believe.

The presence of monks in the city, of oblates who commit themselves to a monastic form of life, makes present a genuine faith in culture that cannot help but renew the world itself.

So, yes, evangelization requires a culture to replace "cultural Catholicism." A monastic one.

Listen carefully, my son, to the teachings of a master and incline the ear of your heart. Gladly accept and effectively fulfill the admonition of a loving father so that through the work of obedience you may return to him from whom you had withdrawn through the sloth of disobedience. To you, therefore, my word is directed—to whoever, renouncing his own will in order to fight for the Lord Christ, the true king, takes up the brilliant and mighty weapons of obedience. (Rule of St. Benedict prol.1)


Yes, we must fall in love with Jesus. But, this falling in love can take place as we encounter those communities that live the commandment to pray without ceasing in every dimension of life.