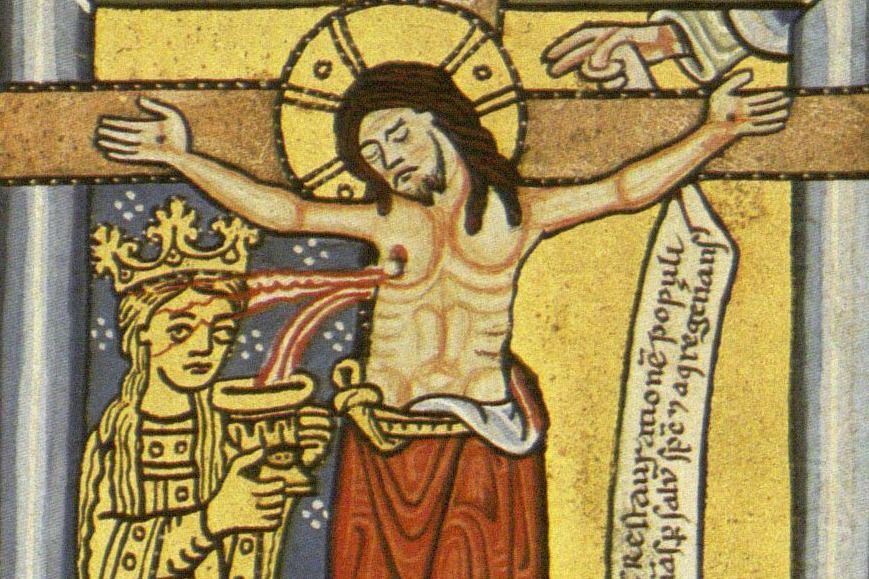 While this was our hymn in ecclesiology, I hoped that my students would find themselves saying this as they did their homework, prayed, or most especially, when they had the opportunity to evangelize. But an oft-repeated statement reared its proverbial ugly head every month or so: “I don’t need the Church to be close to Jesus.” (On one occasion I quipped, “You don’t need a parachute to jump out of an airplane, but it helps.”)

In our globalized society, we are used to a brisk work or school environment, fast food, and virtually unbridled capitalism. In our free market of ideas, we have the option to pick and choose what appeals to us. Especially in a post-modern context, the unchangeable Truth which ruled supreme is now cast aside in favor of what appeals to our ever-changing appetites. How can we as Catholics in a post-modern society live the Truth as it has been given to us? It is to live in the Truth that Christ constantly re-establishes for his Bride, the Church.

The Dogmatic Constitution on the Church Lumen Gentium recapitulated the teaching of Christ as head of his Body on earth, of which we are members. The teaching of the Church as a body with Christ as its head goes back to St. Paul (cf. 1 and 2 Corinthians) and the early Church Fathers. One does not have to search far nor wide for references in the Fathers, so we do not have to go over them here. Suffice it to say, the teaching that the Church is the Mystical Body went unused in theological discussions for quite some time. Several theologians in the nineteenth and twentieth centuries resurrected the term, and a new day dawned for the Church.

Henri de Lubac (1896–1991), a French Jesuit and eventual Cardinal of the Catholic Church, was one of those theologians who promoted the teaching of the Church as Mystical Body. De Lubac was certainly not the first in this series of theologians to bring the teaching of the Mystical Body back into vogue, but his approach involved synthesizing the teachings of the early Church Fathers into a coherent organism which would live on in the twenty-first century.

De Lubac’s ecclesiology was progressive for the pre-Vatican II era, so much so that the Vatican removed him from his professorship and censured three of his books in the 1950s. (De Lubac was eventually vindicated when Pope Saint John XXIII appointed him as a peritus—a theological expert—for the Second Vatican Council.) De Lubac looked to the early Church Fathers for inspiration, bypassing the Angelic Doctor in favor of a pristine view of the Church from her early history on earth. His vision for the Church on earth is one that, as we would put it mildly today, is quite orthodox. In his seminal work on ecclesiology, de Lubac wrote, barrowing from Origen that “the final result, the ‘truth’ of sacramental communion, was the union with the Church within whose heart the Word resounds, for she is indeed the real presence of the Logos.”[1]

This is the key to understanding the Second Vatican Council’s call for the renewal of the Church’s identity: the Church is the earthly manifestation of Jesus Christ—his bride, awaiting the Day of Judgment. The Church and Christ are of one flesh, a teaching beautifully reflected in the theology of marriage: “O God, who consecrated the bond of Marriage by so great a mystery that in the wedding covenant you foreshadowed the Sacrament of Christ and his Church. . .”[2] The married man and woman are a sacramental re-presentation of that one-flesh union. With this thought in mind, let us continue.

As has often been repeated ad nauseum, many well-intentioned people in the post-modern era view the Church as a faceless institution, one that has covered up the sexual abuse of minors, protected pedophile priests, and preaches a preference for the poor while members of the clergy watch from the warmth of their rectories. One does not have to look far for certain abuses than “the Bishop of Bling” who spent the equivalent of several million U.S. dollars renovating his episcopal residence in Germany. Faced with certain abuses and injustices that perdure in the Church, we cannot forget that, while the Church may be of divine origin, the day-to-day running is left to humankind who is prone to sin. Having said that, though, let us take assurance from de Lubac: “Still for us all today the coming of Christ in the person of his Church is at the same time both autumn and spring.”[3]

Many will view the Church’s self-identification with Christ as something wholly extra-biblical, but St. Peter reminds us:

Come to him, a living stone, rejected by human beings but chosen and precious in the sight of God, and, like living stones, let yourselves be built into a spiritual house to be a holy priesthood to offer spiritual sacrifices acceptable to God through Jesus Christ. (1 Pet 2:4–5, NABRE)


If that was not enough, we can even meditate on the words of Jesus:

I am the vine, you are the branches. Whoever remains in me and I in him will bear much fruit, because without me you can do nothing. (Jn 15:5, NABRE)


Separating oneself from Christ is not fruitful, nor is cutting oneself out of the edifice that is the Church. To be fruitful, we must allow our baptisms to be the dispensers of grace, allowing that divine life to work through us like the sun nurturing our growth. For us, though, it is the Sun of Justice that shines on us and edifies us.

All of this may seem easier said than done to one who has been personally injured by certain members of the Church. We must remember, though, the Church is the supernatural fulfillment of the natural human family in the Person of Jesus Christ. The unity enfleshed in the union of Christ and his Church presupposes the natural union of all humankind. “Thus the unity of the Mystical Body of Christ, a supernatural unity, supposes a previous natural unity, the unity of the human race.”[4] De Lubac harkens back to the Thomistic principle of grace building upon nature, but his argument is also pregnant with Cyprian of Carthage’s famous axiom: Extra ecclesiam nulla salus—outside of the Church there is no salvation. And this most certainly is true; all salvation that has, is, and will happen comes through the Person of Jesus Christ. It is the Church that dispenses salvation because Christ has given this power to her. The Church’s seven sacraments are the means to how her members receive grace and live out the divine life in the world, drawing others into this supernatural cohesion.

How do we as practicing Catholics draw women and men into communion, especially those who have been hurt or scandalized? It is living the divine life in the world, nurtured through the gift of the sacraments, and constantly building up our personal relationship with Jesus Christ, the whole Christ. This does not mean that we are allowed to have Christ to ourselves and leave his Bride by the wayside. To have a relationship with Christ means that you also have a relationship with the Church. If further encouragement is needed, let us remember how St. Paul chastised the Christians at Corinth (twice!) for their lack of charity toward their fellow members of Christ’s Body:

When you meet in one place, then, it is not to eat the Lord’s supper, for in eating, each one goes ahead with his own supper, and one goes hungry while another gets drunk. (1 Cor 11:20–21, NABRE)


One cannot enter into a relationship with Jesus Christ if one is not prepared to encounter him in the earthly manifestation of his Body, the Church. The Church’s liturgy constantly reminds us of this fact. In the Office of Readings for Friday of the twenty-third week of Ordinary Time, Blessed Isaac of Stella’s words echo in the ears of the Mystical Body:


It is not part of the Christian life to dissect Jesus Christ. The one-flesh union which God inaugurated in nature finds its fulfillment in the Church; Jesus and his Bride are of one flesh and nothing that man can do can tear them asunder. Owing to our nature being inherently good, the Son came into the world to wed to himself our nature, thus consummating humanity and divinity in his flesh. We are the offspring of that coupling and it is our sweet duty to harken to the words of the fourth commandment: “Honor your father and your mother, that you may have a long life in the land the Lord your God is giving you” (Ex 20:12). By Christ’s command, we honor not just our heavenly Father, but also our earthly Mother, the Church.

Many post-moderns will argue that having a relationship with Christ does not necessarily have anything to do with having a relationship with the Church. On the contrary, the Church is the Mystical Body of Christ on earth; the Church and Christ are of a one-flesh union. While the Church is Christ and Christ is the Church, the daily practical operations may not have been attended to in the best manner; no one can deny this. After all the fallout from heinous sins being committed in the last century, one should not be surprised to see a growing number of people who wish to prune themselves from the True Vine. It is up to the members of the Mystical Body to live the liturgical life of the Church, have a sacramental worldview, and bring the divine life into the world. This is how we will win people back to Christ’s Body on earth, but it will not be easy. Or, as de Lubac says, “Nothing remains intact without effort.”[5]